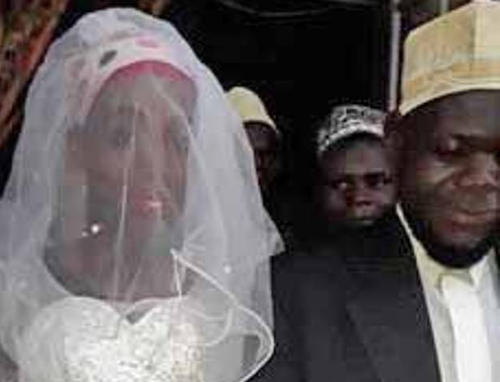 Sheikh Mohammed Mutumba on his 'wedding'

Today Friday, Mutumba, 27, appeared in court but the case could not proceed due to the absence of the chief magistrate Juliet Hatanga.

Mutumba was arrested earlier this month and charged with having carnal knowledge with a person against the order of nature after he wedded Richard Tumushabe alias Swabullah Nabukeera who posed as a woman.

The accused first appeared before the Kayunga Grade One magistrate Irene Akello on January 6 but was not allowed to take plea because his case can only be heard by a higher court. Their case was adjourned to February 5. Mutumba is jointly charged with Tumushabe. Prosecution alleges that Mutumba and Tumushabe committed the offence in December 2019.

Tumushabe’s true gender was uncovered by police officers who had arrested him on allegations of stealing a television set and clothes of their neighbour.

When he was body searched, police officers discovered that Tumushabe had male genitals. He has since given interviews saying he fooled the sheikh into a false wedding for economic reasons.

Mutumba has since been suspended from his cleric duties. He said he hadn't been intimate with his 'wife' since the wedding two weeks before because she told him she was menstruating.

Mutumba said he thought he was marrying a woman when they wed in a traditional Islamic ceremony (Nikah) back in December.

The Sheik new what he was doing until he got caught.
Cannot fool all of us.

Yes, he must have known the gender of that wife of his, even on the first encounter after marriage.

I am not convinced that the "sheik" was so ignorant of human anatomy to the extent that he continued to play that natural golf, scoring "goals-in-one hole" without realizing that it was the outer end of an exhaust pipe. [Even a very young suckling goat-kid knows its mama's anatomy and tries to access].
Report to administrator
-2 #3 Odongkara 2020-01-25 10:42
But my question for the courts and those who are castigating Mulumba, who can produce a convincing evidence that he had carnal knowledge with a male?

It is denial of justice to lambaste anyone based on our sentiments and assumptions.

This sheik guy hurt no one. WTF!!
Report to administrator
+2 #6 kibedi nkuutu 2020-01-27 11:46
Interesting case here! The Prosecutor must prove beyond reasonable doubt that the Sheik had prior knowledge of the sex of the "bride" before the marriage.

He also has to bring witnesses who can testify that the Sheikh had been in a relationship with the "bride" before the marriage.

In addition, the prosecutor must prove beyond reasonable doubt that both were having sex after the marriage.

So many proves to be made by the govt. side. What am seeing is a doomed case.....any criminal lawyer can win this case straight out. Good luck!
Report to administrator
0 #7 Zaitun 2020-01-27 16:07
"Mutumba said he thought he was marrying a woman when they wed in a traditional Islamic ceremony (Nikah) back in December."

Interesting statement, not so? How did you come to know the wife you married, where and who was your go-between? Was he that time, having a woman's voice?

Even before marying this young man, I am sure you had sexual relationship with him.

If you tell us the contrary, then you should be a liar who, as an Iman, was misleading the faithful who were suposed to be under your instruction.

It is incredible that you did not even notice the absence of brests, a well shaved guy.
Report to administrator
0 #8 WADADA rogers 2020-01-28 10:22
I agree with you Odongkara, it is impossible for any one to come up with such an ofence, how will they tell whether or not there was carnal knowledge with a person against the order of nature.

And if i may ask, who says the order of nature is the P with the V,
Report to administrator