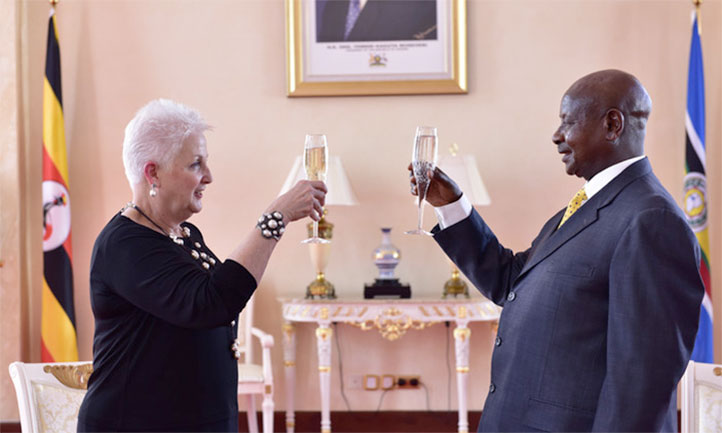 The outgoing US Ambassador to Uganda, Deborah Malac has warned that ultimately, governments that stay for long in power without a transitional plan often end up badly.

Malac, a known straight-talking diplomat, yesterday held her final press briefing at the American Centre as US Ambassador to Uganda after four years of service. According to Malac, failure by the current government to think about a peaceful transition and also plan for it has created frustration, raised concern and fear among citizens.

Malac was answering questions from journalists about the succession question in Uganda after President Yoweri Kaguta Museveni’s rule. She said that the longer you stifle people, the more you create more frustration and fear which often does not always end well.

She also warned against refusing expression on alternative view whether anti-corruption, politics and other rights saying these should be respected, and the government has an obligation to correct the bad things happening.

According to Malac, a transition will finally come to Uganda, and this could be through the generation change which is awaiting Uganda looking at the young population. She says majority of Ugandans are youth and will surely lead the change and they should not be blocked from speaking about succession.

"If you look across history, governments and regimes that stay in power for a long time and do not plan what comes next, it often ends badly. It is a separate issue when the transition has to come, when it should come. That is a conversation that Ugandans themselves have to have, but you know a transition will happen at some point because it must. None of us is immortal but the failure to think about and plan can be difficult but it creates that frustration, it creates that concern." said Malac.

Malac also urged government and security forces to allow Ugandans exercise constitutional rights and freedoms of assembly and expression. She also called for a free and fair election, saying all eyes around the world will watching what is happening in Uganda. Malac says unlike other countries, Uganda has the capacity to hold elections, and this should not be marred with irregularities.

She was also concerned against the misinterpretation of Public Order Management Act and its selective application when it is used to block opposition meetings and rallies but not used as the ruling party carries out its political activities.

Malac said the US as a nation will continue to help Uganda remain stable by supporting it from all areas of health, agriculture, security, education among others. Malac who retires with 39 years of experience in the foreign service will be replaced by Natalie E Brown, the current chief of Missions in Eritrea who is also a career diplomat like Malac.

Natalie is yet to be finally approved. Ambassador Malac departs the country on Sunday this week. Among her achievements, Malac has listed achievements in health like; dramatic improvement in the fight against Malaria, rapid response and detection of over 100 priority disease events over the past four years.

In education, she mentioned strong progress in improving basic literacy skills, improvement of farmers livelihoods, fight against gender-based violence, attracted US investments to Uganda and promoted Uganda's business in the US among others.

[The outgoing US Ambassador to Uganda, Deborah Malac has warned that ultimately, governments that stay for long in power without a transitional plan often end up badly.]

Akot, when a Super Power, especially America warns an African dictator to start packing his bags and he doesn't, but digs in; it means Ugandans must now know "the time is near".

In other words, "the African Problem", Mr. M7 may leave power in a "big bang"! Never say never!

The Ambassador seems to suffer from White Saviour Complex....

She behaves like she is much more concerned about Uganda's well-being than real Ugandans
...

But Emma, you sound like someone whose boat has been rocked by Amb Malac's warning.

E.g., where were you when e.g., on 26th January 2017, Mr. M7 told Ugandans and Diplomats, Malac inclusive; that he is in our State House "fighting" only for himself and belief, and that his is nobody's servant or employee?

Can such a statement come from a president who cares about the surplus poverty (87%), in which his countrymen, women and children are languishing in? NO!
Report to administrator
+2 #23 Lakwena 2020-01-27 08:26
And Emma who pays for 80% of our medical bills on especially preventable and communicable diseases like Aids and malaria (mosquito nets) now Yellow Fever? USAID!

In other words, blinded by you current comfort zone don't be ridiculous. E.g. if the US and international community withheld essential drugs including ARV for just one month, Ugandans, including Emma will be dropping dead like flies.
Report to administrator
+2 #24 Lakwena 2020-01-27 08:35
If e.g. the US, the EU, etc. conspire to place a travel ban on Mr. M7, family and his entire cabinet; what will happen?

A lot, because all other countries and internation Banks E.g. would also be reluctant to deal with Mr. M7 and Co.

As a result of course, many will be forced to go for medical treatment in Kirudu or Kawempe referral hospitals and/or die therein like all of us.
Report to administrator
0 #25 Akot 2020-01-27 20:08
Lakwena, thanks.

Happy New Year to you & family. Don't stop reminding us of what the Bible tells/warns us about!

Ambassador Deborah Malac was diplomatic, used words that should wake Ugandans to the danger of the end of Museveni, knowing the tribalistic system is a death trap!

USA/Europe will continue in silence even when Museveni is out/dead, waiting for Ugandans to put in place a governance acceptable by International Standard, then recognise it.

The tribalistic system Museveni will leave Ugandans in will NEVER be accpetable to devleoped countries!

The tribalistic system MUST be brought down FIRST & above all & this is not negotiable if Ugandans want to be part of the rest of the world!

Do Ugandans want Museveni out, then help from democratic developed countries, or not?...
Report to administrator
0 #26 Akot 2020-01-27 20:12
...Museveni is more a problem to "Ugandans" than to Africa as he will leave Ugandans in the divisive tribalistic system, without National Leadership & the outside world will watch wait...in silence!

Tribalists Libyans had to UNITE against Kadhafi, but unfortunately went tribally after & are still at armed war, right?

But Ugandans can UNITE to ensure Musevnei is out, then go for independent tribal states immediately or Reform the Republic.

While Ugandans fight one another, ensure Dr.S.Nyanzi is in prison for mocking Museveni, block mp Bobi Wine who has no right to meet/talk to them, who is fighting Musevnei & how is he going to be dislodged?

USA/EU will never get at Museveni as long as Ugandans go along in peace with him; it's the "people who chose who rules/governs them, how, for how long!

USA/EU will never impose change on Ugandans, but will go on in silence as long as our people are alright with the tribalistic system!

If Dr Besigye nor mp Bobi Wine got/gets UNITED support of Ugandans to ensure Museveni is OUT, then, how can USA/EU that are governed as the "people" want, get at Museveni, kept in post by Ugandans?

Going for next fake election will only legalise Museveni & confirm Ugandans are tribalists, tribalistically divided & ruled by him just as they want!

What would it cost Ugandans if they bring down the tribalistic system Museveni put in place without even consulting them, then UNITY to throw him out?
Report to administrator
0 #28 Akot 2020-01-27 20:57
It's time Ugandans wake up to reality & this before Museveni is thrown out by another demon or drops dead!

When things get messy out of control, UN will ensure diplomats are escorted to safety in Kenya & refugees/migrants are protected!

But Ugandans will be on their own!

Even tribes that consider themselves "nations" will not be protected by UN because they are not real nations recognised by International Community, but fake ones, as elections under Museveni are!

Isn't it time Ugandans close eyes, imagine how it will be when Museveni will be no more, but just them in the tribalistic system while the outside world watches in silence?
Report to administrator
123