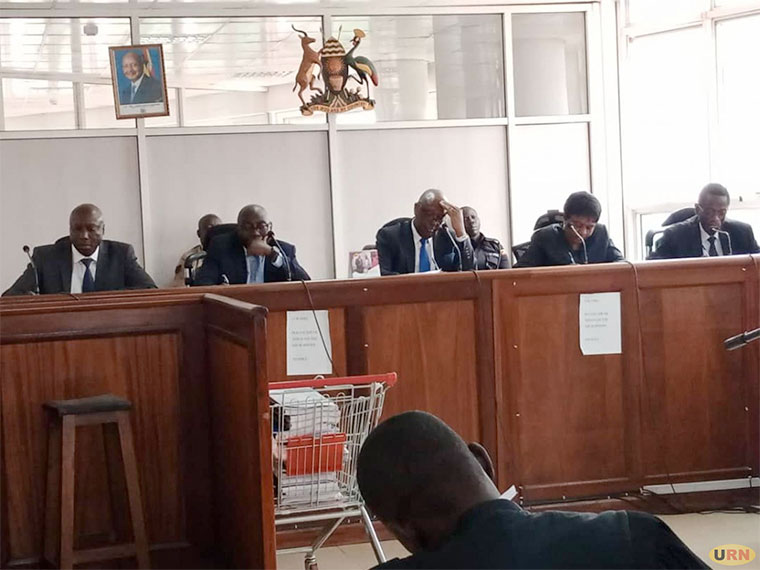 The Constitutional court has adjourned indefinitely passing judgement in the case in which businessman Hassan Basajjabalaba was dragged over his Shs 142 billion compensation.

This is the fourth time the panel of five Constitutional court judges led by Kenneth Kakuru has failed to deliver their ruling. The other justices on the panel include Elizabeth Musoke, Geoffrey Kiryabwire, Stephen Musota and Cheborion Barishaki.

Kakuru said today Thursday that the case file is huge and new submissions, which he didn’t reveal, keep emerging even when the judgement is ready. He explained that once they are satisfied with the harmonization of the issues, they will be delivering it on notice instead of working under too much pressure.

However, a lawyer who was in court and preferred anonymity alleges that the judges must be doctoring something in the verdict, arguing that it’s rare for the Constitutional court to send judgement notices to parties like they did when indeed the judgement is not ready.

The case arises from October 2010 and April 2011, when Basajjabalaba and his five companies using guarantees issued by the Bank of Uganda obtained $65 million (about Shs 238 billion) from four commercial banks including United Bank of Africa (UBA), Orient bank, Bank of Baroda and Tropical bank but failed to pay back the loan.

Basajjabalaba had been guaranteed the loans in question on allegations that he demanded government money in form of compensation to cater for losses caused to him as a result of the cancellation of contracts he had signed with the defunct Kampala City Council (KCC) to develop several city markets.

The businessman was reportedly meant to manage and develop markets including Shauriyako, Nakivubo, Nakawa and the Constitutional Square, but the same contract had allegedly been entered without the advice of the attorney general.

Following this, a committee was set up to verify Basajjabalaba’s claims against the government and it was found that his claim was worth only Shs 54.7 billion and not Shs 142 billion as he claimed. However, Basajjabalaba was not satisfied with the money and thus appealed to President Yoweri Museveni who also directed the then-attorney general Prof Khiddu Makubuya to handle the matter expeditiously.

The petitioner argued that the respondents conspired to commit corruption since the transactions were erroneously made. However, Basajjabalaba and his companies through their lawyers led by Caleb Alaka told court that the compensation was lawful since it was sanctioned by both parliament and the then Finance minister.

Why don't they resign or hang themselves like real professionals. I remember some doctors committed suicide during Amin's time to protest at this type of 'psychological torture'.

Go ahead and purge yourself, resign en masse and go away to work in another country. what will your children say in future if you do not act now?
Report to administrator
0 #2 Odongkara 2020-01-24 07:38
Basajjabalaba was just used as a mere conduit but the real deal is different from what is being given for us to believe. It's a public secret that all those holding office within the NRM party structures and government do so for one and only person call sole candidate Museveni which is the improved version of Idi Amin Dada's very raw Life president!

And believe me Kakuru is only play acting but the verdict is already posted on the wall in favour of SYKM the Leopard.
Report to administrator
0 #3 Lysol 2020-01-24 21:28
This guy should be sanctioned by the US Treasury Department and his assets freezed including of those affiliated with him. They know them.
Report to administrator