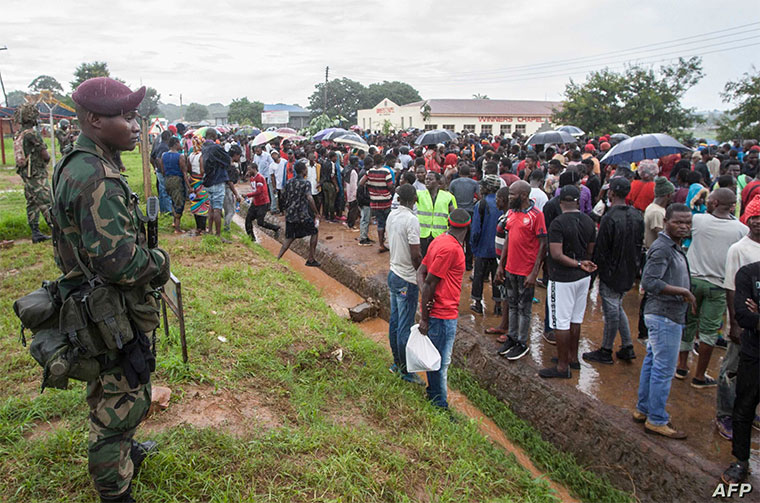 Malawi Defence Force members watch participants in Lilongwe, Jan. 16, 2020, during a protest against alleged attempts to bribe judges overseeing a legal challenge to the re-election last year of the country's president

LILONGWE, MALAWI - Tens of thousands of Malawians took part in protests on Thursday at alleged attempts to bribe judges overseeing a legal challenge to the re-election last year of President Peter Mutharika.

People took to the streets after the country's chief justice charged that the five judges presiding over the case had been offered kickbacks. The complaint, which was filed to the Anti-Corruption Bureau (ACB) on Monday, prompted a call for demonstrations in Malawi's three main cities.

Around 50,000 people gathered in the capital, Lilongwe, with smaller rallies in Blantyre and Mzuzu. They braved the rain and stood vigil outside parliament. Many wore white T-shirts printed with "ACB name and arrest the bribers now."

Opposition leaders say the May 21 poll, which saw Mutharika narrowly beat runner-up candidate Lazarus Chakwera, was marred by fraud. In August, they petitioned Malawi's top court to annul the results — the first time presidential election results have been legally challenged since the country gained independence from Britain in 1964.

"The ACB will act in a few days," Matemba told reporters on Thursday, promising Malawians would not be "let down.”

He said the body was investigating individuals named by the chief justice rather than political parties.

"This is our chance as the ACB to demonstrate to the people of Malawi that we can do better," Matemba added.

A court ruling on the election challenge is expected by the end of January. The ACB aims to complete its probe before then.

Sporadic demonstrations have broken out across Malawi since the election, with protesters demanding the ouster of the electoral commission's head over her handling of the vote. Many rallies have been met with violence by security forces.

But Thursday's demonstrations unfolded peacefully and no incidents were reported at any of the venues, according to police spokesman James Kadadzera. Mutharika has brushed off all doubts on the official results, which show he won just 159,000 votes more than Chakwera, a margin of around 3 percentage points.

+4 #1 Lysol 2020-01-19 00:07
If it was in Museveni's corrupt and oppressive Uganda those demonstarters would have been shot at, tear gassed, beaten up and arrested by the brutal and heavy-handed militias disguising as police.

In many civilized countries, the police always show up only to protect businesses and properties of individuals , just in case the demonstration gets rowdy.

The coward paranoia Museveni cannot allow this to happen in Uganda He is even afraid of his own shadow. He rules Ugandan s like he (hardman) keeps his zebus (aka semi-cattle?)
Report to administrator
0 #2 WADADA rogers 2020-01-20 19:42
Its the order of the day, in many African countries including Uganda, elections petitions are won by bribes
Report to administrator