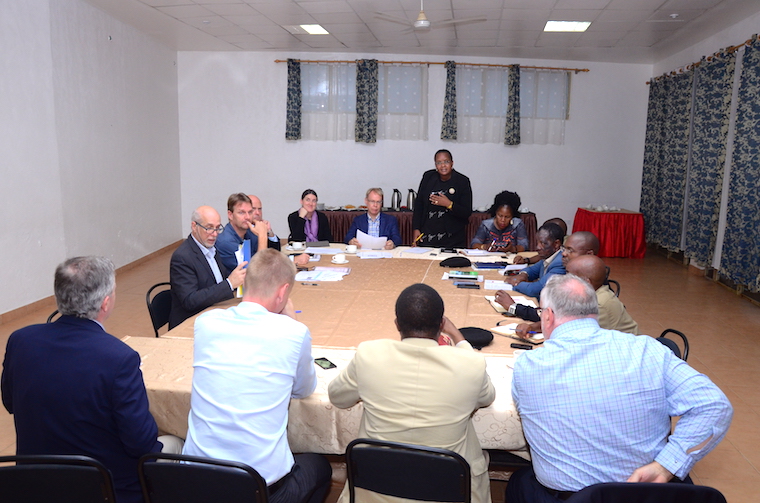 Eastern Uganda has been neglected, the EU ambassador to Uganda Attilio Pacifici has said.

Pacifici who is also the head of the EU delegation expressed concern that little effort has been made to exploit eastern Uganda's tourism potential and attractions through deliberate marketing and infrastructural development leaving the region to wallow in abject poverty.

According to official government estimates, most of Uganda's poor people are found in eastern Uganda and is also the region with the highest inequality rates.

“We have so many people that come to Kampala and then go north-west and leave a lot of wealth to the private sector that side. In the East, despite its beauty, it’s been neglected and we should all think about it,” Pacifici said.

Some of the eastern Uganda tourism attractions include Mabira forest in Jinja, source of Nile River in Jinja, Mt Elgon national park, Sipi falls in Kapchorwa, the rocky Lolui island, Sigulu island, Mt Elgon among others.

“There are shortages in terms of accommodation that the private sector needs to tap into. Let’s make this area easy for tourists because there’s room to bring more businesses here – a reason we chose it for this year’s retreat,” he added.

Pacifici said this at the opening of the first-ever four-day retreat for the eastern part of Uganda at Mt Elgon hotel in Mbale yesterday Monday.

“Already, the Austrian ambassador offered to set up a cable car unit system that will join Bududa to Mount Elgon and Sipi Falls. If we can pull that one off, we can attract more tourists to the East,” Mujaasi said.

Commenting on the inadequate accommodation, Mujaasi agreed with Pacifici that it’s an area that has been neglected.

“Some of the premium big hotels are Mount Elgon hotel, Wash and Wills and Mbale resort. Unfortunately, most of the middle class of the east are concentrated in Kampala which is giving us a problem. They need to come back and invest in such facilities especially in areas near Mount Elgon,” he said.

According to the EU press advisor, Emmanuel Gyezaho, the annual retreat is an opportunity for ambassadors to take time off their busy schedules to reflect on various issues of a selected region.

“It is very rare to have all of them free at the same time…This retreat is a unique activity to get all ambassadors in one spot because they regularly meet in Kampala but only deliberate as a group once every year outside the capital,” Gyezaho said.

He added that retreat also offers a platform for ambassadors to internally brainstorm about EU’s cooperation with residents and the government of Uganda so that they can better plan and strengthen their relationship.

In 2013, the EU took a decision to meet with people in various regions. The first retreat was later held in Arua in 2013 before extending to Kisoro, Gulu, Karamoja, Hoima, and now, Mbale. The delegation that set off to Mbale today comprises nine ambassadors to Uganda from Belgium (Dr Roswitha Kremser), Denmark (Nicolaj Hejberg Petersen), France (Jules-Armand Aniambossou), Ireland (William Carlos), Netherlands (Henk Jan Bakker), Sweden (Per Lindgarde), Italy (Massimiliano Mazzanti), Austria (Dr Roswitha Kremser) and the EU ambassador also head of delegation, Attilio Pacifici. The Austria head of office of the Austrian Development Agency, Dr Roswitha Kremser, is the only female on the delegation.

On Monday evening, the ambassadors engaged the Mbale LC V chairman Mujasi, chief administrative officer Esau Ekachelan and district security officers. They also met NRM leaders in the district while all opposition party leaders have been scheduled for Thursday in a separate closed-door meeting.

On Tuesday, the delegation will meet civil society organisations on issues related to governance, accountability and human rights, female genital mutilation and gender-based violence. They will also visit the EU-funded 10MW Tororo solar power plant. After Tororo, they will proceed to Malaba one-stop border.

“The whole idea at this border is to interact with customs officials to better appreciate inter-regional trade and discuss opportunities and challenges at this busiest inland post in the region,” Gyezaho said.

Tuesday activities will conclude with a visit to a flagship programme of the EU dubbed “Spotlight gender project” in Tororo that gives a second chance for girls who dropped out of school due to early marriages and teenage pregnancies.

On Wednesday, ambassadors will extend to the Kiprotich National High Altitude Training Centre in Teryet, Kapchorwa. Gyezaho said they will meet the state minister for sports, Charles Bakkabulindi, the International Olympic Committee and previous athletics champions with Joshua Cheptegei as the main attraction.

Cheptegei recently broke the 10km road world record in Valencia, Spain after setting a new time of 26 minutes and 38 seconds. In October, he was crowned 10,000m world champion in Doha among other prestigious awards.

The day will end with a guided tour of the Mount Elgon Park with Uganda Wildlife Authority before ambassadors interact with masses in Mbale through a radio talk show on local-based Elgon FM.

+1 #1 zzunguluzungulu 2019-12-10 08:46
Well, its better when a 3rd persons makes his/her opinion without any influence.
Report to administrator
+1 #2 WADADA rogers 2019-12-10 08:58
Tell them, we have said this before and the rest of the world thought we were looking for cheap popularity, we have been marginalized for head to toe and only used during elections.

When it comes to poverty, ignorance and diseases, no no where, just go to Busoga, Bukedi, Bugisu, Subregion, Teso and parts of karamoja.

Almost every good thing goes to western Uganda right. Roads in western Uganda are fixed by credible construction firms while ours are given to Dott service which takes ten years to fix one road and whichever part that the complete gets damaged before they handle the next part.

And when you find eastern singing "abewo", you wonder if they have brains.Somebody one time said poor people are easy to manipulate, and so be it for eastern.
Report to administrator
0 #3 Amen 2019-12-10 11:12
Neglected Indeed.
When you visit villages in Soroti and the surrounding environs, you appreciate the heading of the article further, 'then with squinted eyes', you ask yourself about the praise singers of the movement, and say, do they have eyes?, and if they do, is it their brains that do not process or simply put - me and my stomach and family!.

we are desperate, but thank God, this trend is making many to think broadly and we shall strenuously achieve.
Report to administrator
0 #4 Jama 2019-12-10 17:06
The best way the E.U could help the marginalized people of east and northern Uganda is to orient developmental projects directly to the concerned areas.
Report to administrator
0 #5 rubangakene 2019-12-10 21:51
Here we go again, the usual palaver that comes out of these useless retreats.

They dine and wine with ministers and whoever, forgetting the masses that make Uganda what it is.

You see, we Ugandans are not a tourist attraction, we are real people, human beings like you lot, eish! At the end of your tenure, you have nothing to show and nothing to write home about.
Report to administrator
0 #6 Lysol 2019-12-11 22:39
Not only the Eastern Northern Uganda is the most neglected by the tribal corrupt regime

Those parts of the country need a Marshall plan for development and catch up with the rest of the country. The next regime should come up with such a plan.
Report to administrator