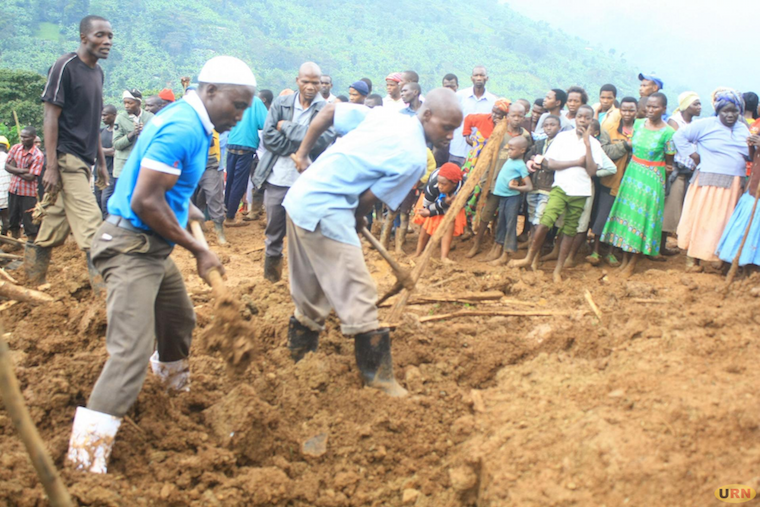 Locals attempt to dig out bodies from the debris

Four more bodies of people killed in the mudslides in Bududa have been recovered. This raises the number of retrieved bodies to 9.

The mudslides hit the villages of Naposhi and Namasa in Bushika sub-county following heavy rains on Tuesday. Residents have since been using rudimentary tools like hoes, garden forks and spades donated by Action Aid International to search for the bodies.

On Saturday, the Uganda National Roads Authority (UNRA) dispatched an excavator to help the local people's efforts in retrieving bodies. Wilson Watira, the Bududa LC V chairperson says that the situation has not changed much from the day disaster hit the district.

He said more bodies are still under the ground covered by the debris and that the driver of the excavator has fallen sick putting the work on a standstill.

“The operator of the excavator has fallen sick, that is why there is no work that have gone on but the efforts by the locals are still on-going,” he said.

Watira said the people who were affected have been advised to seek refuge with their relatives to avoid being put in camps which could result into an outbreak of cholera.

0 #1 WADADA rogers 2019-12-09 23:56
I dont know whether to blame Government, nature or the people of Bududa themselves, these landslides are happening every year but it appears nobody is prepared for them
Report to administrator