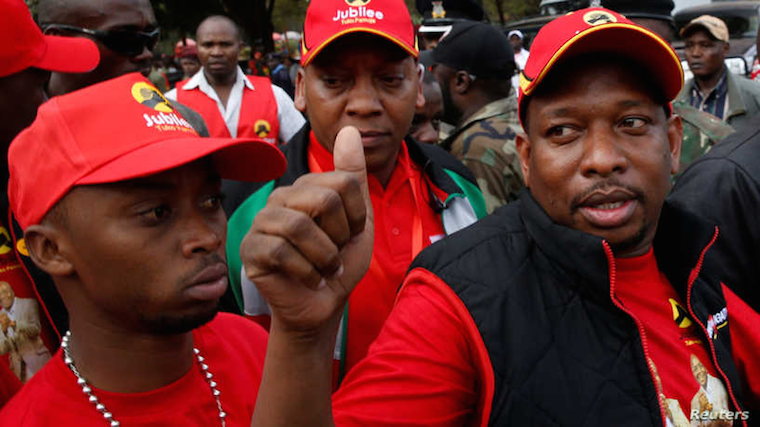 He said the governor and nearly a dozen senior Nairobi County officials face charges of unlawful acquisition of public property, money laundering and other economic crimes. Known for his chunky gold jewelry and impromptu raps, Sonko was arrested Friday on corruption charges, a high profile move in the government’s much trumpeted anti-graft push.

Haji said Sonko and his associates were accused of conspiracy to commit corruption, failure to comply with laws related to procurement, unlawful acquisition of public property and laundering the proceeds of crime.

According to Haji, investigations by Kenya's Ethics and Anti-Corruption Commission found enough evidence to warrant arrest and prosecution of Mbuvi and his accused associates.

"In making this decision, the office of the director of public prosecution is cognizant of the principal of innocence 'til proven guilty, the determination which can only be made by a court of law," Haji said. "The decision to charge is based on the evidence that is available ... at the time the decision is made."

Last month, Sonko tried to stop the Corruption Commission from investigating him but the courts declined to issue a temporary restrain order. In Friday's briefing, Haji warned Mbuvi's supporters against any attempts to subvert the cause of justice.

"In recent times, we have seen that corruption fights back, and there have been blatant misguided attempts to intimidate, threaten and malign investigating officers and agencies," Haji said.

"We shall not allow such acts to go on and I have directed the law enforcement agencies to investigate any such attempts and upon establishment of evidence, additional charges shall be preferred against those perpetuating these acts."

Kenya's President Uhuru Kenyatta has in the past said that he will not relent in the fight against corruption until the country is swept clean of the practice. For critics such as political analyst Herman Manyora, such comments sound like mere talk.

"Even all this drama around the arrest, where is a single conviction?" he asked. "Even in instances where people have owned up for having received money from National Youth Service, without having tendered for anything, they have admitted as much, they are not in jail. Where is the will? I am not convinced there is a will to fight corruption."

Sonko and his assistants did not respond to calls seeking comment. Citizens and international investors have long complained of corruption in Kenya, East Africa’s business hub and richest economy.

In the slums of Nairobi, Mbuvi commands a lot of support because he has presented himself as a defender of the poor. Sammy Oloo, who leads a garbage collection unit, blamed politics on the governor's woes.

"He is the governor and he has tried, he is looking at all corners in Nairobi," Oloo said. "The youth in Dandora, Kayole, Huruma are at work. They should instead support him to help the youth. That's better than these politics, that they are playing for their own interests."

Despite the vows by Kenyatta and his predecessors, corruption has remained deeply entrenched in Kenya for decades. The 2018 Corruption Perceptions Index by Transparency International listed Kenya as the 144th most corrupt country out of 180 in the world.

Sonko, a former senator, was elected in 2017 after years of news splashes featuring his flamboyant lifestyle and flashy fashion, complete with ubiquitous chunky gold jewelry and eye-catching hairstyles.

After Kenyatta and Deputy President William Ruto faced charges of crimes against humanity following the disputed 2007 elections and subsequent violence, Sonko showed up to the proceedings at the Hague-based International Criminal Court with “Uhuruto Not Guilty” dyed into his hair.

He was recently photographed using a gold-plated iPad and matching iPhone and has appeared in rap videos gyrating in public offices wearing gold-colored trainers while insulting political opponents.

He invited a storm of public criticism this month after he shared photos online of his dining room, featuring a gold-plated lion statue, and a gold-tinted dining table and chairs.

He has recruited hundreds of people into his “Sonko Rescue Team” who sweep out streets or appear at fires wearing “Sonko” branded red boiler suits in Nairobi’s poorest neighbourhoods.

On Thursday, Sonko received an award sponsored by the Kenya Red Cross and United Nations Volunteers for encouraging volunteering.

Sonko has been photographed handing out cash for things like hospital bills, but Nairobi has seen little improvement in public services under his watch.

Nairobi’s public schools and clinics are crumbling, roads are potholed and hundreds of thousands of people live in slums without access to electricity, sewage or services.