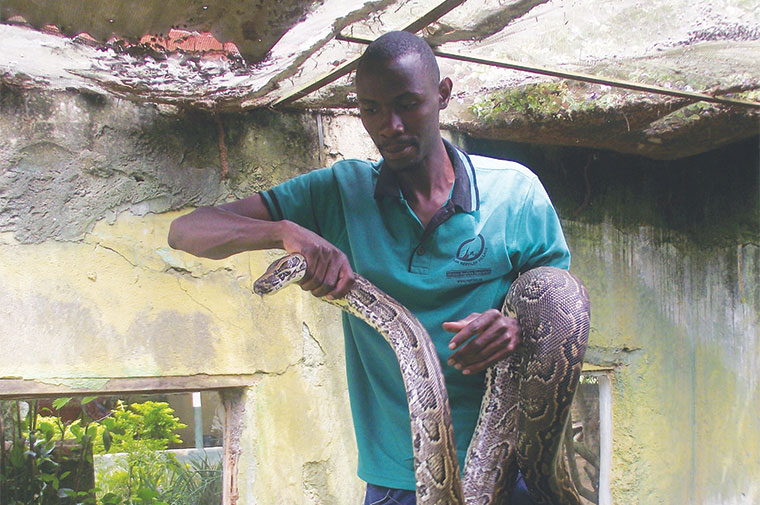 Lawrence Lutaaya with a snake at the Reptile Park

Entebbe Municipality is home to the Uganda Wildlife Educational Center (UWEC), formerly the zoo, and the Uganda Reptile Village/Park, where accidents with the venomous reptiles can happen.

However, no clinic, hospital or drug shop has venom antidotes. Even the government hospitals in Entebbe, known for their rabies remedies, have no venom antidotes, as NELSON EDWARD KASIMBI writes.

Cobras, pythons, vipers, name it…the more massive or venomous a reptile is, the more curious people it will attract at both UWEC on shores of Lake Victoria and Uganda Reptile Village in Bunono, Entebbe municipality.

The Reptile Village was formed in 2003, by a group of youth in the community, with passion to conserve endangered reptiles, including snakes, chameleons, monitor lizards and more. Such parks generate a lot of taxes through tourism, but it is not lost on us that many reptiles are venomous.

Snakes roam freely even outside these protected areas and one can get a snakebite from one’s own garden or house. And therein lies the complication: it is so hard to get an antidote in hospital, and Entebbe communities, where this story focused, depend more on first aid and uncertified traditional methods of treatment that are not always successful.

The Observer recently visited private clinics, drug shops, and Entebbe general referral hospital, to find out whether the health facilities were equipped with venom antidotes and the findings were worrying.

Fatuma Nakayi, 37, a resident of Bunono, said the lack of venom antidotes is a problem for the village because in case of a snakebite, victims have to be transported to a government hospital in Entebbe town for treatment, which is quite far.

Nakayi said, “As a person who resides in Bunono where the reptile park is, I am very worried, we have no place to go for treatment. Victims have to travel about 4km to Grade B hospital for treatment.”

Zamu Wasswa, a village leader, was happy with the number of clinics and drugstores in Bunono, and feels people such as Nakayi have no reason to worry, but she could not confirm whether any of them provided remedies for venomous bites. The Observer talked to a nurse at a local clinic, who requested anonymity, and she said the village not only lacks venom antidotes but also has very little first aid knowledge, in case of a snakebite.

This is not different from many parts of Uganda. But Lawrence Lutaaya, a tour guide at Uganda Reptile Village, says the park has partnered with the Entebbe general referral hospital to treat people who have been bitten by snakes, strictly at the park.

“These antidotes are too expensive; a dose is around Shs 300,000 and is hard to be stored. To make matters worse, each venomous snake has its own antidote – you don’t just buy – yet some people operating the clinics and drug shops, are not knowledgeable about snakes and don’t know the antidotes to stock,” Lutaaya said.

But Dr Kepher Baccwa in the department of community health at Entebbe general referral hospital, admitted that the hospital has no venom antidotes; not in the pharmacy, not in the store, saying government stopped procuring such antidotes since their demand was low.

“The hospital has no anti-venom antidotes; even the anti-rabies, we have a few doses. There are two reasons as to why government has not procured venom antidotes; first, they are very expensive. A dose costs between Shs 400,000 and Shs 450,000. Secondly, the demand is low,” he said.

So, what if a person actually got bitten by a venomous snake and was rushed to Entebbe general referral hospital for treatment? Baccwa said: “You have to know that 95 per cent of the snakes we have in this country, are non- venomous and that is why there are rare cases of snakes biting people. But if at all it happens, what we do is to first support life, and then refer the patient to an appropriate hospital for further treatment,” he says.

According to The Surgery hospital in Naguru’s website, there are about 200 snake species endemic to East Africa, most of them harmless or very rare. In Uganda, six of those species are poisonous and can be fatal. These are the puff adder, gaboon viper, Jameson's mamba, black mamba, forest cobra and the black-necked spitting cobra.

“Ministry of Health procured enough venom antidotes, and for the issue of not supplying the antidotes in hospitals, maybe you can crosscheck with the National Medical Stores in Entebbe,” he said.

At the National Medical Stores, a procurement officer who only gave her name as Esther, said the venom antidotes were in plenty, but hospitals have to request for them before they are supplied.

“We can’t just supply the antidotes before they are requested for by the hospital, because they are not essential medicines, like Coartem [an anti-malarial drug],” she said.

At least for the residents of Bunono, one fact can ease their distress: since the Reptile village was started, there have been no cases of snakes escaping and harming residents.

First aid in case of Snakebite

My uncle told me that a lion once killed its minder there. The minder would wait when the lion was sleeping and then he would extract the meat meant for the lion so he can exchange the same for "waragi". Alas that fateful day, the lion acted swiftly and put an end to that "corrupt practice"!
Report to administrator