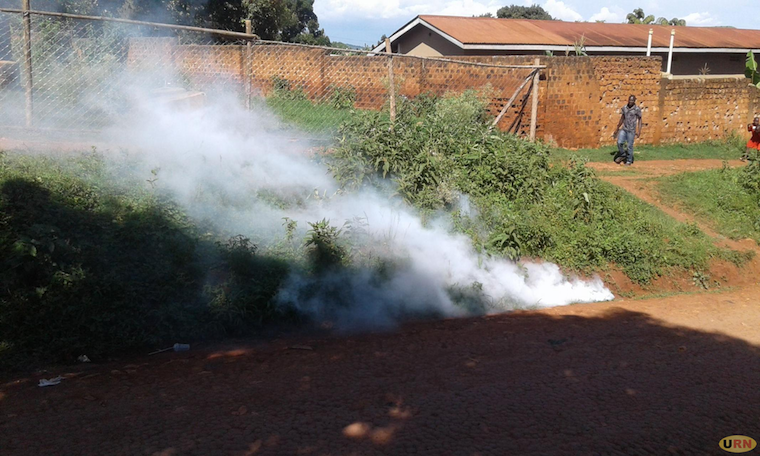 They were chanting People Power slogans as they followed the legislator as he walked to his vehicle that was parked about 500 meters away from the burial place. Police officers attempted to block the group that kept growing to clear the road for traffic in vain.

Joseph Turya, the Katonga region police spokesperson, says they were forced to use tear gas to open the road which had been blocked by the huge crowd to ease movement for other road users.

He explained that whereas several people turned up for the ceremony,  a section of the mourners decided to block the road demanding that Bobi Wine addresses them making it difficult for others to drive away.

Earlier on, Bobi Wine, who arrived late for the funeral, had been stopped by security from accessing the VIP tent but the crowd forced security to find a seat for the 'ghetto president' when they booed down security and shouted down ongoing speeches.

Kaggwa collapsed and passed away on Wednesday morning while driving himself to work. Speaking at the funeral, Al Haj Moses Kigongo, the National Resistance Movement (NRM) vice chairperson, challenged people holding positions of responsibility to emulate the late Kaggwa by availing themselves easily to citizens.

According to Kigongo, Kaggwa wasn’t in the class of people who show off because they hold positions of responsibility in the country. Kigongo also challenged leaders at all levels to assess their behavior to ascertain whether they would be mourned and praised like Kaggwa.

The vice president Edward Kiwanuka Ssekandi delivered President Yoweri Museveni’s condolence message and Shs 10m to the family. He commended the late Kaggwa for dedicating his time and effort to promote human rights at both the national and international levels.

Museveni said that during Kaggwa’s tenure as chairperson Uganda Human Rights Commission, he ably led the institution in implementing its national mandate of protecting and promoting human rights. He noted that Kaggwa will be remembered as a qualified man who steered the commission to the level that made everyone proud.

Several speakers at the funeral highlighted the deceased’s good deeds and hard work in various capacities. Kaggwa represented Kawempe South constituency in the Constituent Assembly and in the sixth parliament.

He also served as state minister in the Office of the President and represented Uganda in the East African legislative assembly. Sheikh Umar Bakar described Kaggwa as a trustworthy person, unlike private school heads who are fleecing parents with demands for unnecessary requirements.

He noted that it is unbelievable that most private schools demand various requirements such as reams of papers from learners even in nursery level who can’t use them.

If the likes of Kaggwa’s conduct is plausible, then what stops the rest of you to follow suit? We would then have a progressive country!
Report to administrator
+1 #2 Lakwena 2019-11-22 14:38
How pretentious and ridiculous that Mr. M7, a master of violence and human rights violator (criminal against humanity); "commended the late Kaggwa for dedicating his time and effort to promote human rights at both the national and international levels".

In other words, thru VP Sekandi, wasn't Mr M7 dancing on the grave of M Kaggwa (RIP a defender of human right)? Just asking.

That is even the more reason he shamelessly sent brutal police (hatchet men) to brutalize the mourners.

But the security men/women who are doing Mr. M7's dirty work, meting out violence on Ugandans should be reminded that: God will use them as the fuel (firewood) to burn Mr. M7 in hell. Wahurura?
Report to administrator
0 #3 Richard 2019-11-23 21:57
He was a movement supporter. When did he realise things were not how supposed it should be? May be too late now
Report to administrator
0 #4 Zaitun 2019-11-24 10:19
This government is funny indeed. After speaking ill of people, you shamelessly heap praises on your so-called enemies once they are dead.

You can not convince Ugandans by playing lions and antelopes in Kabalega Game Park.

You even go tear-gasing people whose only crime is to attend a burial of a respected man, and then waving to Bobi Wine. How insane you have become to think that all who wanted to hear his voice were his political supporters?

In a democratic country where Constitution is upheld, people have the right of association, whether that is political or social. But have no right to torture innocent citizens, keep them as suspects, prisoners... in hidden safe houses unless proved guilty before courts of law.

All this government is doing over the years are contrary to the established (but abandoned due to ill-will) laws of the country.