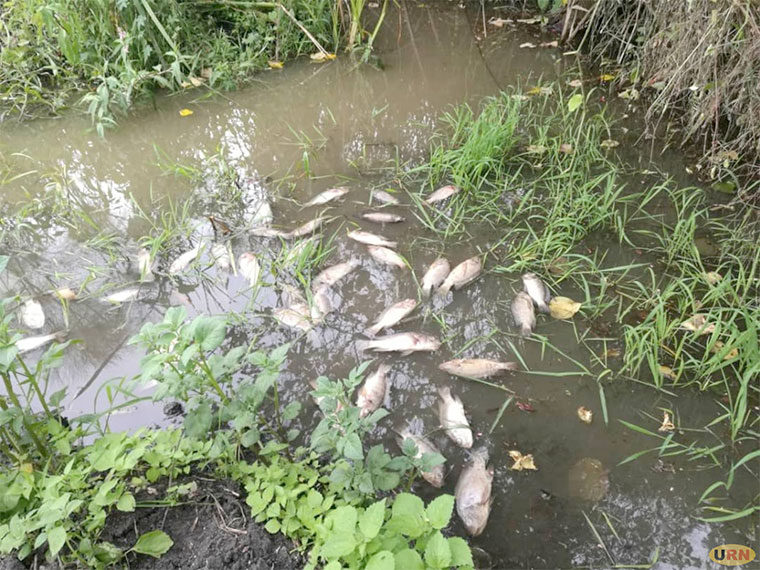 Some of the dead fish floating on the lake

Ntungamo district authorities have suspended fishing activities on Lake Nyakiyanja following the death of hundreds of fish due to suspected poisoning.

Amos Besigye, the Ntungamo district fisheries officer says their decision to suspend fishing for two weeks, was informed by findings from their initial investigations, which showed that residents used non-selective chemicals that killed the fish.

Besigye cautions residents to desist from what he refers to as irresponsible use of chemicals and pesticides to catch fish, saying it is dangerous to aquatic life. He said the toxins in the dead fish can easily be ingested into the body. Besigye also said farmers near lakes and swamps should leave at least 30 metres if they are to carry out any cultivation.

Ntungamo district agriculture officer Esther Atwiine says they are working closely with the environment department to ensure that the incident isn’t repeated. Samson Magyezi, a resident of the area, says some residents reportedly used poison to clear some swampy areas, which ended up killing fish.

Francis Bagumire, a fisherman faults government for failure to institute measures on safe pesticide and chemical usage. He says that the incident is a big challenge to the fishermen since they rely on fishing for their livelihood.

Ntungamo resident district commissioner, George Bakunda, says the district leadership will roll out a sensitization campaign to ensure that residents desist from practices that compromise the safety of the environment and aquatic life.

Our Coffee Roaster..the best in Africa was Looted and Sold to Rwanda...Now Fishermen are using Deadly Chemicals to catch Fish...My Foot!!!!!

GOD in State House is telling his Sweet Lies to Neo-Colonisers that his Kingdom will ensure Free and Fair Elections in 2021..Hahahahahahaaa
Report to administrator
0 #2 rubangakene 2019-11-21 23:03
We have said times and times again that 'greed breeds greed'; why can't these lot get it in their little minds that the same fish could end up on their own plates, leave alone killing other innocent, unassuming country folk.

They only think about the huge profit they will get in order to go and squander the same on "busheera". This country has really gone to the dogs!"
Report to administrator
0 #3 Lakwena 2019-11-23 19:07
Quoting Kikomeko:

Our Coffee Roaster..the best in Africa was Looted and Sold to Rwanda...Now Fishermen are using Deadly Chemicals to catch Fish...My Foot!!!!!

GOD in State House is telling his Sweet Lies to Neo-Colonisers that his Kingdom will ensure Free and Fair Elections in 2021..Hahahahahahaaa

Kikomeko, the country is being cannibalized and poisoned before our own eyes. E.g., when it comes to agrochemicals, it is a shauriyako affairs as there is no monitoring by experts.

In other words most of our illiterate peasant are deadly: they can't read the instructions on the chemical bottles or packaging. The next epidemic that will cripple many Ugandans is cancer.
Report to administrator