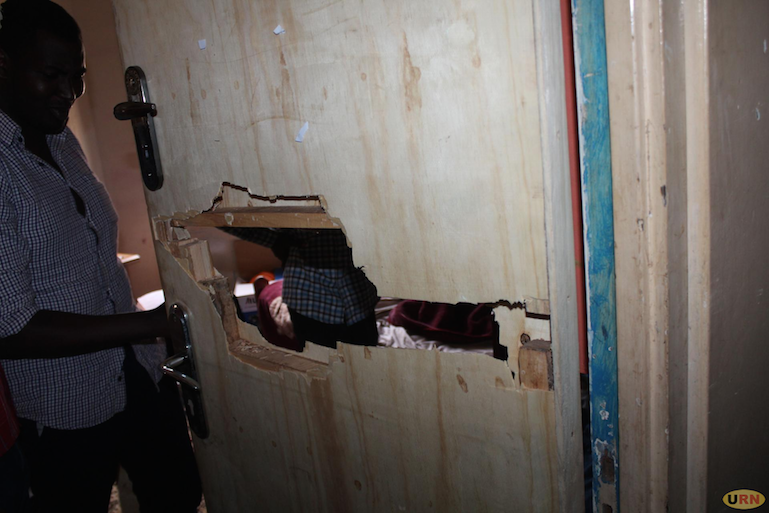 A students shows a vandalised room

21 students of Makerere University whose property was destroyed by security personnel during protests against the 15 per cent tuition increment have been compensated by General Salim Saleh.

Patrick Nsamba, the guild representative councillor (GRC) for Lumumba hall says that during a meeting with Saleh and 15 student leaders at his Kapeeka industrial area in Nakaseke district on October 7, the affected students were compensated with Shs 21 million.

“Out of goodwill, the general condemned the act of brutality by the military and sympathized with the victims of this act. It was this spirit that he decided to make a personal compensation up to a tune of Shs 21 million to these students,” Nsamba who also doubles as the guild finance minister said.

Others are Joseph Mukamba, Alfred Taremwa, Micheal Maganda, Tadeo Nyakoojo, Abiney Kitooke and Ivan Oyesigye. According to Nsamba, whereas there were calls for compensation of students with medical bills arising out of brutality, the money offered by Saleh could not handle both property and medical bills.

David Fredrick Nyanzi, a 3rd-year law student and the president Makerere Law Society wonders where the relevant stakeholders in the education sector were to warrant the intervention of Saleh.

“Salim Saleh, I don’t want to believe he is trying to buy off the students but maybe that is also another thing that should be debating about because that compensation was not publicized. Why didn’t they say it in the open that Salim Saleh is compensating, why didn’t they come to Lumumba and ask the students because also compensating through some students’ leaders may not be effective,” Nyanzi observes.

Nyanzi also wonders why the compensation was not institutionalized and only handled by an individual.

"My first question would be who is Gen Saleh acting as when we have a minister of Education who is also the first lady. Why isn’t it the first lady to come out and compensate? One would wonder why. I don’t want to dwell so much in that but we're having so many stakeholders who should be doing what Salim Saleh did. Maybe he did it as a retired army personnel but I would like to believe that there is a unit in the army that is in charge of that because what was vandalism was by done by the army but I would like to think also institutions also supposed to do what they are supposed to do." said Nyanzi.

Joshua Lawel Muhwezi, the 85th guild information minister insists that the students’ leadership is still as determined as it was on the very first day they set out with the students’ demands.

“Our demands shall not and shall never be compromised until they are responded to. The management is making all efforts to divide us using those that are among us (fellow students) and many have bowed to their favours and chosen to be administrations channel of propaganda,” Muhwezi noted.

He urged the students with compensatory issues to register with their leaders with proof of vandalized property for the guild to lobby for compensation.

“I would like to congratulate guild leaders from Lumumba hall who effectively managed the process of compensating their residents whose property was vandalized. We encourage all those who were not captured to register with their respective guild representatives with evidence for compensation,” Muhwezi adds.

The alcoholic half-brother(aka the brother's keeper or fixer) used to smuggle liquor and ammunitions to Kony during their so-called NRA/ LRA war He is known to be the godfather of Kony's eldest son who is named after him as Salim Saleh.

That may have been the region why Kony was never completely defeated.

Saleh joint the bush war after being kicked out of the former Soviet Union (now Ukraine, Kiev) where he went to study, because of his mental illness. Not to mention his mass killings in Luwero bush war. He has been banned to travel abroad, anyway. The money(and other resources) they looted from DRC and Uganda will one day be recovered
Report to administrator
0 #12 rubangakene 2019-11-21 23:40
You can't just buy peoples' conscience by money every time someone fights for their rights and is aggrieved; this smacks a "bribe to shut honest dissent".

It reminds of a rat that biting your toes and when you flinch, it blows cool air over the wound and you go back to sleep, after a while it resumes biting and feeding on the same toes.

This will not wash, we must address the real underlying issues once and for all; not sweep in under the carpet with a few shillings!
Report to administrator
0 #13 ejakait engoraton 2019-11-22 13:03
I have always equated this kind of behaviour to someone who is car jacked in the middle of a forest , and the car jackers put him in the boot (of his own car) and drop him off at the next trading centre.

And the victims narrates to the population what a kind lot of people the car jackers were, because according to him, they could have shot him, or they could have left him in the middle of no where.

Such are these rulers of ours, they brutalize the people, steal the tax payers money, and one of them comes out and pays lip service, and then uses their own money to "compensate" them.
CRY THE CURSED COUNTRY.
Report to administrator
12