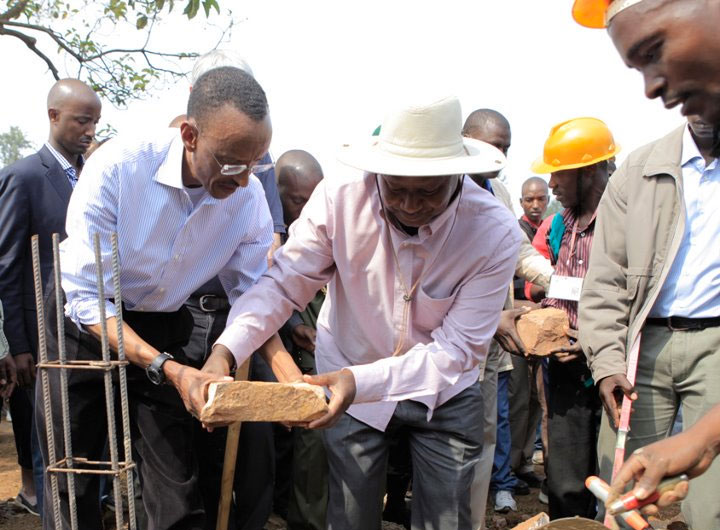 Museveni with Kagame during the good old days

Uganda and Rwanda signed a pact to ease tensions but they are ferociously flaring up again three months after President Yoweri Museveni and his Rwandan counterpart Paul Kagame put pen to paper.

The pact was signed on August 21 in the Angolan capital Luanda under the careful watch of Angolan President Joao Lourenco and DR Congo’s Félix Tshisekedi.

The deal was signed six months after Rwanda closed its northern Gatuna border with Uganda, accusing Kampala of illegally detaining its nationals and supporting elements determined to topple the Kigali regime.

As suspicion between the two countries grows, a follow-up meeting of the Luanda pact, which had been scheduled for November 18 in Kampala was called off at the request of Rwanda, days after Kampala sent a protest note to Kigali over the shooting dead of two Ugandans, Job Ebyarishaga and Bosco Tuhirwe, who were accused of smuggling tobacco into Rwanda.

This was before Kigali wrote to the secretary general of the East African Community (EAC), Libérat Mfumukeko, calling off the EAC summit meeting that had been planned for November 30. Kagame is currently the EAC chairman.

This came after news spread of Rwanda’s arrest of two Ugandans; 50-year-old Amos Tibesiga and Gilbert Beingana (24) who had gone to visit relatives across the border.

Rwanda has in the past accused Uganda of illegally detaining hundreds of its nationals in cells operated by the Chieftaincy of Military Intelligence (CMI) and Internal Security Organisation (ISO).

Human rights lawyer, Gawaya Tegulle of Thomas & Michael Advocates who represents some of the detained Rwanan nationals, said despite securing a writ of habeas corpus to compel the security agencies to produce the detainees, the court orders have largely been disregarded.

“We have managed to keep track of some of the detainees, but not all. It is our estimate that as we speak, there’s anything between 100 and 200 detainees tucked away in the dungeons of ISO and CMI. Although the security agencies are quick to arrest in the name of the law, they are completely defiant when the law requires them to comply with the basic tenets of rule of law,” Tegulle said.

Tegulle claims that he and the respective families had lost track of some of his clients notably, Eric Rugorotsi, Davis Twahiirwa and Deus Gasana who were reportedly picked up by ISO.

“We are also curious about Nsabimana Moses who was taken to CMI but is apparently no longer in their custody, yet he is not at home and no one, whom he would ordinarily have contacted had he been still alive, has heard from him,” Tegulle said.

On October 22, about 35 detainees were distributed to various courts in Kampala, Mbarara, Mubende, Mityana, Hoima, Kanungu, Kisoro and Ntungamo where they were charged with illegal entry or overstaying their interstate permits.

“All these are political overtures but the way the Ugandan government has treated the detainees doesn’t respect the ongoing attempts to repair the relations between the two countries,” Tegulle said.

Interviewed, the minister of state for Foreign Affairs, Okello Oryem, urged Rwanda to stick to the Launda pact since it sets out the modalities for addressing the disagreements.

“All the allegations Rwanda is coming up with are not new, any allegation they have should be addressed in accordance with the MOU [memorandum of understanding] we signed in Angola. It provides for how to deal with these issues,” Oryem said.

Oryem also challenged Rwanda to explain why it called off the follow-up meeting on the Luanda pact because Uganda as hosts had everything ready.

Rwanda’s High Commissioner to Uganda Maj Gen Frank Mugambage was on November 15 among the guests at the launch of the Eriya Kategaya memorial lecture as Uganda commemorated 20 years of the revival of the EAC at Imperial Royale hotel in Kampala.

While he freely interacted with government dignitaries and other guests, he declined any media interviews.

+1 #1 Mubiru 2019-11-20 18:30
It is ridiculously appalling that personal issues, ego and feeling of inferiority/superiority complex between the two leaders could be responsible for the nonsense.

Why is it that before Kagame and Museveni became Presidents Ugandans and Rwandanese were living peacefully together.

Abanyarwanda were the main labour force on which the Madhivanis and many sugar industries depended. They were partly the backbone of Uganda's civil service. . The late Frank Kalimuzo a very polished and well educated Munyarwanda was one of the many of his tribes who contributed enormously to Uganda,s civil service.

The then two "young" men now "jaaja" are responsible for this fiasco, which results in the "grass" to suffer. Thats "when elephants (Museveni vs Kagame) fight the grass(poor Banyarwanda and Ugandans) suffer.

There is nothing serious between them apart from imagining that one is superior to the other. Agreements are mere pieces of papers easily torn like ballot papers in stealing votes.
Report to administrator
0 #2 Akot 2019-11-21 00:13
Mubiru, agreed, but,

Kagame is in their country while Museveni if out! Kagame knows who Museveni is & wouldn't want him back in Rwanda!

Museveni uses Uganda & it's resources to make his stand with Kagame! While Rwanda is on the path of development given as e.g by develolped world, Uganda is sinking & Museveni doesn't care in what state he will leave it, nor how tribally divided & ruled Ugandans will pick up the pieces & restart!

Is it not Ugandans who teargas, harass, arrest, try one another in court & lock one another in prison (Dr S. Nyanzi...,to ensure Museveni rules for life?

Will tribal leaders, when Museveni will be no more, form independent tribal states?

Museveni, like all dictators, will live +90 years!
Report to administrator