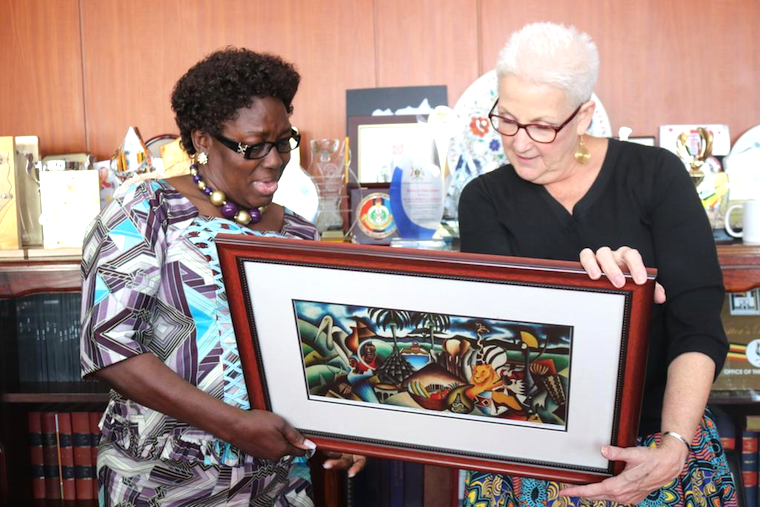 The tenure of the United States of America (USA) ambassador to Uganda, Deborah Ruth Malac has come to an end. News of Malac forthcoming departure came to the fore when she visited the speaker of parliament, Rebecca Kadaga on Thursday where they held a closed-door meeting.

A tweet from parliament of Uganda indicates that Kadaga wished Malac well as she reached the evening of her service as American ambassador to Uganda and gifted her with a locally made painting. URN has however learnt from diplomatic sources that Malac had long announced her exit as the US ambassador to Uganda.

“What we know is that she has done her years as Ugandan ambassador and it was announced earlier but she is expected to leave in February next year,” a source told URN. Natalie E. Brown also a career member of the Senior Foreign Service is tipped to replace Malac, according to a source at the embassy. Natalie currently serves as the chief of mission of the USA to Eritrea.

The source said that Malac’s departure hasn’t been publicized yet because she is waiting for her replacement. Sources also say Malac personally told high-level meetings that she would be leaving as US ambassador but may return in a different capacity.

Malac has had an outstanding role in Uganda, specifically advocating for freedom of speech, democracy and respect of human rights among others. Malac’s major task as she came to Uganda was to help Uganda avoid complacency in regards to HIV/Aids after the progress made and also ensure that Uganda enforces tenuous peace agreements in war-torn South Sudan.

While being vetted for the posting to Uganda by the senate foreign relations committee, Malac told the committee that if she was confirmed, she will urge the Ugandan president to ensure the political space necessary for a spirited and robust campaign in which all parties participate fairly as the country was heading to elections.

In April 2016 while speaking at the post-election symposium on Youth, Democracy and Governance at Hotel Africana in Kampala, Malac called on the Ugandan government not to sacrifice the rights of its citizens in the name of maintaining stability.

"These rights are guaranteed in Uganda's laws and constitution and shouldn't be sacrificed in the name of stability," Malac said.

She also said the US cannot ignore actions that shrink Uganda's political space and restrict freedoms of assembly and expression. While speaking in July 2017 at America's 241st Independence anniversary celebrations at the US Embassy in Kampala, Malac said that strong institutions, not one person or party, is the secret to longevity and stability of nations.

She noted that true democracy requires the collection of all voices, backgrounds and beliefs and a system in which, every individual can and does have a say in how the government is run. Just in September, Malac was recognized for her work in Uganda and received an award for her effort in the fight against the Ebola virus.

She has also been a strong advocate for better health for Ugandans and at the center of the President's Emergency Plan for AIDS Relief (PEPFAR), which is a US government response to the global HIV/Aids epidemic. Malac is a career member of the senior foreign service of the US and has served since 1981.

Before coming to Uganda, she was the US ambassador to Liberia, deputy chief of mission at the US Embassy in Addis Ababa, Ethiopia and also worked as director of the Office of East African Affairs in Washington among others.

Malac was nominated by USA President Barac Obama on September 19, 2015 replacing ambassador Scott Delisi who had announced his retirement. The US senate confirmed Malac’s nomination in November 2015. Malac presented her credentials to President Museveni February 27, 2016.

Unfortunately the anti-Trump elements in the US congress have stalled most of his appointees. That is why Trump has no clear-cut policies on Africa and other countries.

Hope a new ambassador will work towards a new leadership and human rights in Uganda. Malac has been compromised by the corrupt regime and has not been vocal enough. .
Report to administrator
+1 #2 Marvin ya kuku 2019-11-18 01:54
Quoting Lysol:

Trump has yet to appoint a new ambassador to those so-called "sithole" countries. Malac was appointed by Obama.

Unfortunately the anti-Trump elements in the US congress have stalled most of his appointees. That is why Trump has no clear-cut policies on Africa and other countries.

Hope a new ambassador will work towards a new leadership and human rights in Uganda. Malac has been compromised by the corrupt regime and has not been vocal enough. .

Can you name the ambassadors to Africa that so called anti-Trump elements in congress blocked?

And what was unfortunate about this blockage considering you clearly state Trump has no clear policy in Africa?
Report to administrator
0 #3 rubangakene 2019-11-18 18:45
("......but may return in a different capacity")!
What capacity indeed? So these people come here to look for other opportunities during their tenure and grasp it; how many diplomats have come back as business people, eh, after identifying "loopholes and weaknesses in our systems and the so-called low lying fruits ready to be picked?

What does that tell you where their hearts lead them? Uganda, oh Uganda!
Report to administrator