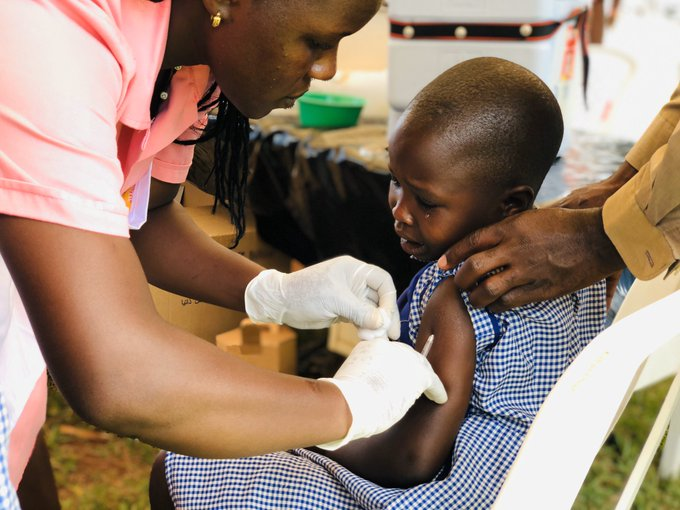 The ministry of Health has come under intense pressure over the sudden death of a child and the hospitalization of his two siblings following the recent national Measles-Rubella and Polio immunisation campaign.
Minister of Health Jane Ruth Aceng says they are investigating the three cases of adverse immunisation reactions but findings so far do not relate the cases to vaccination. The cases, all from the same family, were immunized at a community vaccination post located in Kalagi in Mukono district.

One of the immunised child passed away on Thursday at the pediatric unit in Mulago national referral hospital after being diagnosed with Stevenson Johnson Syndrome, a severe skin and mucus membrane disorder that normally occurs as a reaction to medication or an infection.

The deceased and his siblings were hospitalized at Mulago after they presented symptoms of a skin rash around the head area and red eyes. The skin rash later spread to the back and other parts of the body.

Aceng says that they have sent samples of the three children to the Uganda Virus Research Institute (UVRI) and the Center for Disease Control (CDC) to ascertain the cause of the reactions in the children.

"The children we have admitted belong to one family. There is only one family and it is from that one family that we lost a child and the other two children are there. Why is it not affecting the other families? We need to answer that question and it can only be answered when we investigate and find out the cause and that is what the doctors are doing right now. And so far, what they have told us from what they have seen, it's not related to the vaccination so far. But as I mentioned before, we’re taking the samples to UVRI, to CDC and we shall get to the actual cause." she said.

Aceng says such reactions to immunisation like rashes, swelling at the point of injecting, headache and fever are medically expected after but do not affect everybody.

"During immunisation, a number of reactions are expected. But none of these should last for a long time. And that is why we have dismissed other reports and are focusing on the three cases that have lasted for a long time," Aceng said.

She says that a total of 90 reports were received from parents and health workers in the aftermath of the immunisation campaign held last month, but most of them have been dismissed.

"Through pharmacovigilance, we received a total of 90 reports of advanced events following immunisation from the districts. Majority of the cases - 77 were minor including pain on the injection side, mild fever, plus or minus a mild skin rash which is expected. 13 of the cases needed investigation while 10 out of the cases were social media reports and could not be verified and thus not investigated. Therefore, our investigations so far have ruled out death attributable to the issue of vaccines." Aceng added.

Dr Alfred Driwale, the programme manager of the Uganda National Expanded Programme on Immunization (UNEPI) says that it is impossible that the MR vaccine was the cause of the adverse reaction in the children or the death of the reported case.

"Each vial has 10 doses. The same vaccine that vaccinated the three was used on seven other children at the same vaccination post, yet we have not received any other complaints of adverse reactions like those of the three children. At this point we suspect something else led to the reactions and not the vaccine," Dr Driwale said.

Similarly, Dr Deogratius Munube, the president of the Pediatric Association of Uganda says that anything could have caused the adverse reactions in the deceased boy and the Measles/Rubella vaccine should not be looked at the major cause.

"The Stevenson Johnson Syndrome is a disease condition which occurs sometimes without a known cause. We have some drugs that we know can cause it but it is one of those conditions where the body’s immunity actually is working much more than usual." he said.

Adding: "So you get a small blister and this blister multiplies so fast all over the body affecting what we call the mucus membranes, the eyes, the mouths, the rectum - all the places where it can be seen. It is one of those rare conditions that we see and I can tell you I can see one in a year…We usually try to find out what the cause is. Is it an infection, is it a drug? We have taken off blood samples to actually verify whether the child had measles."

Dr Yonas T Woldermariam, a representative of the World Health Organisation (WHO) says that the vaccines used were safe and were not the cause of death as posted on many social media sites.

"Before a vaccine can be rolled out, we carry a number of tests to determine its efficacy and suitability to the general public. We have a data bank where we store all complaints made against vaccines or medications passed so that we can follow up. And these three cases will be going there," Dr Woldermariam says.

According to the ministry, over 19.4 million children aged 15 and below were immunized in the campaign which was rolled out countrywide between October 16 and October 22, 2019.

As a result of this mass immunization campaign, the statement from ministry of Health says most isolation wards have since returned to their Measles-free status, with the reduction reports as high as 71 per cent. In the week of 4th to 10th November, only 212 suspected Measles and Rubella cases were reported following the vaccination campaign compared to 733 during the week of 1st to 7th April 2019.

The MOH should now run another campaign following all the children who were immunised to see where they will be in 2-3 years time, noting such issues as gut disbiosis, Mitochondrial disfunction, neuro-damage, allergies, ear-nose and throat problems, ASD, thyroid disfunction and general autoimmune diseases.

Reacting to only immediate reports is good but it doesn't mean the immunisation campaign was safe and therefore a success. Many reactions only surface with the progression of time.
Report to administrator
0 #2 WADADA rogers 2019-11-16 23:07
I warned in these pages that the white man behind the mass immunization did not have as much love for us as he wanted us to believe, man criticized me, now the results are seen, thee is always a sinister motive behind the funding
Report to administrator
0 #3 Amooti Mugi 2019-11-17 12:34
Than run to give hypotheses, Ms Acheng should shut up and wait for an authentic report from the CDC, and -hopefully- UVRI...!!

It is the test results that she should tell Ugandans and not punickingly being defensive !!!

Sadly Africans love to blame whites, but Africans are to a very large extent responsible for their predicarment !!!!!!
Report to administrator
0 #4 rubangakene 2019-11-18 18:55
Sad and unfortunate for the family; you see beggars can't really choose, can we? We accept these medicines without prior 'studies' and scrutiny.

Do we have a Medical Testing, Regulation and Control Department in the ministry or in Mulago or Makerere University to undertake those studies before clearance and acceptance into public use? Yet we hear that we are building cars and trying to build nuclear plants.
Report to administrator