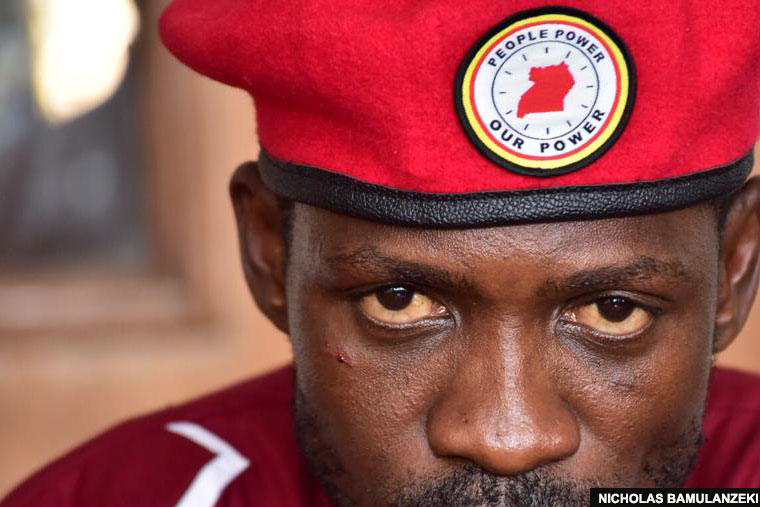 On August 13, 2018, Robert Kyagulanyi aka Bobi Wine was in campaign mode.

The popular musician-turned-parliamentarian was attending a rally for Kassiano Wadri for the Arua by-election in northen Uganda.

“The marks on my back, ankles, elbows, legs and head are still visible. I continued to groan in pain and the last I heard was someone hit me at the back of the head with an object — I think a gun butt or something,” Bobi wrote. “That was the last time I knew what was going on.”

Bobi's driver, Yasin Kawuma, was fatally shot dead during the violence that day. Bobi, a vocal critic of President Yoweri Museveni, is certain security forces knew where he’d be and meticulously planned their attack.

Reporting by The Wall Street Journal this summer confirms his claims and shows that Ugandan intelligence officials, with the help of employees of Chinese tech giant Huawei, hacked into Bobi’s WhatsApp and Skype accounts to monitor the dissident and his supporters.

“What I’ve been doing to protect myself and the people that I communicate with is, one, to use coded language when I’m talking on the phone that is known,” he told VOA.

“I’ve been forced to devise means of changing telephone numbers and telephone headsets constantly to keep them on the wrong track,” Bobi added.

“And sometimes, when I have to move to a place and I don’t want to be followed by the regime, I’m forced to leave my phone behind or put my phone in a car that is going in a different region of the country while I’m going into another one. That alone is how I’m trying to maneuver to go around it.”

Huawei, who helped build a large portion of Africa’s cellular backbone, has also been implicated in allegations of spying on African diplomacy on behalf of the Chinese government.

But Ren Zhengfei, the founder of Huawei, firmly denies spying claims and says his company refuses to give up confidential information of clients and “would definitely say ‘no’ to such a request,” in a rare press conference at the company’s headquarters in January.

In a recent interview with VOA, Zambian President Edgar Lungu also addressed the question of spying on dissidents and opposition parties in the country.

“There was this story that Huawei, the Chinese company, that I am spying on opposition party leaders, their phones and so on,” he said, describing what he thinks is a spread of misinformation.

He further explained that these claims are detrimental to the country’s image and foreign policy.

“I think that we need to do more … so that the truth is given to the people, so that we are not demonized over fake news stories,” he said.

‘They were tracking me’

Bobi says his first-hand experiences reveal the scope and sophistication of government-backed spying.

“Among the things I got to learn was that they were listening to my calls and having a copy of all that was WhatsApp chats and many other things, following my location every time,” he said.

“I even learned that day when I was arrested and brutalized in Arua, it was because of that technology that they got that they could listen to my phones, and they were tracking me. And they know that they follow me on my phone and they know where I am and listening to my calls.”

The government’s paranoia won’t stop, Bobi suggested, as long as they perceive him as a threat. And he has no plans to back down. Wadri, the candidate Wine campaigned for in 2018, won his seat in parliament.

Now Bobi is gearing up for a new kind of campaigning, after announcing this summer his intention to run for president in Uganda’s 2021 polls.

I am disappointed in you the Observer!
How can you use VOA as a news source?

The vidictive M7'Ss regime will always keep on trying. Always watch your back when dealing with the coward and corrupt Museveni.
Report to administrator
-3 #4 Wainaichi 2019-11-16 23:45
Good to hear US trained spy and pig Bobi Dingo dog how he is sabotaging Uganda and cheating Uganda security which is protecting Uganda against foreign spies as Bobi Dingo Dog.

And he want to rule the country with Kixza Ezza who is another suckling piglet.Hahahahehehe
Report to administrator
+4 #5 Lakwena 2019-11-17 16:47
But Peter Clottey, Hon Kyagulanyi is not a dissident.

In other words, how can an active opposition MP be a dissident?

How a 75 year old man with one foot in the grave, can viciously go after a young man BW, even younger than his own son, Gen Muhoozi is bewildering.

Full of himself, it never crosses Mr. M7's mind that Yasin Kawuma and one of all the young men, whom he orders to be tortured, held in incommunicado and/or shot is his son Muhoozi.Kainerogaba.
Report to administrator
+1 #6 Ocen J 2019-11-19 09:16
"Good to hear US trained spy and pig Bobi Dingo dog how he is sabotaging Uganda and cheating Uganda security which is protecting Uganda against foreign spies as Bobi Dingo Dog.

And he want to rule the country with Kixza Ezza who is another suckling piglet.Hahahahehehe"- Wainaichi

I don't see any reason any sensible government would employ such people, the so called Wainaichi !!!!

Am not surprised!!! BUT remember, everything that has a beginning also has an end!!!
Report to administrator