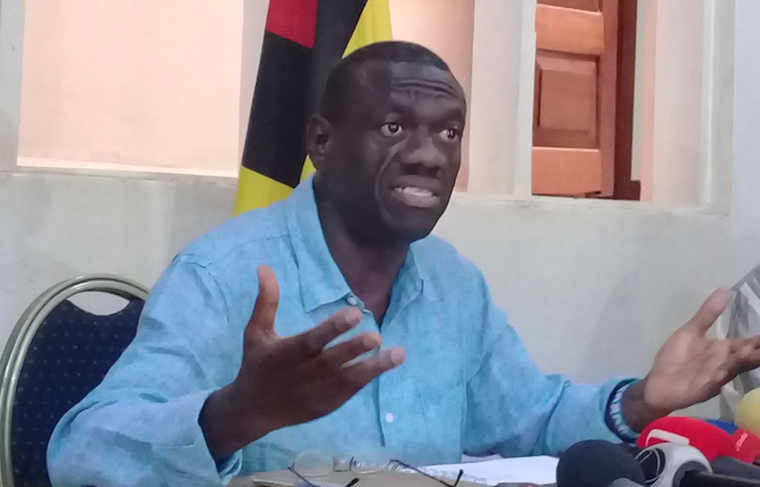 A day after police unleashed extreme brutality against Rtd Col Dr Kiiza Besigye, he has vowed not to give up on the struggle to liberate Uganda.

Addressing journalists at his Katonga based offices on Tuesday; Besigye recounted how he was saved by people in his car from falling down after police sprayed a highly pressurised water cannon directly at him as he waved to supporters from the open roof of his vehicle in Kireka in Wakiso district on Monday.

The brutality meted out on Besigye has received worldwide condemnation from within Ugandan and across the borders in Kenya, Tanzania and South Africa with many labeling the Uganda Police Force as barbaric, archaic bent on using colonial tactics to suppress democracy in Uganda.

Besigye had gone to Mandela national stadium where his Forum for Democratic Change (FDC) party members had converged for a conference. But police blocked the conference and declared it illegal which angered the FDC supporters who decided to march to their party headquarters in Najjanankumbi along Entebbe road.

But as has become their standard operations norm, police responded with highhandedness when they flashed the water cannon directly at Besigye. They later smashed the windscreen of his vehicle using a gun and pepper-sprayed him to force him out of the vehicle.

The four-time presidential candidate said he and other forces of change will continue to fight fearlessly no matter what the government does to them. Besigye said those who will survive the brutality of the incumbent regime will live to see the fruits of their struggle while others will be remembered for their contribution to the liberation.

Besigye had just returned from abroad when he was invited to attend the FDC seminar at Namboole. He was brutally arrested and taken to Naggalama police cells and freed in the wee hours of Tuesday morning. Besigye says such attacks against opposition leaders are meant to intimidate Ugandans.

He also said the propagandists have attempted to paint him wrongly as power-hungry; only interested in the presidency of Uganda. Besigye said he's not interested in the topmost chair, and in any case, he can move and settle in any country on this planet but he would never have the same citizenship rights that he has if he remains in Uganda.

For long, Besigye has been accused by some elements in the opposition and the regime sometimes as a 'selfish' politician who wants to remain the only face of the opposition in Uganda despite failing to dislodge Museveni out of power in four presidential election attempts usually marred by irregularities. Others have even labeled him as a Museveni 'mole' intended to legitimise the regime's leadership and ward off any other emerging opposition forces.

But Besigye said, he like most other Ugandans, are under captivity and they cannot forsake the role to liberate themselves. He said for Ugandans to break out of the captivity they are currently immersed in, they need to be made aware of the situation they are in such that they understand the cause of their suffering. Some people have labeled the struggle a failure already because it has not taken Museveni out of power but Besigye said the 'action part' takes the least time of any struggle.

"Action does not take a lot and not just in politics, in all struggles action is precept. We spent years in Luweero in the war of the bush, we spent there many years and I can tell you the time for action was actually very little. And people would say what they are doing now…if you listen to the bragging of those who were in government then, it is not different from the bragging that I seed now." he added.

Wake up from this deep slumber, fellow Ugandans. What more do we really want if not liberating ourselves and our only God-given country. Where else shall we go and settle? Are we ready to follow Rtd Col Dr Kiiza Besigye in the struggle or not?
MUK students have shown the way foward!

Zaitun, I love you!

What Ugandans will put in place as governance after Museveni is out, will be in peace as no tribe, no region is fighting another, but we are peaceful tribalists with a migrant as chief tribal leader!

Why keep Museveni in power when we can be FREE to do as we wish & won't have to fight one another to ensure migrant Museveni stays on?

the greatest mistake we make is to individualize the struggle to break free from captivity!

We call it Besigye struggle and further say that he has run 4 times. We even go further and say, Besigye doesn't like Kyagulanyi.

M7 has us where he needs us, and that to fight among ourselves.

Each time we go for any elections it means that there is democracy in Uganda! We need to draw the line and say, M7, his family/relatives must go. Period.

Ugandans have no right to go for more fake presidential/parliamentary elections, especially as the tribalsitic system disqualifies Uganda as a country!

Fake elections, fake country, fake democracy & Ugandans are locked with Museveni for life in the tribalistic system that protects him!
Report to administrator
0 #13 Akot 2019-11-08 22:02
sula, agreed, but,

Only a UNITED people face to colonialism, can make their stand.

Ugandans are used by Museveni;

- tribal leaders ensure the divisive system,
- police ensure no gathering, no opposition,
- Ugandans are alright with the tribalistic system...

So, how on eath will Museveni be dislodged & by which people?

It will be that just ONE opposition leader calling tribal leaders to stand down & UNITY of Ugandans, who will ensure Museveni is OUT & give chance to a start!

But, do Ugandans want Museveni out?
Report to administrator
+3 #14 naboma 2019-11-09 08:21
Leadership takes and requires sacrifice-DR Besigye has demonstrated that beyond any measure and will not be compared with any ugandan.

He does it with passion and determination, like no other and the saboteurs label him a mole my foot.

Leadership takes and requires sacrifice-DR Besigye has demonstrated that beyond any measure and will not be compared with any ugandan.

He does it with passion and determination, like no other and the saboteurs label him a mole my foot.

Tell me what will anyone else do that KB has not done to liberate us -may be taking up arms!

Nabom, where have you been?

It is heart wrenching the way Dr. Besigye has been brutalized since 2001 and the same time accused of being Mr. M7's mole. In 2005 he was maliciously charged with treason, terrorism and above all rape.

Many who have done nothing or very little are now very angry demonize and resent him for not having defeated Mr. M7 in all the rigged elections.
Report to administrator
0 #16 Lakwena 2019-11-11 11:33
After being thrashed and brutalized, and should he complains, they accuse him of being an angry man. E.g., if he were not a strong man, the water canon blast directed at Dr. Besigye last week could have broken his spine or jolted his brain and killed him instantly.

If he had not supported himself, he could have as well fallen headlong in front o the vehicle and broken his neck. Istead of sympathy he is instead laughed at and rebuked.

In other word can Ugandans ever imagine all these inhuman treatments were directed at Mr. M7 or Janet Kataha? Mr. M7 these days talk about an eye for an eye; should Dr. Besigye consider paying Mr. M7 in the same currency?
Report to administrator
12