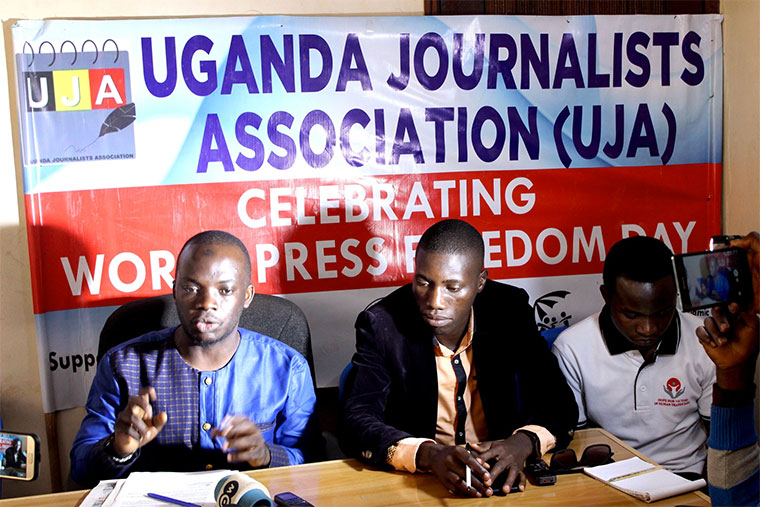 The peaceful strike that started on Tuesday last week turned violent when the army responded with highhandedness, brutalising several students including raiding students halls of residence and hostels outside the university at night. Journalists were not spared the barbaric brutality either with the university declaring the university a no go area by the university management.

Just yesterday, at least three journalists; Alex Esagala, a photojournalist with Daily Monitor, Geoffrey Twesigye, a photographer with NTV Uganda and Lawrence Kitata of Vision Group were hit with teargas canisters. Esagala and Twesigye are still nursing wounds and still in the hospital - with the police justifying the attacks, saying the journalists were to blame for siding with the striking students. Earlier last week, Chris Ssemakula from BBS TV, Canary Mugume of NBS TV and Davidson Ndyabahika Uganda Radio Network were also attacked.

UJA president Bashir Kazibwe says the brutality meted out on journalists seems to be well orchestrated by security agencies and to date, the authorities have remained silent. Kazibwe said no single security personnel has been paraded, highlighted and or shown to the public especially those ones involved in orchestrating violation of rights of journalists in the country.

"We are just messengers and we don't know why police are turning against our members whose only crime is carrying a pen, notebooks, cameras. We were not protesting or anything during the Makerere University saga," he said.

"We cannot continue giving them publicity when they are at the helm of brutalizing, beating, maiming and nearly killing members of journalists. We're sending this message humbly & resolutely to our dear media houses, our employers please be part of us in this struggle. We cannot work productively when we are lame and or hospitalised. This is a struggle geared towards protecting the rights of media practitioners in Uganda." he added.

Kazibwe added that the media blackout will also be followed with a procession protest to police headquarters and parliament on Monday next week to petition the two bodies. Today journalists walked out on deputy police spokesperson Polly Namaye during a press conference by Uganda National Examination Board (Uneb) on Primary Leaving Education (PLE) exams. As soon as she started making her speech the journalists walked out leaving her just the Uneb photographer and two New Vision journalists.

Kazibwe said as journalists they are equally shocked at the anti-media stance of Makerere University under the leadership of Prof Barnabas Nawangwe.

"We are aware of a plan from the university leadership to met out violence to the media. As for Prof Nawangwe, we won't say that he is anti-media be he has a lot to hide that he doesn't want to go to the public. It is on record that severally Prof Nawangwe has been threatening violence against journalists himself - meeting them in corridors at the university and sending them threatening messages This leaves a lot to be desired." he said.

"When you tell journalists why don't you leave my university, we are tempted not to believe that it is a personal thing that he is trying to protect. It shocks especially coming out of a manager of an institution that trained many of us...This is not the university that journalists went through. What is happening courtesy of the leadership at the university related to the Office of the vice-chancellor in his bit to keep some stuff under the carpet." he added.

When asked Whether He was Bound to Stop Fighting during the Talks..33 Years Later..After becoming God of Uganda The Poor Guys are facing the Fire..One Police Cadre attached to Old Kampala station one Baguma Broke the Back of a Photo Journalist..as usual being a Blue-eyed Fellow..of the Dynasty..He was not Procetued..The Former IGP of Police is Enjoying his Life after killing Innocent Muslim Clerics..Ugandans have to wake Up and Demand their Constitutional Rights..If at all they have them..
Report to administrator
+2 #2 Kirya 2019-11-01 21:03
I hear voices that say we have security. Fools you pay for it but you have demand better security. m7 is scared of people uprising.

He holds on to power by intimidating, killing, using safe houses to torture those who dare raise their voices.

34 years wasted as Uganda is back to 1930. The bushmen have grabbed and own Uganda riches. Ruling by the power of the gun. NRM is a terrorist outfit

I support all means to take the thugs out of power.
m7 is no different from the gang members of California.

Ugandan you have the power to make a change.
Report to administrator
0 #3 Lakwena 2019-11-04 14:20
In other words, the journalists/ media houses are in a catch 22 dilemma: if the don't they are damned. If they do they are equally damned.

If they boycott covering police/military activities, it is like giving Mr. M7 and gun a blank check to brutalize Ugandans.

If they cover the brutality they are also brutalized. That is how evil rules.
Report to administrator