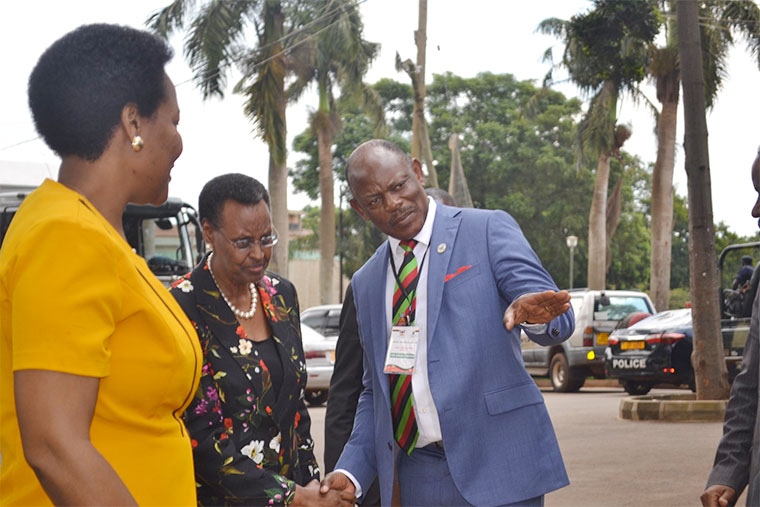 A section of members of parliament has demanded the immediate resignation of Makerere University vice chancellor Prof Barnabas Nawangwe following a 3-day student strike and subsequent brutal arrest of students by the military.

On Wednesday and Thursday nights, armed military officers stormed student halls including Lumumba hall, one of the largest male students’ residences in Makerere University and reportedly broke into more than 60 rooms, smashed students’ properties and forced them to seek refuge outside the university.

The raid on the halls came after students protested against a new 15 per cent tuition increment. From next academic year according to the new fees policy, all undergraduate course fees will be increased by a cumulative 15 per cent every year for the next five years. The legislators say that the developments at Makerere are an indictment on the leadership of Nawangwe.

“The cry of the students on the cumulative increment of school fees is a real cry. It reflects what is happening in Uganda. The students are simply trying to express the poverty situation they live in because they know it is a reality, they will not be able to afford this tuition,” Acidri said.

Acidri said that everybody in Uganda has a right to quality education and if the university administration brings a policy that is exclusive and resisted but forces its way through the army, then it is an indictment to the institution’s leadership.

"I personally think that the vice chancellor is not qualified to lead Makerere. He will do a better job in leading an institution like Kyankwanzi because you cannot intimidate intellectuals and you believe you will succeed. Makerere is a very old institution that will outlive all those individuals who are bent on trying to destroy it. I can assure all of them that they will eventually go away and Makerere will continue to prosper." said Acidri.

"The brutality at Makerere is something that I thought ended during the days of Gen Idi Amin. But if it has been brought deliberately to intimidate young people who are actively seeking for change not only in the management of Makerere but also in the entire management of Uganda, those who have crafted that plan are bound to fail." he added.

Karuhanga described the events at Makerere as exceedingly disturbing and embarrassing to the government. He wondered why the government responded with military force against students protesting with only placards.

“Students have a disagreement over tuition increment, they come out with placards. The best you can do as a government is not to come with military men, with tanks, brutalize, torture, treat them in the most inhumane and degrading manner,” Karuhanga said.

He cautioned the government against torturing, threatening and abusing the rights of Ugandans.

"It was last seen during Idi Amin’s time where they picked students from their halls of residence and crashed their doors, crashed their materials but also went for the same students; breaking their legs, torturing them, some even raped, some pierced with knives…The total silence of all government actors, if you realise, the torture is going on, the unbelievable sins are prevalent but there is complete silence from government and different sectors that would ordinarily you would think would come out quickly come out and say; we’re going to engage students, we’re going to engage the university administration on this. Zero! Meaning that the course of engagement has largely been done away with." said Karuhanga.

Bukoto East MP Florence Namayanja said that the violation of students rights especially the attack on female students was an attack on all women in the country that cannot go unnoticed and with no explanation.

"I have been in Washington, and I witnessed demonstrations every day at the White House and the demonstrators were being protected by police. What happened to Uganda where they cannot allow freedom of expression? This is a concern for all us." she said.

"Then you see, I would call him an insane president, because you cannot be sane and you order your army men to go and start brutalising children who are telling you; our father we don’t have this. He doesn’t care because he is using the young people in the name of Bazukulu [grand children]. No Muzukulu [grand child] of his is in Makerere. We know that where he took his children, he paid because he was able to. Makerere University everybody is running to it because it is literally a university for peasants." he said.

"Then you bring the army at night moreover. What are you doing with our children at night? Girls hounding them out of their halls of residence, hostels you’re breaking. What is this in this country, breaking locked doors to pull out children. The things you find in…you dismantle. What is in the head of these UPDF officers?"

Since last year, the army has been permanently deployed allover Makerere at the invitation of Nawangwe.

Ssebaggala said that the greatest enemies of Uganda are the people who brutalize others which he described as a great crime against humanity. He and his colleagues have given government up to Sunday for the army to vacate university premises and have all arrested students released. Yesterday police released at least 47 students that had been arrested following a court order that said they had to be released unconditionally.

"We have the Prevention and Prohibition of Torture Act but when you look at the pictures, when you look at what happened at Makerere University leaves a lot to be desired. In fact, it reminds of what happened in Kasese when the same government, same soldiers attacked the Mumbere palace and killed a lot of people. We cannot sit back as representatives of the people when there is a lot of human rights abuses going on."

Mwiru said that they had been allocated space on the order paper for the entire parliament to debate the situation at Makerere on Wednesday next week.

That semi-illiterate/ babysitter/kindergarten teacher running the ministry of education should also go with him.
Report to administrator
+3 #3 Lakwena 2019-10-28 09:32
As usual, Ugandans are sitting on their hands as their children are brutalized in broad-day-light and in the dark; by the very soldiers, whom they pay salaries, dress, house, transport and provide free medical services for their wives and children.

In other words, adult Ugandans and their children are Mr. M7's slaves and he uses the UPDF soldiers (Ugandans sons) are his taskmasters.

Slaves because, if someone abuses and uses your own money (taxes) to brutalize you and you can't do anything about it: you are his slave. Besides, slaves and their children (generation) have no future.

E.g. after graduating from the university where they were tortured and brutalized, can the sons/daughters of slaves be employed by their slave masters? NYET.

In other words, you can't brutalize the children of someone you love. Especially if that someone breaks his/her back to pick and pays your bill for food, shelter, clothing, transport medical and utility.

In other words, are Ugandans bewitched? YES.

Because, Mr. M7 already told and mocked us plain blank before the whole world that: he is in our State House fighting us, using our own sons and daughters for purposes his unearned prestige and family members only.

But in the current Uganda under Mr. M7, non of the above is possible and working.

In other words, at this rate where the constitution serves and amended to protect only rights of one man. Mr. M7 and his immediate family members the Ugandans are at the mercy of criminals and Mr. M7/NRM government.
Report to administrator
0 #6 Jb 2019-10-30 00:24
The MPs should kindly note that the university policies are implemented by the university council and this was upon recommendation by the former students guild.

As a student at the university i am suddened by the brutal response of the government but also we need to appreciate the fact that the university is doing a good jovto provide the best services in Africa however this won't be achieved without the sufficient funds.

The university last revised the tution policy 13 years ago and if you are to consider all factors in play including inflation and others, increasing the tuition by a given margin which has been suggested by the students themselves is not that bad afterall.
Report to administrator