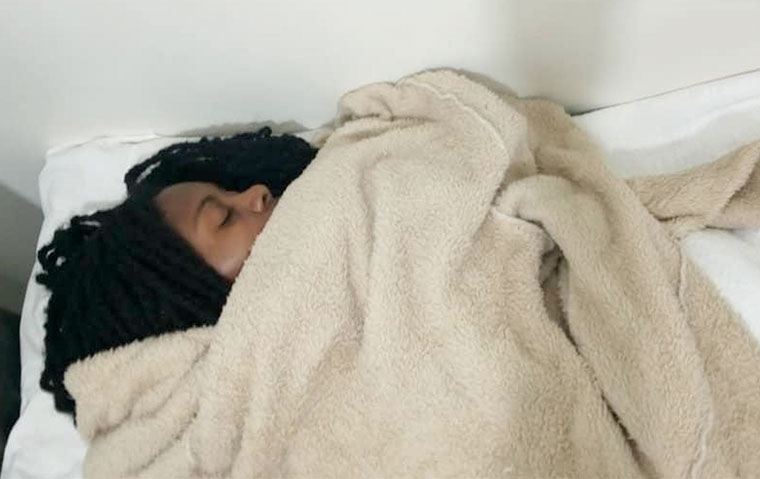 A Makerere University student, Siperia Mollie Saasiraabo who led a peaceful protest against fees increment has been admitted in Mengo hospital following an attack by unknown people.

Saasiraabo who is also the guild representative councillor for the School of Psychology was attacked on Wednesday night near Complex Hall. The student leader was together with other 14 female students handed letters of suspension from the university for allegedly inciting violence by Prof Eria Hisali, the principal College of Business and Management Sciences and Gordon Murangira, the personal assistant to the vice chancellor.

The students had participated in a protest against the 15 per cent cumulative tuition increment, which is being implemented as part of a policy, passed by the University Council in June 2018.

Annah Ashaba, Saasiraabo’s close friend and neighbour at the Kikoni based Makerere International Students Hostel (MISH) said she managed to rush the student to the clinic at around 9:40 pm.

“I went to take a shower at the hostel, leaving my roommate there. And on returning, a gentleman Joel, our classmate was standing by the door of my room. I asked him what the matter was and he pointed to Mollie who was lying unconscious on the carpet in the room,” Ashaba says.

Marion Kirabo, the friend says that she doesn’t know who could be behind the attack.

Saasiraabo was first admitted at the International Medical Centre (IMC) in Wandegeya before she was referred to Mengo hospital. According to Kirabo doctors at IMC said Saasiraabo was suffering from trauma.

Before the incident, students had been engaged with security agencies in running battles as they called for the cancellation of the fees increment and reinstatement of their suspended colleagues. As a result, more than 100 students were arrested including the guild speaker Ezra Byakutangaza and the guild president Julius Kateregga.

“For two days, a group of Mak students has been leading mini demonstrations on campus, claiming they are protesting against non-existent fees increment. Apparently strategizing and positioning themselves for the next guild elections,” says Nawangwe.

But Kirabo accuses the university management of failing to listen to students pleas.

Military police & plain-clothed men breaking into Makerere Uni students’ halls, assaulting them & destroying their property.
For crying out loud, these upcoming leaders deserve respect & to be listened to.
Now who’s painting a bad image of this tyrannical regime?#EnemyOfProgress pic.twitter.com/fQlC0CiRRE

"We’re not hooligans because we have tried to engage with management for over one month and half. We have copies of letters that we have continuously written and nothing has been done. This was the last resort after months trying to get the university management to do something and listen to our cries. And they have refused to, they are being selfish, they are being inconsiderate. They are being unreasonable. They should sit down with students and listen to their cries because at the end of the day and educated population is better for the development of any country." she said.

Kirabo says while they were being detained at Wandegeya police station, they were served suspension letters from the university. More students have been arrested today evening in a military raid at Lumumba and Mary Stewart halls.

Straight from ivory tower ... i would like to spread the bad picture of @MakerereU the leading East African university ignoring student issues @Cambridge_Uni @campusbeeug @ntvuganda this is what happens in Makerere university in the dark when the media is no more.
Retweet pic.twitter.com/ypY84kUMMK

0 #1 MR 2019-10-25 05:03
Ms. Siperia should sue the university and it's V.C for failing in their responsibility to provide a safe learning and living space for its students on its campus grounds.