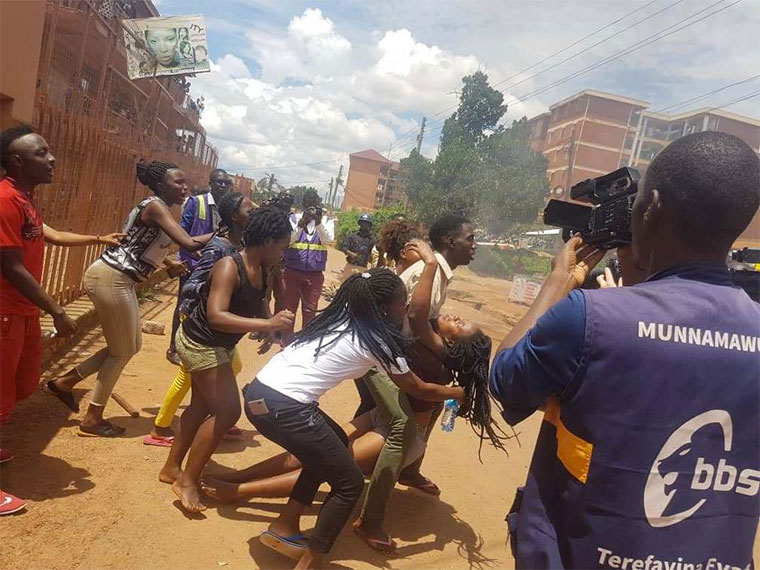 More than 100 students have been arrested during an ongoing strike at Makerere University. The students are protesting against a 15 per cent annual tuition increment, which is implemented as part of a policy which was passed by the University Council in June 2018.

The university campus, in the outskirts of Kampala, has been a hive of activity since last evening, as students engaged security agencies in running battles. Police used teargas and live bullets to pursue the rowdy students, who are calling for the cancellation of the fees increment policy. Security operatives reportedly stormed student rooms last night and arrested those suspected of inciting their colleagues to stage the strike.

Today's morning classes were disrupted by the strike as students chanting 'fees must fall' combed the lecture theatres across the university, forcing their colleagues to join the strike. Several heavily armed and manned police patrol cars have been ferrying arrested students from the university premises to the nearby Wandegeya police station. Among the arrested is the People Power leaning guild president, Julius Kateregga and Ezra Byakutangaza, the university's guild speaker, among several other student leaders.

Both Kateregga and Byakutangaza were arrested while leading a procession of students from Kikoni, a west of Makerere, in protest of the arrest of their other colleagues. Kateregga says that the students have given the university management their stand regarding the revocation of the 15 per cent tuition increment.

Byakutangaza says they cannot accept the university management to enforce a tuition policy on the students’ fraternity before they are fully in agreement with them. He adds that the students were ambushed by the policy, which was passed without 'meaningful' consultation.

The increment which took effect with the 2018/19 academic year for new students on all undergraduate programs, means that the university will be increasing tuition by 15 per cent per course every academic year.

"We cannot allow the university to deteriorate to this level. Yes, we were sold by our leaders before, but as leaders now, we’re standing up and saying students should be listened to and we’re not confronting anyone. And it is ok if everyone in the university is suspended but until the girl [Siperia Mollie Saasiraabo] who was suspended unlawfully is reinstated. It is her constitutional right to express herself. Am told that over 100 students have been arrested and are in different cells but I encourage students not to give up the fight." said Kateregga.

Siperia Mollie Saasiraabo, a guild representative councillor told URN that while at Wandegeya police last evening, they were handed letters of suspension from the university for allegedly inciting violence.

The suspension letters were reportedly delivered to the police station by Prof Eria Hisali, the principal college of Business and Management Sciences and Gordon Murangira, the personal assistant to the vice-chancellor Prof Barnabas Nawangwe.

About the same time last year, Makerere University suspended nine students for allegedly threatening to disrupt activities at the university over tuition increment. They were accused of circulating messages calling for defiance against the university management.

Several others received warning letters from the university management. The students were protesting the cumulative 15 per cent tuition increment, a policy passed by university council in June 2018. The policy came into force after a section of Makerere University student leaders recommended a for a 15 per cent tuition fees increment across all courses offered at the institution.

+3 #1 Lysol 2019-10-24 01:22
Students can always bring about change in the country, but these youngsters are not so well organized, like us back in the days of Amin.
Report to administrator
0 #2 kabayekka 2019-10-24 03:57
It is going to help this learning institution if independent accountants or a government auditor can come over and review the financial books of these learned peoples finances.

The Uganda military and police that run on classified budgets, cannot solve these problems.

This military must leave the hill of Makerere as they are only aggravating the issue.
Report to administrator
0 #3 MR 2019-10-24 04:15
Is it just me or does Makerere increase fees every year.

Can they learn to give heads up before increasing the fees on parents
Report to administrator
0 #4 kabayekka 2019-10-24 15:58
The students of this institution must understand that this increase in their fees has got to do with how the tax payer's money is being used properly (value for money).

This government has been found to have the financial habit of spending important funds anyhow and it is doubtful if this increase is going to be of any use to improve this college's infrastructure for some years to come.
Report to administrator
0 #5 Akot 2019-10-24 20:40
Lysol, thanks!

Even Amin didn't tribally divide & rule Ugandans, he just killed Acholi for being with Dr Obote!

Unless the system is brought down, there is no way Ugandans will force Museveni out as "the people of Uganda" don't exist any more!

Museveni will rule tribally divided Ugandans for life, then WHAT when the migrant will be no more?

It's as if Ugandans believe they/their tribal lands are there thanks to Museveni & will perish with him & they won't have to look at one another ever after!

Makerere University/all students can bringing Ugandans TOGETHER & this begins by saying NO to tribal leaders who lock up Ugandans with Museveni through the tribalistic system, even knowing no outsider will say a word against them & Museveni, as long as Ugandans go along!

Even Amin didn't tribally divide & rule Ugandans, he just killed Acholi for being with Dr Obote!

Why are Ugandans keeping Museveni in power?

Lamera Akot, no Ugandan is keeping Mr. M7 in power. The man is keeping himself in power at all cost, including massacring students.

Did M7 come to power thru popular votes? NO.

E.g., in the recent past there were several violent protest in France, did you see the French military police or Elite Force deployed to quell the protests NO.

In other words, instead of risking their lives to a man who has mastered the art of violence and killing (genocide); Ugandans are simply waiting for the man to drop dead.
Report to administrator