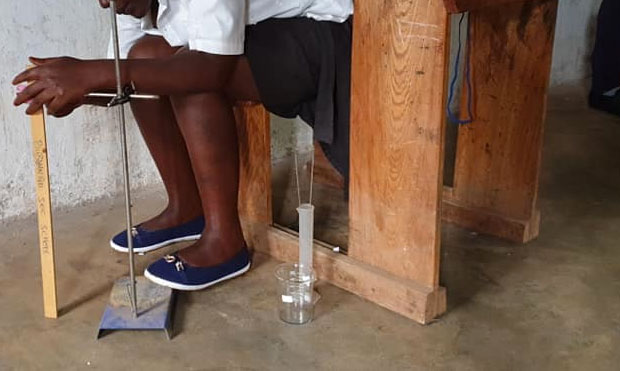 A S.4 candidate during UCE exams

Police in Kitgum district is investigating a senior four student of Kitgum Vision college for allegedly using her sister's name in the on-going Uganda Certificate of Education (UCE) examinations.

The Aswa River Region police spokesperson Jimmy Patrick Okema told URN in an interview today Wednesday that the 20-year-old student was found with different names on her answer booklet this morning while sitting for the mathematics paper one examination.

He says the student identified as Monica Akidi used a different name of her sister, Esther Ayaa on the examination answer booklet raising suspicion of malpractice and impersonation.

Okema notes that investigation is on-going to ascertain what could have caused the student to use different names on her examination answer booklet. A case of impersonation and exams malpractice has been registered at Kitgum central police station under SD REF 39/16/10/2019.

Christopher Opoka, the Uganda National Examination Board (Uneb) area supervisor for Kitgum and Lamwo districts confirmed the case. Opoka further revealed that the student also used three different index numbers on the answer sheet which were not hers.

He says the name and index numbers the student used were totally different from the details provided on her student’s identity card and attendance list. Opoka says the student will be allowed to continue with examination but notes further that investigations will be on-going between now and during the time for marking the scripts.

The school headteacher, the chief invigilator at the school, two invigilators and a chief scout monitoring examination at the centre have so far written their statements at Kitgum central police station.

Vision College Kitgum school officials have however recognized that the student had registered at the centre during preliminary investigation and has since the commencement of examination used her genuine names.

It has got nothing to do with the corrupt cops. Maybe they were not paid or bribed .

The Education Ministry is rotten because it's led by a former babysitter/kindergarten teacher with no valid/fake academic credentials. Ugandan's kind of Gucci Grace.(of Mugabe's Zimbabwe)
Report to administrator
0 #2 rubangakene 2019-10-17 22:01
What's is in a name,eh? So long as the invigilators can verify she is the same and only person doing the exams, there should be no problem. exam periods can be a very stressful time for youngsters; they must be afforded all the help and guidance to ensure a smooth ending; the police have better things to do.
Report to administrator