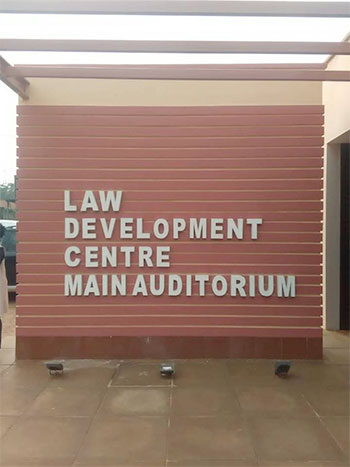 In the past, any student intending to become an advocate had to first sit a pre-entry examination in order to study the one-year diploma in Legal practice course at Law Development Centre (LDC).

But in August, the Law Council agreed to waive the exam for two years. The suspension came with mixed reactions, mainly on the quality of future advocates. However, LDC insists its firm teaching methods will maintain quality on top of managing the currently huge increment in student numbers, writes YUDAYA NANGONZI.

For the last eight years, the Law Council has conducted pre-entry examinations as a prerequisite to join LDC. Oftentimes, more than 1,500 students would apply but LDC would take up just half, locking out the failures.

But in recent years, the centre had considered starting an in-depth evaluation of the exam to assess whether it is serving its intended purpose of quality control at admission. According to Frank Nigel Othembi, the LDC director, this review was overtaken by events when parliament approved to scrap the exam.

He said focus has now shifted on devising best ways to deliver quality education and legal training for this very demanding course.

“With the suspension, I think it will be extremely difficult to bring pre-entry back after the two-year period. Our teaching methods and strict examinations remain unchanged, indicating that only those who meet our rigorous standards will be able to pass the Bar Course,” Othembi said.

The rigorous processes include examination questions bank and setting/marking exams by external legal professionals. While several law dons expressed concern over the big number of students enrolling after the suspension of exams, Othembi said there’s no need to worry about the quality of lawyers. This academic year 2019/2020, the admissions board considered at least 1,685 students for the Bar Course.

Of these, 1,125 students are on the Kampala campus and 560 on Mbarara campus located at what used to be Eden International School.

This lot comprises only fresh law graduates. For the next academic year 2020/2021, the board admitted 1,117 students who completed their Bachelor of Laws (LLB) in 2018 and previous years. This is the biggest number of students LDC has admitted in one academic year since inception in 1970.

In a bid to absorb the soaring numbers, LDC decided to decentralize its services by establishing constituent colleges in all
regions of the country. With Kampala and Mbarara campuses to date, LDC signed a Memorandum of Understanding (MoU) with Lira University after apportioning five acres of its land to aid LDC’s expansion of legal training.

According to Othembi, Lira campus had been approved for this year but the process delayed due to lack of funds.

“We expected Shs 6bn for that but unfortunately, the funds were taken out of our budget. We expect to open Lira next year [2020] and Mbale campus two years later,” Othembi said.

He added: “We do have a big funding challenge yet taking on about 1,000 students more than budgeted for in the financial year 2019/20. We have requested for a supplementary budget of about Shs 5bn which we expect to get.”

He hopes to bridge the funding gap for extra revenue which will be brought in by the additional students. By 2020, LDC believes it would have cleared the pre-entry backlog and not challenged with absorbing more successful students from accredited universities.

Currently, construction of a multi-story building is ongoing at the Kampala campus to accommodate the administration block and modern state-of-the-art library, among others to create teaching space.

Despite the massive increment in students, Othembi said the institution has managed to keep the firm (class) sizes reasonable from about 25 to 35 each. In total, the firms have been increased from 24 to 48. Of these, 32 firms are on Kampala and 16 at Mbarara campus.

In addition, lecturers have also increased from 80 to 100 to handle the increased workload while the department of Law has been cleared to recruit own 30 lecturers so that the 100 lecturers concentrate on the Bar Course.

The secretary LDC, Didas Bakunzi Mufasha, told The Observer that lecturers undergo annual pedagogical training with the last being held at Mbarara campus to ensure that teaching standards are maintained.

“There’s no cause for alarm on the issue of standards. We have highly qualified and well-motivated professional advisors to undertake this task and so far, we are running so well. The quality of legal training at LDC will not be compromised by expansion to other parts of the country and suspension of pre-entry,” Bakunzi said.

He cited Mbarara campus with a “serene environment” that was set up as a pilot project but has proved a success and giving the institution the impetus to open other campuses.

To ensure uniformity in teaching, Bakunzi said they will continue to rotate lecturers like on a weekly basis for students to feel they are going through similar hands at all campuses.

“At LDC, every subject is allocated a head and deputy head. We don’t want to say the head is on this campus and the deputy is on another because people will feel one campus is inferior/superior over the other,” he said.

Starting with bar course students on this academic year 2019/20, LDC will classify their diplomas like it does for other diplomas in Human Rights and Law. The classes of diploma are; Distinction (First Class), Merit (second upper), second lower and pass.

Othembi explained that the classification of diplomas will inspire hard work among students as well as guide employers to identify exceptional students.

“Back in our days, it was even worse; Our LDC transcripts even showed your position in class like 15 out of 57. Just imagine if we were to go back to that original system and indicate someone as 1,680 out of 1685! Of course, this is more embarrassing,” he said.

While LDC continues to implement a 90 per cent attendance requirement as a prerequisite for passing the bar course, a biometric system is being introduced to monitor attendance of students. The procurement process has commenced as installation of machinery is expected before end of 2019.

To students who intend to join LDC with hope that they are exempted from pre-entry, he had this to say.

“LDC is not parte after parte. Those who sow the seeds of hard work and commitment shall reap the rewards of academic and professional excellence.”

With new changes and more campuses, it is increasingly going to be difficult for one to know a campus on which they will study until the admission process is complete. According to Bakunzi, allocation of campuses is now done randomly by a computerized programme to avoid human hands that are susceptible to biases.

This is meant to avoid scenarios where students apply in big numbers to join one campus over the other.

“When we embarked on the decentralization process, people thought we are tribal yet we are working towards expanding legal training. For students, once you’re admitted on a campus, you have to stay there until you finish your course,” he said.

“We don’t want to entertain cases of people pleading that because they work in Kampala or Mbarara, they should be admitted there. By the time you agree to start LDC, we believe you have given it all your time and not distracted with your work,” Bakunzi said.

Meanwhile, the institution will on December 13, 2019 hold a graduation ceremony for students who passed outright at Mbarara and Kampala campuses for the academic year 2018/2019. This will be the second graduation in one year – the first of its kind at LDC.

Students’ examinations have been marked – thanks to the current retreat system where examiners converge and mark the scripts at ago. Bakunzi said it is unfair to keep such students waiting until next year “when everything is ready.”

Asked whether this will be a one-off event, Bakunzi said: “We expect this to continue because as soon as students complete, we don’t need to delay them for employment. For the future, it is being mooted that subsequently, each campus graduates its students.”

For now, the institution is preparing to celebrate 50 years of existence, starting January next year. LDC was established by the
LDC Act that was promulgated on August 21, 1970.

The 11-man steering committee led by lawyer Peters Kizito Musoke also a member of the LDC management committee will organise activities every month, until August.

“We shall publish a book, journal, and award best performing persons in the field of law and organise a sports gala to mark 50 years. LDC is no longer an infant organisation which calls for these festivities,” Bakunzi said.

Other committee members are deans of universities, law council and the Justice, Law and Order Sector (JLOS) secretariat.