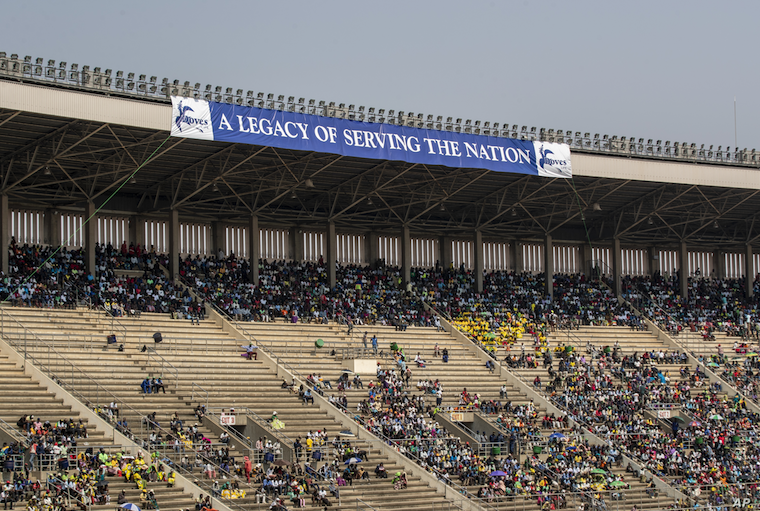 Members of the public sit in the stands during the state funeral for former president Robert Mugabe, at the National Sports Stadium, in the capital Harare, Zimbabwe

Military members stood rigid and proud. All of the pomp and circumstance one would expect at the memorial for a man hailed as an African icon was in place Saturday for the final public sendoff for Robert Mugabe.

But there was just one thing missing: A crowd. Because, for the man known as the father of his nation, very few of Mugabe’s 16 million "children" showed up for his final public sendoff Saturday at Harare’s National Sports Stadium.

The 60,000-capacity stadium was maybe one-third full. It was a poor showing compared to previous events, like the packed-to-the-rafters inauguration of the man who used the military to force Mugabe to resign two years ago. Mugabe, the first president of independent Zimbabwe, died last week at the age of 95, after ruling for 37 years.

In attendance were a smattering of African heads of state and former heads of state - but no major leaders from outside the continent. Those who came included leaders like Teodoro Obiang Nguema Mbasogo - who has ruled Equatorial Guinea with an iron fist since 1979 - and Kenyan President Uhuru Kenyatta, the son of independent Kenya’s first president. They praised Mugabe for fighting to liberate his country from the yoke of centuries of colonial rule.

But his own family described Mugabe, who was forced to resign in 2017, as a bitter man. His widow, Grace, draped head-to-toe in black lace, stood on the dais, her head down. The family’s spokesman, Walter Chidakwa, hailed the leader, but also offered some sharp words.

So where was everyone on this sunny Saturday? Many were in one of Harare’s hours-long petrol queues - a consequence of the shattered economy that many blame Mugabe for.

Teacher Betty Mukombani told VOA she had no interest in driving to the stadium to bid farewell. At the time, she was staring down a four-hour wait in a petrol queue just a five-minute drive from the stadium.

“He’s the one who ruined the economy of Zimbabwe, so I have no interest in burying such a criminal,” she said.

And others in the queue, like archeologist Happy Marufu, say they have real relatives they’d rather be with.

“I should be doing something else or sometimes even relaxing with my family,” he said.

Even those who turned out to see off the father of the nation couldn’t resist making a point about this country’s ruined economy. They sang, hundreds of them: Before, bread cost $1. Now, it costs $10.

A lesson to those who are still out there and clinging into power. Thinking that that they are invincible. Mobutu was buried standing up.

Not a favorite dictator as per Trump's words calling that new Egyptian leader. One wonders why M7 did not attend the funeral? Mugabe is being buried in a cheap coffin.
Report to administrator
0 #2 Wainanchi 2019-09-15 13:03
Good bye Comrade Mugabe! Your place is written in the history of small independent countries.

History can be rewritten but the truth not. Good bye Good and Freedom Loving and Fighting Warrior!!!Good Bye!!!
Report to administrator