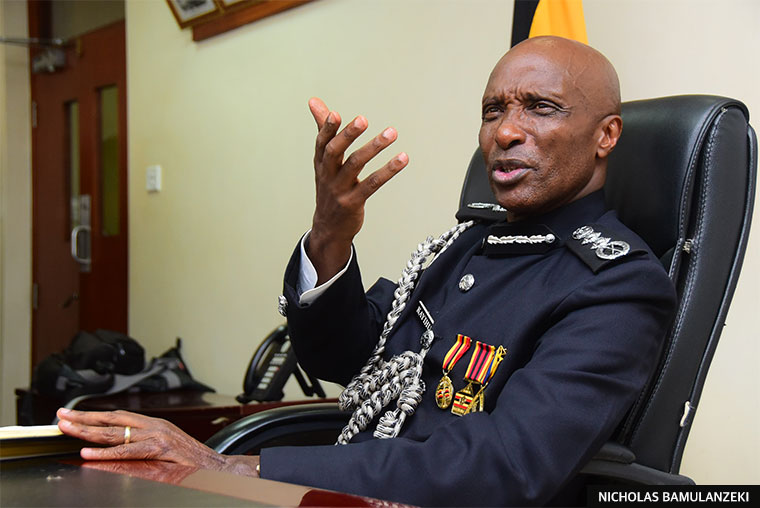 The former inspector general of police (IGP), Gen Kale Kayihura and his immediate family members will henceforth not be issued with a United States visa and will have their properties which he fully owns, or partly owns with others in the USA or in the control of US persons blocked over corruption, human rights abuses, bribery among others.

According to a statement released today by the US Department of Treasury, the Office of Foreign Assets Control (OFAC) is accused of having been a leader or official of a police force that has engaged in or whose members have engaged in serious human rights abuse against Ugandan citizens, as well as for his involvement in corruption.

"The U.S. government is committed to leveraging our human rights and corruption authorities to target, disrupt, and counter those who engage in abuse and corruption around the world."

The statement further reads that as a result of today’s action, all property and interests in property of Kayihura, and of any entities that are owned, directly or indirectly, 50 per cent or more by him alone or with other designated persons, that are in the United States or in the possession or control of U.S. persons, are blocked and must be reported to OFAC.

OFAC's regulations generally prohibit all transactions by U.S. persons or within (or transiting) the United States that involve any property or interests in property of designated or otherwise blocked persons.

Kayihura who was Uganda's longest-serving police boss for 12 years was sacked in March 2018 and replaced by his deputy Martins Okoth Ochola. US authorities say Kayihura was designated for being the leader of a police force that has engaged in or whose members have engaged in serious human rights abuse and being a current or former government official who is responsible for or complicit in, or has directly or indirectly engaged in, corruption.

"As the IGP for the UPF [Uganda Police Force], Kayihura led individuals from the UPF's Flying Squad Unit, which has engaged in the inhumane treatment of detainees at the Nalufenya Special Investigations Center (NSIC). Flying Squad Unit members reportedly used sticks and rifle butts to abuse NSIC detainees, and officers at NSIC are accused of having beaten one of the detainees with blunt instruments to the point that he lost consciousness. Detainees also reported that after being subjected to the abuse they were offered significant sums of money if they confessed to their involvement in a crime."

"In addition, Kayihura has engaged in numerous acts of corruption, including using bribery to strengthen his political position within the Government of Uganda, stealing funds intended for official Ugandan government business, and using another government employee to smuggle illicit goods, including drugs, gold, and wildlife, out of Uganda."

Kayihura could not immediately be reached for a comment.

The history of Mexico and Latin America, Vietnam, and Bin Laden's Islamic crusade to chase the Russian Pagans from Afghanistan. What of Noriega.

This is an African Police Officer who has agreed that he participated with the Americans to determine Law and Order in Uganda during the time this current government was rigging democratic elections left, right and centre.

Well if USA turns against you when you have been great friends working together, what exactly are you supposed to do?
Report to administrator
0 #22 Mubiru 2019-09-14 17:49
In his desperate and fraudulent attempt to appear as if he was never solely responsible for the mess in "his" Police does Kahihura honestly believe the public can't use their brains to judge and condemn the man who was known as "tear gas"?

Was the President who was so annoyed with Kayihura's handling of his duties dreaming or imagining that the Police was full of Kawukumi?

Your defensive article is fulll of "holes" which can be detected by most stupid fool ever lived in Uganda. Didn't you have committed any crime for which you were "tried "though you are now "free" for some obvious reasons to the extent of desperately defend yourself outside Makindye military court. You better shut up instead of provoking those who suffered your tyranny.
Report to administrator
+2 #23 rubagakene 2019-09-14 18:35
The United States of America is "barking at the wrong tree" or is this a veiled warning on the remaining cabal, I wonder! Pillows will do me fine, i will stuff my pillows and make do with 'marua' and pork from now on wards, and oh, milk!
Report to administrator
+2 #24 Miki 2019-09-15 07:38
The west uses you, then turns, chews you, and spits you in the fire.

Sometimes it is safer not to be the west's tool. Members of this regime uderstand.

That is why they must be quietly praying that the chaos in somalia plays on a little longer so that rhe west continues needing them.
Report to administrator
+1 #25 Remase 2019-09-15 14:27
It doesn't make any sense whatsoever to sanction Gen. Tear Gas Kayihura and his family but leave M7 and his family/relatives out.

US should should sanction M7, his family/relatives and cronies, and further refer them to ICC.

That will make a lot of sense because Kayihula derived his authority from M7, and whatever Gen. Tear Gas did, was done on orders from M7 and/or in the interest of M7.
Report to administrator
0 #26 Lakwena 2019-09-16 15:10
In other words starting with Maj Gen Peter Elwelu vis-a-vis Kasese Massacre, and now Gen Kayihura; the West is beginning to closing in on Mr. M7.

Because the US has a very long arm, which can fish out its enemies from their bathrooms and bedrooms; if I were Mr. M7 & Co. I would apologize, cut and run.

This is because e.g., you can't invite a wanted ICC suspect, Omar Al Bashir after bundling the West together during your swearing in on May 2016; and publicly humiliate them saying: "they are a bunch of useless people".

In other words, Mr. M7's crime against humanity impunity is also catching with him.

That Omar Al Bashir is now caged by his very Generals, what is so difficult about caging Mr. M7 together with most of his Generals like e.g. Peter Elwolu who committed atrocity in Kasese?
Report to administrator
0 #27 Lakwena 2019-09-16 15:25
Quoting Remase:

It doesn't make any sense whatsoever to sanction Gen. Tear Gas Kayihura and his family but leave M7 and his family/relatives out.

US should should sanction M7, his family/relatives and cronies, and further refer them to ICC.

That will make a lot of sense because Kayihula derived his authority from M7, and whatever Gen. Tear Gas did, was done on orders from M7 and/or in the interest of M7.

Remase, Mr. M7 has already bitten the bait longtime ago.

Like a skilled fisherman, the US is releasing the line and allowing Mr. M7 to swim around. But when the time comes, they will start reeling in the line and have a big catch and laugh.

when the temperature in Uganda under him was at 95 0C WASHINGTON was quit,now he can not boil the saucepan by 0 0C, WASHINGTON is pocking their long nonsensical noise on him yet another state of nature that has been existing still exist.
why do you waste time fighting mosquito?
Report to administrator
123