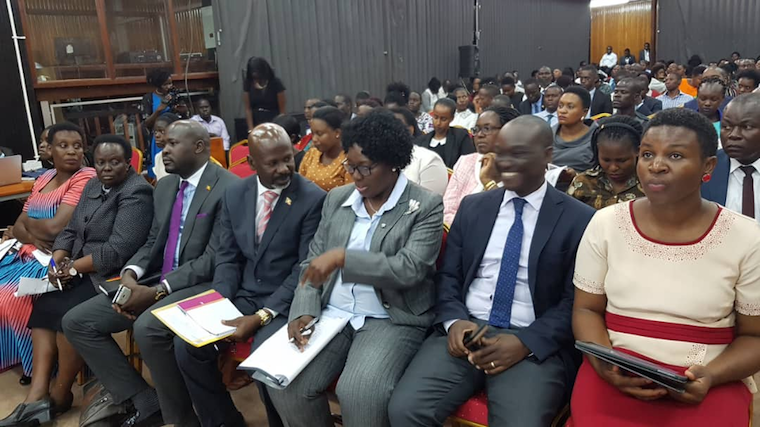 The speaker of parliament Rebecca Kadaga has advised Ugandan members of parliament and protocol officers to maintain dignity throughout the upcoming 64th Commonwealth Parliamentary Conference.

The conference, scheduled to take place between September 22 and 29 at the Commonwealth Resort Hotel in Munyonyo, Kampala, is expected to attract at least 1,000 delegates comprising of speakers and parliamentarians from across the 180 Commonwealth nations.

In her address to legislators and protocol officers of parliament ahead of the conference, Kadaga emphasized the need for etiquette as the first call for service, respect for the official dress code of parliament and cautioned them against sexually indulging with the delegates.
"You know when the Tanzanians came to this country [to fight Idi Amin], there was excitement and a number of children were born in this country by the Tanzanians. We know their mothers, but we don’t know their fathers…Don’t take risks. A man from Jamaica, when will you see him again? And for the men, a woman from the Pacific, Naulu when will you ever reach there. So you must really be very careful with what you do." she said.
She observed a need for professionalism in order to avoid compromising situations between the delates and the hosts.

“When you take them [delegates] to their rooms, stop at the door, you can put in the luggage together with the hotel waiter but don’t loiter in those rooms both women and men. Do your work and leave,” Kadaga said.

Kadaga also emphasized the need to observe acceptable table manners by the MPs and protocol officers - cautioning them not to 'overload' plates as well as mixing dessert and food.

“While eating, even when you are hungry, don’t rush,” said Kadaga, recounting an incident when a legislator who had accompanied President Yoweri Museveni choked on meat during one of the international engagements.

According to Kadaga, the MP was hit in the back and the piece of meat fell in front of former Tanzanian President Jakaya Kikwete, to the embarrassment of the Ugandan delegation. Kadaga further advised against excessive drinking to avoid embarrassment during the conference.
“Drinking should be done in homes and not excessively, to avoid fumes of alcohol in the morning, there was a time, we had a shortage of motor vehicles and we borrowed a car from one of the members, it had beer bottles inside and some had poured, it brought the speaker of Oman,” Kadaga revealed.

Kadaga said that the conference is a major event in the marketing of the country since the people coming will be able to know more about Uganda and speak about it and that whatever experience they get from here will determine how they speak about Uganda.
It is now 52 years since Uganda first hosted the Commonwealth Parliamentarians Conference which is hosted by Commonwealth Parliamentary Association. Africa has so far hosted 16 such conferences - Kenya thrice; South Africa twice; Mauritius twice; Uganda twice; Nigeria twice; Zambia once; Namibia once; Malawi once; Cameroon once and Tanzania once.

Maybe many of them will spread HIV/aids and other STI/STD to the foreign delegates, since Uganda has a higher risk of infection.
Report to administrator
+4 #2 Winnie 2019-09-12 00:26
It is a shame that MPs are spoken to as if they are teenagers.

Anyway, these protocol tips should be private. How do they end up in media?

Forgive my Greek and blame Kadaga who knows them best. Characteristics of maniacs, even in black and white situations the majority of our MPs don't think straight; they think with their lower parts.

Not only Kadaga but many times even the president himself digresses! Embarrassing.
Report to administrator
0 #7 Kelly 2019-09-12 12:40
So embarrassing for the country that a whole speaker of parliament has to advise adult "honourables" on Ethics and Morality.

Two things stand out. Being advised on food (eating behaviours) the way she did it means the MPs are a greedy lot in the literal sense. One wonders what happens to our little collections (treasury).

Secondly, Kadaga by advising them against reckless sex only points to what she knows about our MPs when it comes to pelvic agility.

No wonder so many stories abound on how our MPs "feast" on each other left-right-center!!!!

With the absence of services/development of constituencies, Ugandans still elect/renew mps' mandate!

In the rest of the world, dictators are thrown out in UNITY, leaders who fail to render services for which they are elected are NEVER reelected!

But Ugandans aare at peace & Museveni will rule them till he drops dead of old age! WHY?

Has Museveni not destroyed Ugandans & their country long enough?
Report to administrator
0 #10 mcknn 2019-09-12 14:44
shows you how proffessional our legislators are. By the time the speaker brings this up then she knows the people we have in our parliament are so backward, who mixes dessert and food hihihihih this got me.....
Report to administrator