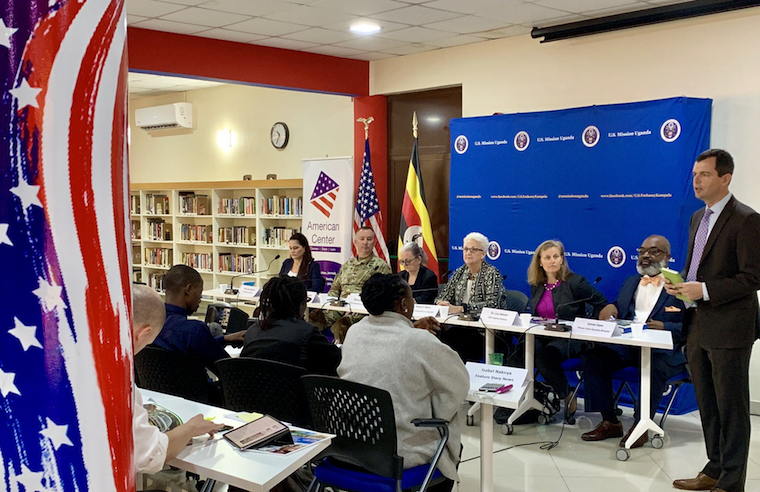 In an aggressive push for his “put Americans first,” agenda, the Donald Trump White House has repeatedly called for cuts to foreign aid, sending shivers down many beneficiaries’ spines around the globe, Uganda inclusive.

But in a media briefing yesterday at the American Centre in Nsambya, Ambassador Deborah Malac said the US congress had not allowed the reductions to take place; so, assistance to various Ugandan programs would continue as budgeted for.

“We are continuing with our programming until and if there is a reduction in the amount of funding we are receiving,” Malac said as she launched the Report To The Ugandan People.

Uganda received $896m (about Shs 3.3 trillion) from the USA in the fiscal year 2018, most of it going to the country’s chronically under-funded health sector.

The report also highlights the US mission’s work in agriculture, peacekeeping, refugee crises, rule of law and governance, among others.

Recognising the persistent poor ranking of the country by various corruption indexes, Malac said it is her government’s policy to work directly with implementing partners, and not directly with sitting governments, to ensure strict accountability for funding.

The launch was also attended by the heads of different US departments in Uganda.

South/Central Americans are financially helped by USA, yet they are causing chaos in US with migration as those want a share of the money USA gives their useless governments, yet the people don't see a cent!

If money given to Uganda government by USA/EU since 1986 had been put to good use, Uganda would be a first class developed country by now!

Migrants have understood & are going to USA/Europe to get served & just live!

R. Regan, GW. Bush, G. Bush, B. Clinton, B. Obama left Museveni in power & D. Trump will be the next one!...
Report to administrator
0 #2 Akot 2019-09-11 20:31
...Why does USA continue to give their hard earned money to Uganda ruled by Museveni since 1986, when US maintain real democracy with very very active opposition, peaceful change through peaceful but hard campaigns?

Does it make sense USA continues to finance the most inhuman tribalistic divisive 1 man rule the world has ever seen to let it just go on?

This is more so as Museveni has cleared way & already won next fake election, locked up even Dr Nyanzi for saying things just as they are, given the Uganda situation?

Why does democratic USA already in campaign for continuity of their democracy, giving money to Uganda ruled by 1 man since 1986 with no chance of another replacing him?

Now some idiots even want to lynch me.If we get you thugs, we shall cover you with tar and feathers and walk you in streets like stupid dogs, since you are dogs and fools!!
Report to administrator