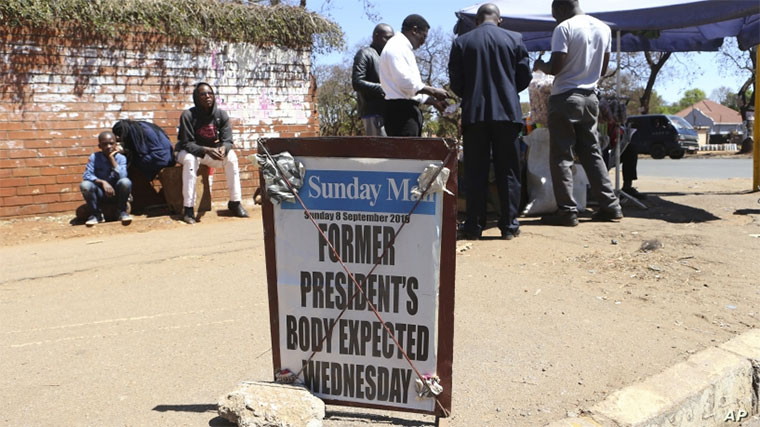 Days of official mourning begins in Zimbabwe for former President Robert Mugabe, who had become a national hero despite decades of rule that left the country struggling

Former Zimbabwe president Robert Mugabe's body will lie in state at two different stadiums in the capital city for three days, the information minister said Monday, but she did not announce where he would be buried on Sunday.

Mugabe, an ex-guerrilla chief who took power in 1980 when the African country shook off white minority rule and ruled for decades, died on Friday at a hospital in Singapore. He was 95.

Information minister Monica Mutsvangwa said in a statement that the government has dispatched vice president Kembo Mohadi and other senior officials and family members to Singapore to accompany Mugabe's body home.

The body will arrive in the country “any time on Wednesday,” she said. The body will lie in state at Harare's Rufaro Stadium and then at the National Sports Stadium, also in the capital, she said.

Mutsvangwa said Mugabe would be buried on Sunday but she did not say where he will be buried, saying more updates will be provided “as more information on the program trickles in.”

Presidential spokesman George Charamba and deputy information minister Energy Mutodi at the weekend said the former authoritarian ruler would be buried at the National Heroes' Acre, a monumental burial site reserved for people viewed by the ruling ZANU-PF party as having served the country with distinction during and after the 1970s war of independence. Mugabe's first wife, Sally, is buried at Heroes' Acre and a vacant plot reserved for the former president is next to her grave.

However, family spokesman Leo Mugabe, a nephew of the former president, said over the weekend that burial arrangements have not yet been finalized. This has prompted speculation of a rift between the government and members of Mugabe's family, who want him to be buried at his rural home in Kutama, about 85 kilometres (52 miles) southwest of Harare.

Leo Mugabe told reporters that Mugabe had died “a very bitter man” because he felt betrayed by the former political and military leaders who were his allies for close to four decades before they forced him to resign in November 2017. "Imagine the people that are guarding you, that you trusted the most, turn against you."

He dismissed reports that Mugabe had refused to be buried at the Heroes' Acre, but also refused to say where the burial will take place.

Mugabe had dominated Zimbabwean politics for almost four decades from independence in 1980 until he was removed by his own army in a November 2017 coup. Revered by many as a liberator who freed his people from white minority rule, Mugabe was vilified by others for wrecking one of Africa’s most promising economies and ruthlessly crushing his opponents.

President Emmerson Mnangagwa, who worked closely with Mugabe for decades before helping to oust him, granted Mugabe the status of national hero within hours of his death.

The memo sent by Zimbabwe’s ministry of Foreign Affairs to embassies in Harare and seen by Reuters said the funeral would be in the National Sports Stadium but did not specify where the burial would be. It said heads of state would be expected to leave the stadium immediately after the funeral ceremony because officials would be busy with preparations for the burial.

The Zimbabwe Independent newspaper reported last month that Mugabe didn’t want to be buried at National Heroes Acre - a site reserved for the country’s heroes - because he felt bitter about the way he was removed from power.

In comments to The Sunday Mail newspaper, Mnangagwa’s spokesman George Charamba denied that the government and Mugabe’s family were at loggerheads over where the former president should be buried and said the provisional plan was for the burial to be at National Heroes Acre.

The Sunday Mail said Mugabe’s body was expected back from Singapore on Wednesday afternoon and that Mnangagwa, members of Mugabe’s family and traditional chiefs from Mugabe’s Zvimba district would receive the body at Harare’s Robert Gabriel Mugabe International Airport.

Leo Mugabe, the former president’s nephew, told Reuters earlier on Sunday that Mugabe’s family and traditional chiefs had finalised their preferred programme for his burial but it had yet to be approved by the government. He was not available for comment after Reuters saw the government memo.

At the packed Sacred Heart Cathedral in Harare, where Mugabe used to attend Catholic Mass with his first wife Sally and second wife Grace, people prayed on Sunday morning for their departed former leader.

“We are praying for our relatives who have died. Without forgetting to pray for our former president, Comrade Robert Mugabe, we bring him forward to God. We are asking God if there is anything that he did wrong in his life that he be forgiven,” the priest told the congregation, speaking in the local Shona language.

Chris Sambo, a former soccer administrator who used to arrange matches for Mugabe in his home village of Kutama, said the southern African country’s Catholic community had lost one of its most important members.

Tsitsi Samukange, another churchgoer, said Mugabe was a devout man who fought for his country.

“I think everyone can admit that without the work he did we would not be as independent as we are,” she said.

“You know when you fight, in a fight sometimes you lose your teeth, (right)? And we became poorer. But that’s a fight and he did it, and we should give him that.”

Many Harare residents said at the weekend that they were saddened by Mugabe’s death and that it marked the end of an era. But his ousting in 2017 was accompanied by celebrations across the country of 13 million and critics at home and abroad viewed him as a power-obsessed autocrat who unleashed death squads, rigged elections and ruined the economy to keep control.

A priest on Sunday opened the church service by paying tribute to the former ruler and asking congregants to forgive him.

"He did a lot of positive things for our country but not everything that he did was right. We should learn to forgive for all the wrongs he may have committed. May God grant him mercy," said Father Richard Mushuku.

"Being a Catholic, he tried his level best to live according to Christian values and I know people have mixed feelings in the way he practiced his Christian values," Kennedy Muguti, the vicar-general of the archdiocese of Harare, told The Associated Press after the Mass.

Alex Ngwena, a parishioner, said: "current leaders must learn from his mistakes."

0 #1 Lakwena 2019-09-11 11:56
It is unfortunate that the demise of Mugabe is now received with a sigh of relief, like the death of a venomous snake, a python or a crocodile; which was terrorizing a village.

When the terror reptile: venomous snake, a python or a crocodile passes on, in large number the villagers would flock the scene (stadium) of death and say: finally our children, chicken and goats will be free to move, without the fear and terror of being gobbled up.
Report to administrator