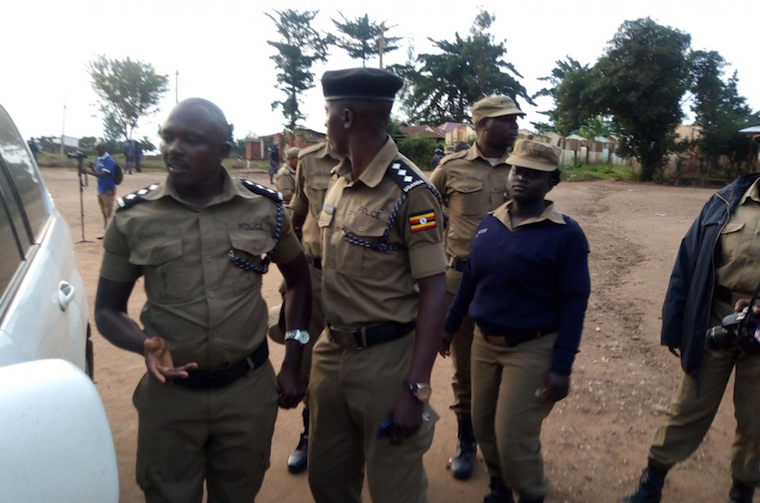 Police officers at the venue of the rally

Police in Mbale on Saturday fired tear gas and live bullets to disperse supporters of Forum for Democratic Change (FDC) who had gathered for a rally in Namakwekwe ward, Northern Division.

FDC had organized a rally where the FDC party president Partick Oboi Amuriat, former presidential candidate Kizza Besigye, and other party leaders were meant to address the people. Police fired tear gas canisters to disperse the FDC supporters who had turned up for the rally and had waited for over 5 hours.

Amuriat, and three other FDC supporters were arrested and taken to  Mbale Central Police station. According to residents, police started using tear gas and live bullets to disperse the people who had gathered before the arrival of the FDC leaders.

Police said that FDC leaders wanted to hold an illegal rally which was not cleared by the IGP and that it was late for a rally to be conducted beyond 6:00 pm.

Amuriat told journalists shortly after he was released on bond that they only wanted to greet their supporters and inform them that it was late for them to hold a rally. Amuriat said that they had gotten clearance from the IGP for them to hold their mobilization meetings and police blocked them out of error.

He said that he would not go back to Mbale to report himself to police on issues of bond and therefore police should look for him wherever he will be. Before going for the foiled rally, Besigye and Amuriat earlier on addressed the FDC party leaders from Bugisu sub region on how to advance the people’s government ideology.

Besigye asked the local party leaders to remain strong and prepare to take up power because they have weakened President Yoweri Kaguta Museveni.

0 #1 Jama 2019-09-09 19:57
Indeed all these repressive acts signify the limit of a fragilised regime.
Report to administrator
0 #2 kabayekka 2019-09-09 22:19
Dodgy Opposition members. What the opposition is trying to tell their supporters is already being told to them by the tough Uganda Police force.

Why then do they want their supporters to come over and be beaten up and tear gassed?
Report to administrator
0 #3 karemire 2019-09-09 22:41
In this way, the government is contributing heavily into popularizing the PP & FDC alliance.

STRATEGICALLY, all FDC should continue to do is schedule MANY such meetings in other corners of Uganda while knowing very well that they would be blocked.
Report to administrator
0 #4 Lakwena 2019-09-11 13:16
But my concern is: like dumb asses, don't these police officers realize that; because Mr. M7 despises them, he makes them directly or indirectly do his dirty bidding/works of brutalizing Ugandans?

In other words, after brutalizing Ugandans who pay their salaries, buy the uniforms on their backs and the guns, they point at Ugandans, and the teargas canisters, they lob at the same citizens; do they happily go to their homes/ families after such cruelty?

There is something terribly abominable going wrong with this country.
Report to administrator