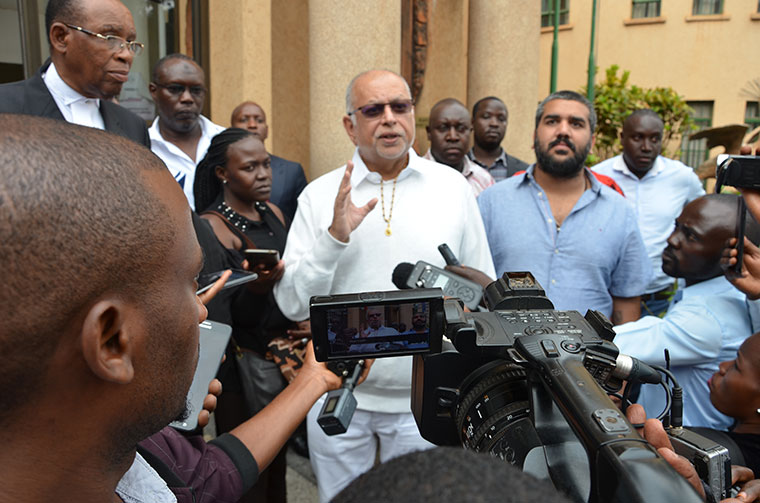 The High court has dismissed the Bank of Uganda and Crane bank (in receivership) suit against businessman Sudhir Ruparelia and Meera Investments over lack of legal basis to sue.

Delivering the ruling yesterday August 26, Justice David Wangutusi, ordered BoU to pay the suit costs to Sudhir. The ruling follows a suit in which the chairman Ruparelia Group, had been accused of taking Shs 397 billion out of the financial institution in alleged fraudulent transactions and land title transfers.

Under civil suit no. 493 of 2017 that had been instituted by the Crane bank (in receivership) against the applicant, Sudhir and Meera Investments sought for dismissal of the suit on the grounds that it was barred in court and did not disclose a course of action.

At the onset of this suit, Sudhir had another battle in a conflict of interest case where lawyers of MMKAS Advocates, David Mpanga of AF Mpanga-Bowmans and Sebalu & Lule Advocates were barred from representing BoU and any party in cases involving Ruparelia Group. The conflicted lawyers formerly worked for Ruparelia Group.

In July 2017, Bank of Uganda, as receiver of Crane Bank Limited (Crane bank) and regulator of the banking sector sanctioned the filing of a suit against Sudhir and Meera Investments to recoup funds that were allegedly extracted from, as well as losses that were caused to Crane bank.

The suit sought to recover a total of $92.8 million together with the freehold titles to Crane bank’s branches, general damages, interest, and costs. In his 20-page ruling, Justice Wangutusi said “In the instant case the deponent of the affidavit in reply has put it on oath that Bank of Uganda instructed the advocates. It must have been the one that paid the court fees and it was certainly the one behind the plan. The Bank of Uganda should, therefore, be the one to pay the costs,” Justice Wangutusi said.

“In conclusion, the respondent did not have jurisdiction to file HCCS No, 493 of 2017. It is also my finding that the property the respondent was seeking when he filed the suit on June 30, 2017, had earlier been given away by the receiver to dfcu bank on January 24, 2017 four days into the receivership and five months before the filing of this suit thus leaving the respondent with no property.”

Efforts to get a comment from Bank of Uganda were not fruitful. However, a statement posted on the BoU website states “While the bank is cognisant of the level of public interest generated by this case, we are constrained in commenting extensively until the matter is resolved by court.”

At the hearing of the application, counsel for the applicants (Sudhir and Meera Investments), submitted that the BoU suit should be struck out because the respondent has no locus to bring the suit.

He submitted that the Financial Institutions Act (FIA) provides ways in which the Bank of Uganda may take over and resolve the financial institution that is in distress. The applicant’s counsel cited section 89 of the FIA, contending that from October 20, 2016, to October 20, 2017, the respondents could institute a suit under sections 89 (1), (2) (e) and (9) of the Act, however, from January 20, 2017 when the respondent was placed under receivership, the power to sue was lost.

“The facts giving rise to Crane bank’s claim are set out in detail in the papers that were filed in the High court and the defendants shall be given an opportunity to formally respond, as is their right” a statement from BoU posted on their website said.

“We have observed that there is a lot of unfounded speculation in the media regarding this court case. We wish to assure the public that any allegations that the suit is being brought by the Bank of Uganda and/or its lawyers for purposes other than the recovery of the funds and properties due to Crane bank are false.” the statement added.

In this suit, Bank of Uganda instructed MMAKS Advocates and AF Mpanga Advocates (Bowmans Uganda) to represent Crane bank. BoU will settle any legal fees in accordance with the law governing remuneration of advocates.

+1 #1 Lakwena 2019-08-27 14:43
In other words, because of Bank of Uganda sloppiness and/or alliance and syndicate with the cabal of Mafia, the Ugandan taxpayers will lose their shirts and skirts to Sudhir.
Report to administrator
+1 #2 citizen 2019-08-27 20:58
The Guptas of Uganda, they are above the law, can pollute the environment, steal tax payers money loaned to their bank to keep it afloat, take public land etc.

They can spread propaganda to collapse a well functioning bank etc. The present day Pharaohs.
Report to administrator
0 #3 rubangakene 2019-08-27 22:05
We can't win, can we? Just imagine one individual "running circles" around the whole educated nation.

Do you think if we had a strong institution and leadership in the form of Idi this would have happened? I will vote for the People Power Party.
Report to administrator
+1 #4 Kelly 2019-08-28 09:18
Lakwena, this a well-choreographed syndicate involving the kawakumi in BOU and the cabals in MoFPED, Accountant General’s office and of course plot 1, Uganda. There are worse kawakumi in BOU than in police.

Look, BoU is not a profit oriented entity, never supervised by anyone, can print bank notes as and when it deems fit and is never subjected to any reporting. So why not pinch a little Ugx, 397Bn from the state coffers, connive with Singh Ramesh a.k.a SR (that is how Sudhir Rupriela’s personalized posh cars are registered), and eventually allow the money “vanish” like that.

Do you think the “incompetence” being exhibited by many government agencies is actual or stage managed? Government employs some of the best brains in every department but see how they deliberately “mess” up cases. KCCA-UGX 68 Bn in court cases; UIA N-billion; MAAIF Y-billion etc.

The Bank leadership is not even bothered that it pursued a frivolous suit. People need to be personally accountable for their actions.

Otherwise it's the good citizens who suffer the burden. Look at the proposed taxation on NSSF interest. The best they can do for the citizens is to drain each and everything
Report to administrator