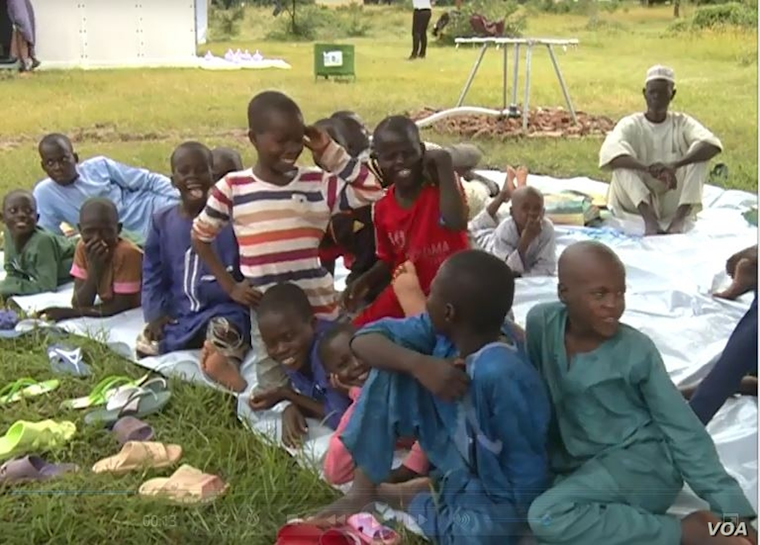 A group of 133 Nigerian refugees, mostly children, who are to be transported to Yola in Nigeria's Adamawa state waits in Maroua, Cameroon

At least 130 Nigerian refugees who fled the Boko Haram insurgency have been flown back from Cameroon in the first phase of a voluntary repatriation exercise organized by the host state, their country Nigeria and the United Nations.

The group of 133 refugees from 25 families was bound for Yola in Nigeria's Adamawa state, expressing hope they will find peace in their country after several years of atrocities that made them escape.

Among them was 31-year old Alim Bourkadia, who was anxious to return after four years in Cameroon.

"We say thank God to Cameroon that helped to keep us in their country and today, our country needs us. Thanks [to] Cameroon and UNHCR that helped us," he said.

Bourkadia was one of 110,000 Nigerians whom the United Nations says fled to Cameroon from Boko Haram-related violence in Nigeria. He left Cameroon's Minawao refugee camp, which is home to nearly 90,000 people. At least 30,000 additional refugees have been living in villages surrounding the camp.

The United Nations refugee agency, UNHCR, has not said how many people have voluntarily agreed to return. Sadiya Umar Farouq, Nigeria's minister of humanitarian affairs, disaster management and social development, says the refugees are leaving following a March 2017 tripartite agreement for the voluntary repatriation of Nigerian refugees living in Cameroon. Cameroon, Nigeria and UNHCR signed the deal.

Farouq says the necessary arrangements have been made for the refugees' socioeconomic reinsertion into Nigeria.

"We are going to put them in a reception center for a maximum of seven days, after which they will be taken back to their respective communities," she said. "We are going to support them with skills, with empowerment so that they can be back on their feet. They can be economically self reliant."

Midjiyawa Bakari, governor of Cameroon's far north region that shares a border with Nigeria, says many of the refugees want to return, but are reluctant because airlifting them with the animals they have been keeping in Cameroon is difficult.

"Many refugees have luggage, have cows, but it is difficult to go back by air and that is why some of them are still thinking that it is necessary to see [look for another] way or means to enable them to go back with all they gather [have] here without any problem," he said.

Bakari said Cameroon's government will let them go with their livestock by road when they are sure of their security.

Last week, Cameroonian authorities warned that Boko Haram may be planning raids that could affect schoolchildren and their teachers when the academic year begins Sept. 3. Officials have begun giving consignments of food, money and equipment to militias on the northern border with Nigeria, defending areas from which the military has withdrawn.

The United Nations reports that the 10-year Boko Haram violence has displaced more than 2.7 million people, including some 210,000 Nigerian refugees into neighboring countries. The insurgent group promotes an extreme form of Islamist fundamentalism and opposes Western-style education.

+3 #1 Lysol 2019-08-23 21:29
The refugees from all our neighboring countries should also emulate those Nigerians and return home Instead being given free land and destroying the environment.

Unfortunately the corrupt regime(of Museveni) uses them for both financial and political gains, by trying to win favors from The Western powers. Not knowing that the regime is the one which always meddles in the neighboring countries internal affairs.
Report to administrator
+1 #2 kabayekka 2019-08-24 21:24
It is unfortunate that Nigeria gave so much away to remove apartheid from Southern Africa and the same is now happening to them.

The country has oil wealth and the human resource to get on. The Biafran war made it clear to all the people of Africa that if a political coalition breaks down, the best is to go back to the people for an answer.

There is no need for you an African to get all your friends to come over and kill all the neighbouring people that you do not agreed with.
Report to administrator