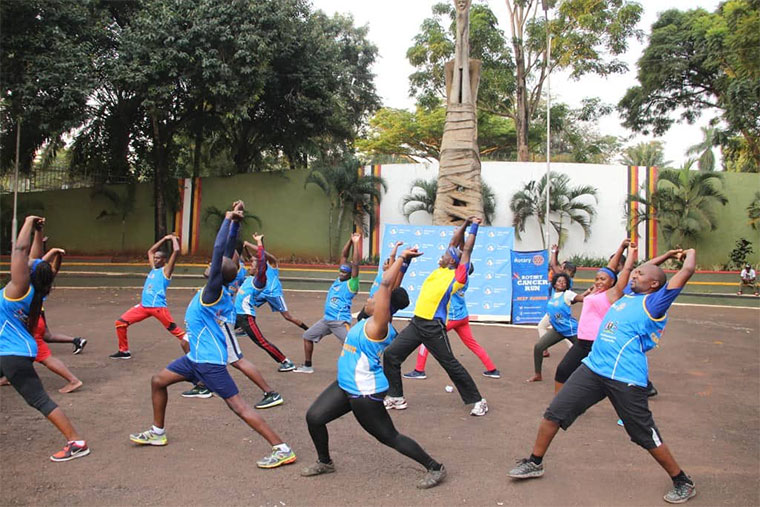 Warm up exercises at Cancer Run

More than 50,000 people are expected to participate in the 2019 Rotary Club Cancer Run scheduled for Sunday, August 25.

According to Charles Odaga, a member of the Cancer Run committee in charge of routes, they have already surpassed last year’s 35,000 participants.

“We anticipate having a total of 50,000 runners in 40 towns across the country. We are well into achieving this target. We are running even at our missions outside the country, in Kigali, Moscow, and Nairobi among others; this is now a global event.” Odaga said speaking at a press conference Friday at Kololo airstrip.

“There will be route markers and water points at different points. In case of any emergency, we shall have ambulances plying all routes that shall assist,” Odaga said.

Speaking at the same event, Superintendent of Police (SP) Kauma Nsereko Rogers, the assistant traffic commander for Kampala Metropolitan Police said as police, their major concern is the safety of people and their property. He named City High School, Lugogo Forest Mall, and Hotel Africana parking lots as the gazetted places for participants to leave their cars.

“Kololo Grounds will be for the very important persons only. If you know you don’t have a sticker, maybe for this occasion, you were not considered a VIP; we don’t expect you to come with your car,” Kauma said.

He cautioned drivers not to abandon their cars on road pavements or greenbelts.

“If you do, we shall tow it to the nearest police station at your cost,” Kauma said. He added that some of the roads that will be used by the runners will be closed off to traffic at least for the time that runners are using them.

Fred Enanga, the spokesperson of Uganda Police called on all participants to obey orders given to them by security agencies.

“We encourage runner safety IDs so that in the course of the marathon, our officers can identify effectively all those who will be participating so that in case of emergencies they are easily identifiable,” Enanga said.

He added that participants should avoid coming with prohibited items like narcotics, firearms, sharp objects among others. Over Shs 1 billion is expected to accrue from this year’s run that will be used to construct a bunker at the Nsambya hospital cancer centre.

We need to begin by identifying the cause of these cancers instead of focusing out attention on treatment which is never sufficient and is a preserve of the rich
Report to administrator
0 #2 Akao 2019-08-24 03:12
So who are these very important persons coming for the run that Kololo ground parking is reserved for?

The police or army? There are too many medicore very important persons in Uganda these days, who want to show up everywhere to feed their ego.

This should be about run for cancer, cancer does not whether a person is a president or a bodaboda
Report to administrator