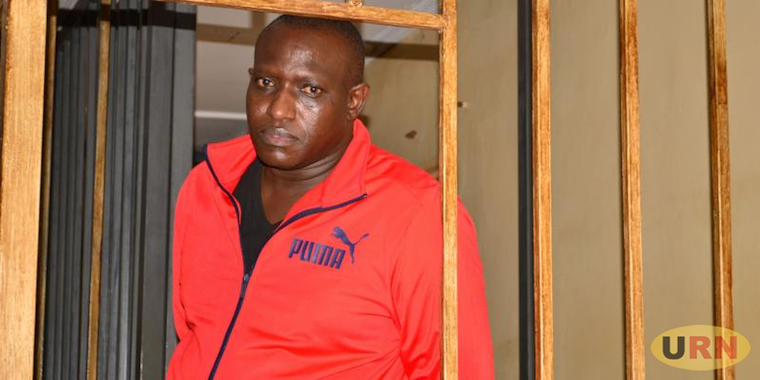 Sam Buchanan in the dock

Buchanan, who is the chairperson of Great Stickers International, which promotes professional kicking boxing, is well known for his flamboyant philanthropy.

Prosecution led by Maj Samuel Maserejje told court that on August 16, 2019, Buchanan a resident of Buziga in Makindye division was found in possession of a pistol and 18 rounds of live ammunition, which are ordinarily a monopoly of defense forces.

As a result, Gutti entered a plea of not guilty to both charges and remanded the suspect to Kigo prisons until September 3 despite the lawyer's pleas for the suspect to be remanded to Luzira prison instead.

Buchanan was picked up from his home by operatives from the Chieftaincy of Military Intelligence (CMI) on Friday last week on allegations that he was involved in counterfeit currency deals with intentions of defrauding foreigners. However, the army could neither confirm nor deny the allegations levied against him.

He was charged in the military court a few hours after High court judge; Henrietta Wolayo declined to hear a habeas corpus application filed by his lawyers of M/S Johnson Njoki and Company Advocates against security chiefs and the attorney general.

The application was backed by an affidavit sworn by Buchanan’s wife, Patricia Magara, saying she last heard from him on Friday.  Justice Wolayo adjourned the matter until Thursday arguing that Buchana’s lawyer needed to first serve the attorney general before the matter is heard.

In this case, it is a Gold-deal/racket gone bad. Therefore why isn't the police handling the matter/fraud?

But Ugandans who want posses guns, are also those who want to terrorize and kill Ugandans thru the power of the gun.

E.g. former Arua MP Godi ended up killing his fiance using a gun, and now he locked up coming to 10 years and his future ruined because of the power of the gun.

In other words, like Mr. M7, without any happiness; all gunmen/women have no future. They only buy time thru the dark terror of the gun.
Report to administrator
0 #2 Lakwena 2019-08-21 11:04
E.g., where has the power of the gun landed Kitatta? The guy philosophically bragged that "power is more important than the law". But he was dead wrong: the long arm of the law will always outlive raw power.

In other words, throughout the centuries, it has been tried and tested, as a humble reminder including Mr. M7; those who live by the sword/gun, will perish by the gun.
Report to administrator
0 #3 WADADA roger 2019-08-31 15:44
Do these guys ever listen to themselves, i hear "....... Prosecution told court that Buchanan was found in possession of a pistol and 18 rounds of live ammunition, which are ordinarily a monopoly of defense forces.............."

Wow, i thought somebody would tell us that he- Buchana does not have a licence to have a gun. May be the Government is at it again, playing games to show that there is rule of law
Report to administrator