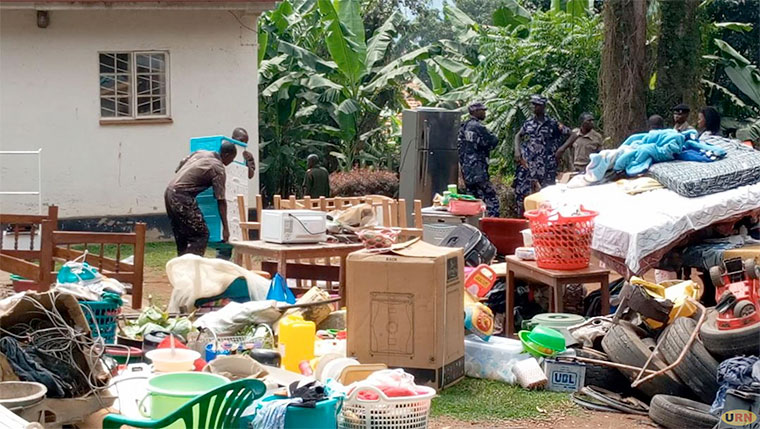 Sources in the university say employees from the estates and works department accessed Kitumba’s residence on Monday evening under the instruction of the acting deputy vice chancellor, Prof William Bazeyo and removed the water and electricity meters - effectively cutting off supply.

“They said they were forced. They had to do it unwillingly for fear of suspension. I visited the family at night and I confirmed they had also removed the Yaka-meter,” a professor told URN on Tuesday morning on condition of anonymity. Adding that, “They also took the power meter from the electricity pole together with the connection cable.”

Dr Muhammad Kiggundu Musoke, the acting manager communications and international relations said that he'd heard about the matter. “You know I heard about it last evening, let me reach campus and establish the facts on the ground then I will give you concrete information,” he said.

Kitumba’s lawyer, Isaac Ssemakadde said: “This is unbelievably sad but true.” According to Ssemakadde, the actions of the vice chancellor Prof Barnabas Nawangwe and his deputy contravene the order from the Labour officer.

"This confirms our criticism of the Nawangwe’s administration. They can be so petty and vindictive. It's high time somebody cracked the whip on Nawangwe and Bazeyo for their contempt of the law and human rights violations,” Ssemakadde told URN.

Adding that, “For the umpteenth time this year. The two have endorsed malicious and humiliating actions against a former high ranking staffer at Makerere University.”

Ssemakadde avers that, by failing to rein in on their subordinates in the estates and works department, the Nawangwe administration has set a very bad precedent for labour relations.

“No staff living in university accommodations is safe and secure from these goons who can invade your home and destroy critical health, safety and security infrastructure with impunity,” Ssemakadde observed.

Last week, Ruth Kulabako, the labour officer in charge of Kawempe Division faulted Makerere university authorities for executing the eviction unlawfully. Ssemakadde maintains that his client, Kitumba is occupying the house legally since he has not been officially sent out by the university.

Section 43 (5) of the Employment Act stipulates that where an employee is being housed by the employer, he/she shall not be required to vacate the premises until his/her terminal benefits are paid.

The same Act provides for the payment of an employee’s wages and any other remuneration and accrued benefits to which he or she is entitled to in case of termination of his or her employment. There are reports that during the attempted eviction on Friday, part of Kitumba's property was damaged and stolen.

According to Kitumba, the university owes him a lumpsum payment of his salary and gratuity arrears amounting to over Shs 200 million as required by law. Kitumba and Nawangwe have clashed before after the former advised government to take over Makerere University's revenues citing under declaration by the authorities that Nawangwe heads.

Intellect is usually associated with logic and good judgment. Defying a court order is neither clever nor wise and displays a lack of respect for the Law. The same Law incidentally that I suspect he will be relying on should he find himself "in the line of fire".
Report to administrator
+2 #2 WADADA roger 2019-08-20 20:49
I think it is hight time Kitumba realized that he is not wanted, before long, he may find himself dead
Report to administrator
0 #3 WADADA roger 2019-08-20 20:51
The Mafias are every where, i guess somebody wants that job and house so badly, such is the world but whoever prepares a bed of thorns for others to sleep on will find himself in that same position, they say Kama is a beach, what goes around comes around.
Report to administrator
-2 #4 Lysol 2019-08-20 21:25
Does this poor man works for the Observer. We are tired of his story. Move on, please.

There are more important stories/news out there than wasting time on one individual who is a squatter and homeless.

May be he blew his money on alcohol or drugs and women. A fake and incompetent engineer.
Report to administrator
0 #5 rubangakene 2019-08-20 22:01
The conditions of Kitumba's property speak volumes; either the guy was "cadre" honestly working diligently for the good of the university or he was hiding his real self.

Still, in Uganda you reap what you sow. What I don't get is the sheer vindictiveness that the university has bestowed on this poor chap.

If he hasn't bought any cows back home, he could end up looking after someone else's cows in lieu of milk.
Report to administrator
-2 #6 Byansi Martin 2019-08-20 22:26
A former director of ICT fighting to stay in the 1930 houses! Also want transport for apparent trush ...
Report to administrator
0 #7 Ugthinker 2019-08-21 09:32
Before it was the Generals disregarding Court directives, now even professors!

The other day a magistrate in her own courtroom had a bottle thrown at her! Our society is steadily breaking down, thanks to NRM lawlessness. Ugandans deserve better!
Report to administrator
0 #8 Lakwena 2019-08-21 13:43
In other words, either the University's Legal Officers are the dumbest and therefore a liability to the University; or each time they are in cahoot (syndicate) with the lawyers of the University employee victims, to lose cases and get kickbacks and sidekicks from court awards to the victims.

That is the kind of cannibalism practiced in Uganda: you cannibalize the people you work with.

This is because, I haven't heard of court cases in which Makerere University won after being sued by its employees.
Report to administrator
0 #9 Lakwena 2019-08-21 14:00
But does the University authority have the mandate and authority to remove National Water and Sewerage Corporation (NWSC) water and UMEME electricity meters?

In other words, the duo can sue the university for vandalizing their installations, damaging their reputation with their clients and sabotage and causing financial loss.
Report to administrator