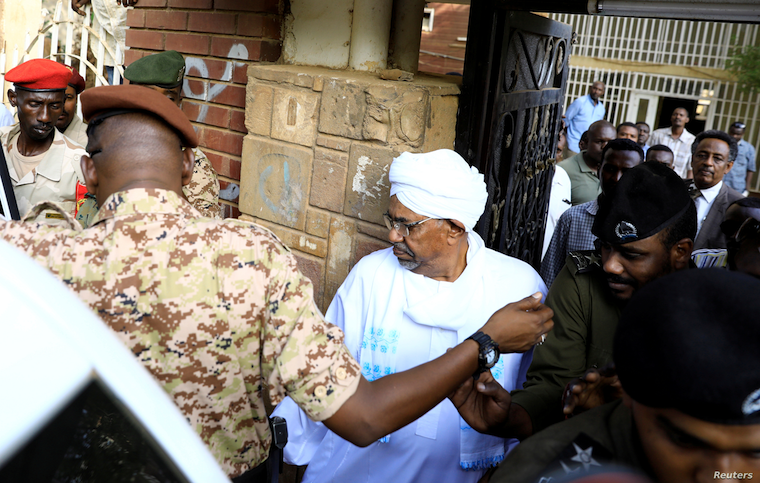 Sudan's former president Omar al-Bashir appeared in court Monday to face corruption charges, four months after he was ousted by the military.

Bashir, who ruled Sudan for 30 years, is charged with illegally possessing foreign currency and receiving gifts in an illegal manner. According to a detective who addressed the court, Bashir told investigators he had received millions of dollars in cash from Saudi Arabia. Many Khartoum residents were disenchanted with the trial, many of them saying that it was too little and too late.

“The Bashir trial is a bit disappointing,” Abdullah Mahmoud told VOA.  “They are just ignoring the elephant in the room – they are ignoring the genocide – he should be on trial for genocide and killing people first.”

The International Criminal Court has charged the former president with war crimes, crimes against humanity and genocide for his actions during the long-running war in Sudan's Darfur region.

In May, Bashir was also charged with incitement and involvement in the killing of protesters who challenged his rule.  Four months of escalating protests prompted the military to remove Bashir from power on April 11.

The 75-year-old Bashir, dressed in traditional white robes, watched Monday's proceedings from a cage inside the courtroom. His lead defense attorney, Ahmed Ibrahim al-Tahir, told VOA's Peter Clottey that the former president is confident of beating the corruption charges.

The attorney acknowledged that Bashir received money from abroad but said his client used the money for public purposes, such as funding hospitals.

"I think he's very calm, he’s very confident and he’s sure that he's very honest and innocent and nothing — not even a penny — went through the pockets of his family or of his friends from this money," al-Tahir said.

Meanwhile, Sudan's military leaders and the civilian-led opposition have named some members of the sovereign council that will lead the country in a power-sharing transitional government.

The military appointed two lieutenant generals, Mohamed Hamdan Daglo and Abdul Fattah Al-Burhan, who are widely blamed for attacks against protesters which killed at least 120 people on June 3.

But Ahmed Ibrahim al-Tahir,, for heaven or hell's sake, Bashir is not calm, but the guy is just dumbfounded that he has ended up in a cage.

But in any case I like the way the Arabs cage their former tormentors. E.g. could not believe he would end up being caged like a wild beast; yet indeed he is.

I do not know whether God can answer my prayer that: one day however old he would be, our Mr. M7 will also be caged.

In other words, we shall import and airlift the cage from Cairo or Khartoum to Kigo, Lugore or Adjumani Prison. Eish.
Report to administrator