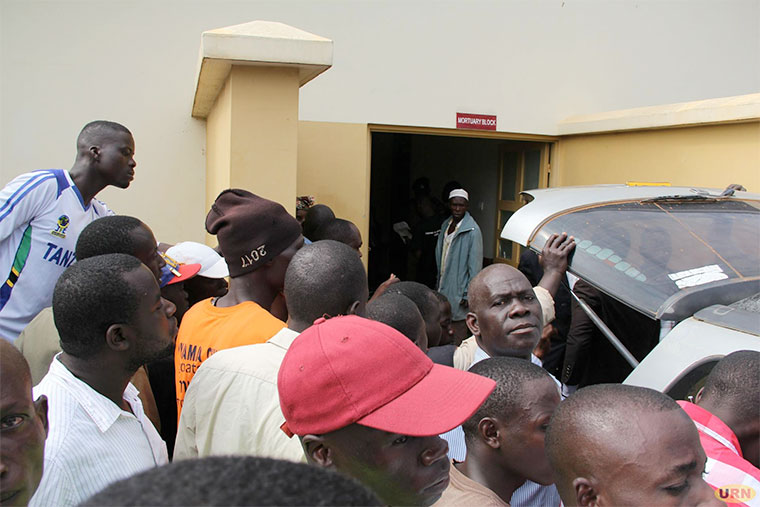 The accident, which occurred in Bukonte trading center along the Iganga-Tirinyi-Mbale highway on Sunday evening claimed the lives of ten people aboard the taxi. Nine people were killed on the spot while another victim breathed his last this morning at Iganga general hospital.

This morning, the Busoga East Region police spokesperson, James Mubi identified six of the deceased accident victims as Ibrahim Waiswa, a resident of Bugweri, Afuwa Munaba, a resident of Budaka, Florence Kyazike of Luuka district, Umar Okwi, a resident of Iganga, Simon Lokutu and Godfrey Muhwesi, both from Bugiri district.

The survivors are Babra Nairuba, Slyvia Kampia, Robinah Mudondo, Ismael Maganda, and Joel Mawanda. Mubi said they have handed over the bodies of some of the deceased to their relatives.

“Some of the bodies have been handed over to the relatives but we are still screening them and making a follow up using the recovered phones and sim cards to try to search for the families of the deceased persons,” he said.

Issa Isabirye, a doctor attached to the causality ward at Iganga hospital told URN that three of the accident victims are out of danger and responding to treatment. He says two other victims have been referred to Jinja regional referral hospital for further management.

In other wards a distance from Kampala to Mbale must take no less than a specified time, say four and a quarter hours.

If the buses arrive sooner, fine the company the cost of a new bus payable within five days. Once an individual is banned from driving a bus, he or she will never drive one or a vehicle of a higher class again in the country. Just my thoughts.
Report to administrator
0 #2 Lysol 2019-08-19 20:47
Those narrow two lanes roads/highways built by the corrupt regime are recipes for death.

Poor road engineering and planning. Even though some accidents are staged.
Report to administrator
0 #3 Wainanchi 2019-08-19 21:40
Unbelievable!! Huge losses of people! Drivers inexperienced for new conditions and new roads!

Police where are you!!??? Condolences to the families who lost their loved ones!

Where are now usual blabla bla commentators??
Report to administrator
0 #4 WADADA roger 2019-08-19 22:08
I do not know what is happening to YY buses, every other day you hear that they have knocked somebody dead or have caused and or have been involved in an accident.

Is management failing to use well trained drivers or the drivers are over worked or the buses are to old and in a dangerous mechanical condition
Report to administrator
0 #5 WADADA roger 2019-08-19 23:12
Passengers should stop using buses belonging to YY until the management of the bus company put their house in order, this is not acceptable
Report to administrator
0 #6 rubangakene 2019-08-19 23:20
There is something wrong in the department that should ensure road safety in Uganda and it must be investigated seriously.

May be too many officials are sitting on their backsides in Kampala or the "proverbial cancer" - CORRUPTION, IS FACILITATING THESE DEATHS!
Report to administrator