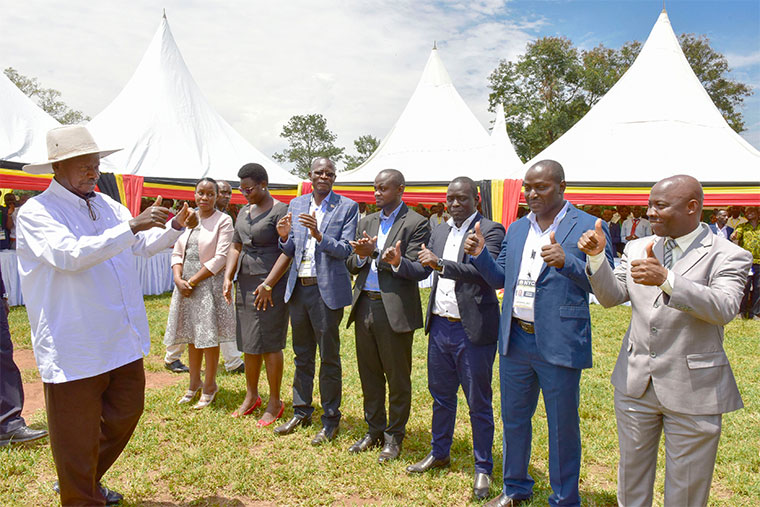 President Museveni has declined to give Shs 3.4 billion in cash to youth leaders as a reward for their support for him and his NRM party.

The over 342 youth leaders from different districts who had converged at Dams’ Water stadium in Jinja on Wednesday, asked Museveni to give them at least Shs 10 million each to foot their lodge expenses and also reward them for their efforts in supporting the NRM government for all these years.

Their request was presented by the national youth council secretary for finance, George Abdul, who informed the president that the youth needed the funds to transform their lives and also mobilize others to embrace the NRM government.

"Because these young people reported on the [August] 11th, they accumulated a number of expenses. It is unfortunate that some of them were being thrown out of the hotels because of the incapacitation that they can’t pay. They have been here, they graced the occasion. Now a request, that if you can support them in the different enterprises that they have now as leaders each of them with Shs 10 million. When you calculate this, your excellency, the budget is within the needs that can be supported. said Abdul.

Museveni however, informed the youth that, the act of dishing out money to individuals is an act of selfishness and misleading the youth. He advised them to form Savings and Credit Co-operative Societies (Saccos) that will benefit all youth.

"The money you're talking about - Shs 10 million per the leader who is here, please, I don’t want you to go to the [news]papers because it will spoil your name. Once I am telling you something, I am an authority on. That money I can make it available - Shs 3.4bn because that is what it means but not for you individually but for all youth leaders at the national level and other leaders who cannot fit in the local structure for some reason or another. If you take that, that one I agree with you. If you don’t accept that, then I can’t be a target for misleading that I came here to give youth money." said Museveni.

Museveni new stance on dishing out money is a sudden change of tactic because it had almost become the norm for the president to offer cash to youth groups purportedly for their empowerment.

Nevertheless, Museveni further pledged financial support to the youth council if they accept to form an all-inclusive youth Sacco.

"Shs 3.4bn is not a big problem or even more or even Shs 10bn, but the question is how, who and why? Please answer that. You have a leadership, you know you should also avoid anarchism you have a leadership which you elected, let them sit down and think. I also know how to tweet, I will be tweeting with you directly telling you that this one is poison." Museveni said.

A section of youth delegates who preferred anonymity for fear of repercussions disagreed with the president’s proposal. They argued that they are soon graduating from the youth age bracket and it will be hard for them to access financial aid from the state. Asuman Wandera, the youth council chairperson for Jinja central division says that registration of Saccos is time-consuming and not a viable solution of empowering the youth.

Wandera said the Busoga youth have supported Museveni for so long without getting anything in return, and that the president has started taking them for granted because when he is elsewhere in Uganda, he gives money directly and not through Saccos.

Museveni also urged the youth to improve on their social discipline by reducing their expenditure on luxuries, beer and big parties. He said Ugandan youth are fond of partying and merrymaking yet at the same time claiming they lack money.

"If you don’t have money, what money do you spend in bars? You go to bars and they are full, you go to where they are roasting pigs and the places are full...This is social indiscipline and it is part of the problem we are facing. We can start by being economically parsimonious. The government is ready to support youth who will form Saccos to engage in productive activities." said Museveni.

Love and support for a political leader comes from putting in place systems that guarantee sustainable development and can be audited effectively at the end of the day.

The act of dishing our sacks of money was criminally irresponsible and completely unsustainable!
Report to administrator
+1 #12 kabayekka 2019-08-16 18:47
One reckons gerrymandering in democratic elections world wide is a crime deserving a fine and disqualification.

If this economic dissatisfied youth have evidence against this political party about its political tactics of committing election crime they have all their citizens rights to take it to the courts of law! Otherwise they better go home and keep quiet.
Report to administrator
+1 #13 Kikonyogo 2019-08-16 19:55
Look at this Clown!! Uganda is plunged in Darkness!!

Wanainchi are Breathing and Eating Dust (Enfuufu)..Kampala has the Highest Contamination of Air after Peking..Sabalwaayni is Gloating about dishing out Money to Youth Bagule amandaazi!!!.

Where and in which country you have preelection acivities not funded.?

The parties get their budget and did you hear that Yoweri Kaguta Museveni is the Chairman of NRM? If you have not heard that then, I am telling you now!

How would you think to run campaigns without money? Problem here is not NRM campaign money which is legal, but how it was spent and where!!

As for Bobi Dingo Dog and Kizza Ezza they are getting huuuge money from foreigners to win elections.

Did you notice that some of them were caught and some media moguls expelled from Uganda.
Report to administrator
0 #16 Agaba.H 2019-08-17 13:36
Big shame for these youth who only think about themselvels.
Imagine these are future leaders.

Uganda still needs alot of prayers hypocrites allover the place.
Report to administrator
0 #17 rubangakene 2019-08-17 21:01
There is no more money, you just have to scratch dear earth to earn it.

Meanwhile The man is talking about Cooperatives when he is the one who destroyed that system. Did you know this same man was once a "lecturer" at Cooperative College, Moshi in Tanzania?
Report to administrator
12