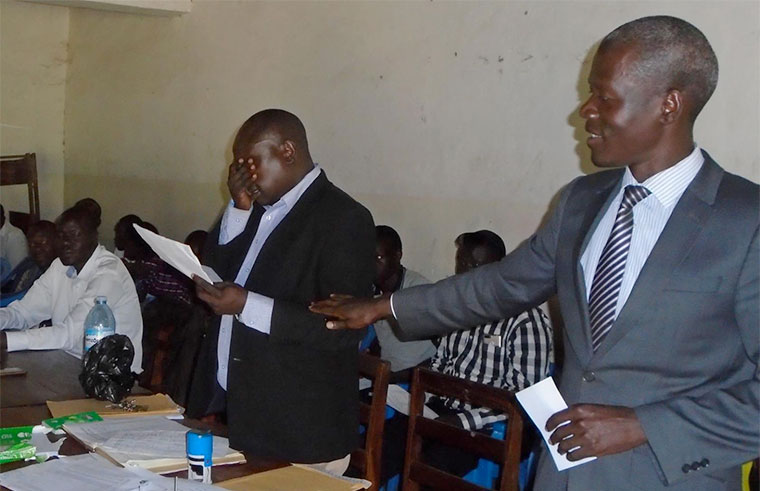 An emergency meeting called to resolve the impasse at Kitgum town college in Kitgum Municipality on Monday turned dramatic when the school head teacher broke down in tears while defending himself.

The meeting follows a students strike at the school on Friday last week. Senior four students went on rampage protesting the delayed issuance of the mock examination time table and the bad food served at the school.

In a heated meeting held on Monday in the school main hall, some of the aggrieved senior four and six candidates together with their parents blamed the strike on the poor leadership of the school head teacher, Michael Ocan.

They also allegedly paid Shs 100,000 each for a study tour in Entebbe last month. Ocan denied the accusations and broke down in tears while explaining how the school’s financial meltdown has cast him in the spotlight as a corrupt leader.

He explained that when he took over management a year ago, he found the school indebted in millions and unable to meet most of its obligations. He said the school had accumulated Shs 377 million in unpaid staff contributions to the National Social Security Fund (NSSF), income tax arrears with Uganda Revenue Authority (URA) and millions in debts to suppliers.

Ocan also noted that the money for the remedial lessons and holiday programs he was being accused of swindling, was in fact, paid through a select committee of teachers, adding that he never touched a single penny. He acknowledged the Shs 100,000 that students paid for the field trip, saying it was diverted to pay a loan at Centenary bank, which sparked outrage from parents and students.

Ocan said he was being blamed wrongly for sending students home yet their parents didn’t pay fees for the second term, a reason the time table came out late. Reports, he submitted during the meeting, revealed that 147 out of the 230 students in senior four hadn’t cleared fees - accounting for Shs 25.5 million. He instead blamed some teachers for instigating the students to strike.

The school director and acting Kitgum district education officer, Fred Owot admitted that the school has been battling financial difficulties but noted that it wasn’t right for students to meddle in the management of the institute. He said that he had forgiven the students for their conduct and 'false' judgment of the head teacher and warned them never to engage in strikes as a way of addressing their grievances.

Owot said they are doing everything possible to ensure that the students start sitting their mock examinations immediately. An assessment conducted by the school authorities puts the damage caused by students to the tune of Shs 68.5 million. The school management and parents are currently holding discussions to find ways of meeting the cost for the damaged properties.

At least 19 students arrested in connection to last week’s strike are still in custody at Kitgum central police station on charges of malicious damage to school property.

Kitgum & the entire Acholiland shouldn't worry; Museveni will affirm ownership of Uganda through next fake election & will directly decide!

Acholi tribal leader, elites, students, the sick, the non/ill educated, the poor that are so many, are waiting for Musveni to manage affaires in their rich land & serve them right?

Museveni will then have no trouble in bringing Chinese to Amuru to produce food that will be exported to feed Chinese!

Acholi shouldn' be impatient as Musveni will soon have full control of Uganda & directly handle matters for them while their land will be his base of operation!

It takes leadership for a people to organise, work, develop & Acholi proved Dr Obote was right, even when it was them keeping him in power, yet lack leadership to run their affaires quietly in peace!
Report to administrator