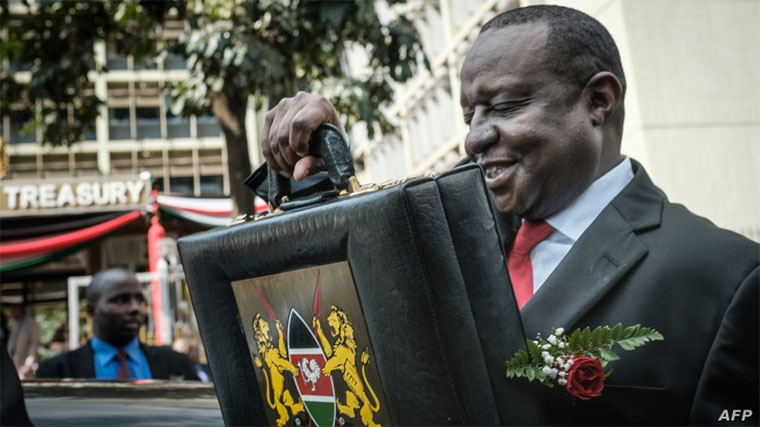 Kenya's Finance minister Henry Rotich and other treasury officials have been arrested Monday on corruption and fraud charges over a multi-million dollar project to build two mega dams, police said.

Director of Public Prosecutions Noordin Haji had ordered the arrest and prosecution of Rotich and 27 other top officials on charges of fraud, abuse of office and financial misconduct in the latest scandal to rock graft-wracked Kenya. Rotich, his principal secretary and the chief executive of Kenya's environmental authority then presented themselves to the police.

"They are in custody now awaiting to be taken to court," police chief George Kinoti told AFP.

"We are looking for (the) others and they will all go to court."

Haji said the conception, procurement and payment processes for the dam project -- part of a bid to improve water supply in the drought-prone country -- was "riddled with irregularities".

"Investigations established that government officials flouted all procurement rules and abused their oath of office to ensure the scheme went through," said Haji.

He pointed to the awarding of the contract to Italian firm CMC di Ravenna in a manner that he said flouted proper procurement procedures, and despite financial woes that forced the company into liquidation and had led to it failing complete three other mega-dam projects. According to the contract, the project was to cost a total of $450 million (401 million euros), but the treasury had increased this amount by $164 million "without regard to performance or works," said Haji.

Some $180 million has already been paid out, with little construction to show for it. Another $6 million was paid out for the resettlement of people living in areas that would be affected by the project, but there is no evidence of land being acquired for this, the chief prosecutor said.

"I am satisfied that economic crimes were committed and I have therefore approved their arrests and prosecutions," said Haji.

"The persons we are charging today were mandated with safeguarding our public interest and deliberately breached this trust.

"Under the guise of carrying out legitimate commercial transactions, colossal amounts were unjustifiably and illegally paid out through a well-choreographed scheme by government officers in collusion with private individuals and institutions."

Rotich has previously denied any wrongdoing in the scandal. The dams scandal is one of several in the poverty-plagued country that has seen hundreds of millions of dollars of public money disappear due to fraud. In 2017 Kenya fell to 143rd out of 180 countries in Transparency International's annual corruption index.

In March 2018, a damning report from the auditor general showed the government could not account for $400 million in public funds. A string of top officials have been charged since last year as President Uhuru Kenyatta vows to combat corruption -- a refrain weary Kenyans have heard from multiple presidents.

I hope Uganda can learn something, in Uganda, when top Government officials steal, they are left in the office and later promoted

Ugandans don't know what belonging to their country means: they are helping Museveni destroy & loot their land without opposing, just helping him teargas, harass, arrest & lock up thier own who defies or opposes the demon!

What Ugandans do to themselves, their country, while ensuring Museveni rules for life & the faminly business contines, beat the outside world!
Report to administrator
0 #12 Akot 2019-07-23 20:46
Mekkkk, agreed!

It's poor Kenyans who MUST come out on streets in UNITY to ASK/IMPLORE government they brought on with sacrifices becuse they wanted another Kenya that works for ALL, to give B. Obama Honorary Citizenship!

Kenyans cannot deny B. Obama is part of them by, consider him foreigner, yet expect help from other Americans who have no blood relation with them!

We MUST build our countries for those who reamin, our children, those who left, so that they & their kids can give real help!

Many Ugandans/Kenyans... living outside would be so so happy to help with Education, Agriculture..., if given the chance & considered part of countries they left, especially, especially 1 like B. Obama!
Report to administrator
+1 #13 Akot 2019-07-23 20:59
Nyam, thanks!

It's essential to have good governance with the people active in how their courty is run!

In corrupt Uganda, money belongs to Museveni while those in high public posts take advantage & take what they can to live much better!

Ugandans in posts, those who get hand outs from Museveni have become insensitive to their own poor because of complete lack of governance, yet it's Ugandans who ensure the status quo & no outsider will say a word against Museveni!
Report to administrator
0 #14 Akot 2019-07-23 21:08
Quoting Lakwena:

At least in Kenya there is an effort to fight corruption. But here in Ugandan, the corrupt are promoted and decorated with bloody medals.

Kenyans MUST not let the corrupt take them back to what they fought to get out of!

Ugandans are no where to a beginning to anything, so the corrupt, selfish, divisive govrnment will leave the country dry!

*When will Ugandans understand it's them who have the power, by bringing down the tribalistic system that locks them with Museveni, while locking the outside world OUT?
Report to administrator
0 #15 Akot 2019-07-23 21:11
Kirya,

I thought the same thing & was immediately ashamed, yet I still feel ebola could save Uganda!

Museveni is a virus that Ugandans MUST get rid of before they help him loot the country/destroy it completely!
Report to administrator
12