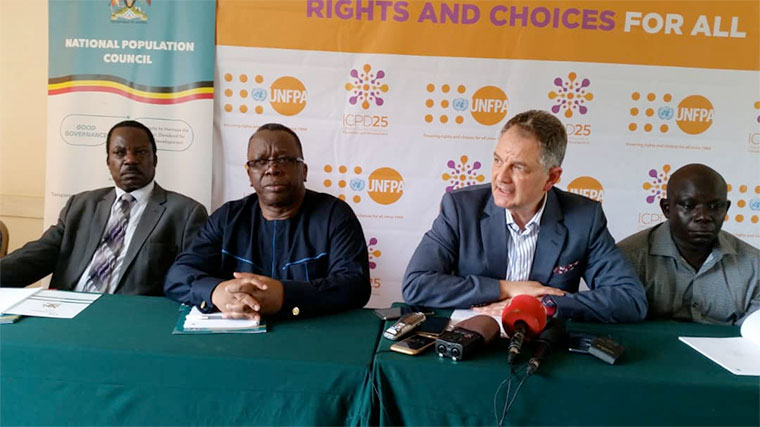 The officials addressing the media

Experts have warned that Uganda may not achieve the much desired middle income status with the continued poor implementation of development programs.

Addressing journalists ahead of this year's World Population Day on July 11, the chairperson of the National Population Council (NPC) Prof Fred Wabwire-Mangen said, while government has good program design, the desired goal of driving the population out of poverty may not be achieved because of the haphazard manner of implementing the programs.

"I must say, there are shortfalls in the implementation of programs like Skilling Uganda, Youth Livelihood Program  (YLP) and Operation Wealth Creation (OWC)," Prof Wabwire said.

"On paper, these programs are very good but the problem comes in when it comes to their implementation. The good designs remain on paper and what is implemented is different. You can't therefore think of improving the GDP when the programs intended to boost people's incomes are mishandled," he added.

This year's Uganda version of the day is commemorated in Adjumani district under the theme, "Renewing the Promise: Empowering Uganda's Youth to Drive Socio-Economic Transformation."

While the theme focuses on empowering the youth as an engine of the economy's growth to ensure Uganda's socio-economic transformation and realization of the vision 2040, Wabwire said, a lot needs to be done to get the nearly 78 per cent of Uganda's youthful population out of the dependency syndrome.

"Achieving sustainable development requires all sections of our population to make a contribution towards development but also benefit from that development," Wabwire said.

In designing OWC, YLP and skilling Uganda among other programs, government's intention to respond to the high unemployment levels among youths and the resultant high poverty levels especially among the under 30-year-olds.

Dr John Ssekamatte, a consultant with National Planning Authority (NPA) said, "We must meaningfully engage the population as a productive force if we are to achieve middle income."

The country representative of the United Nations Population Fund (UNFPA), Alain Sibenaler said that there is still hope that Uganda can benefit from the potential of the young population to fully reap the demographic dividend.

"At the heart of our efforts must be adequate investment in health and education with greater emphasis on the promotion of technical skills education, economic growth, jobs creation and governance," Sibenaler said.

Shame on Mr. M7 and his administration. Under this regime. I bet my chapati and Chai Mukalu because, under the Mr. M7 and his principle of dishonesty; it will take a miracle for Uganda to achieve the so call middle income status.

And now we have to wait for a "mzugu" to come and tell us we got it wrong after all. Just look at the man on the left of the mzungu and you have got your answer; no class at all, sitting like a houseboy with hands in between his legs. Oh Uganda, when will this shame end?
Report to administrator