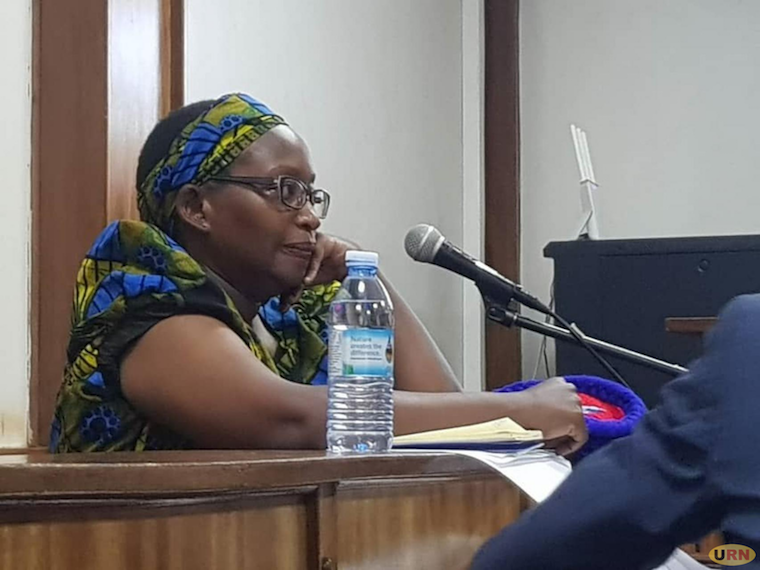 Incarcerated Makerere University researcher Dr Stella Nyanzi has asked court to adjourn her case for a month to allow her find witnesses willing to testify on her behalf.

Except for one, all the 19 witnesses that the defense had lined up failed to turn up in court on Tuesday and Wednesday. Nyanzi is charged with offensive communication and harassment, when in September 2018, she allegedly published a loutish birthday poem insulting and disturbing the peace and privacy of President Yoweri Museveni and his mother, the late Esteri Kokundeka.

She was arrested on November 22, 2018 and has since been on remand in Luzira prison after refusing to apply for bail. Through her lawyers, Isaac Semakadde and Derrick Bazekuketta, Nyanzi argued that since court has refused to compel the 20 witnesses the defense mentioned to court, the defense needed about a month to publish a notice in a newspaper of wide circulation and other media inviting willing witnesses.

Bazekuketta made the request while presenting his submission before the Buganda Road Grade One magistrate, Gladys Kamasanyu. He said the defense team will name willing witnesses within two weeks’ time. However, the prosecution team led by Timothy Amerit and Janet Kitimbo objected to the defense request for a month’s time to invite willing witnesses through news media.

Amerit noted that besides the defense trying to play delaying tactics so as to prolong the trial; it is alien in legal practice to advertise in search of witnesses. He said the defense request only shows that the accused doesn’t have witnesses and wants to go on a fishing expedition.

Prosecution prayed that the defense closes its case with final submissions or else court delivers it judgment. Amerit noted prosecution sees no justification for the adjournment given the reasons advanced by the defense, saying it will only bring disrepute to the court.

In its response, Semakadde, said it be would unfair for court to compel defense to close its case. He observed that whereas the prosecution had eight months to conduct investigations and the hearings, court gave the defense team only two days on July 3, 2019 to summon 20 witnesses and make submissions amidst scarce resources, which makes it unfair.

Nyanzi had mentioned 20 witnesses including President Museveni and asked court to summon them to give expert opinion in her case. Court ruled out summoning Museveni, saying as a sitting president he can't be summoned. When the other witnesses failed to show up, the defense was prompted to ask court through her lawyers to issue arrest warrants, a request that was rejected.

The defense also noted that although placing adverts in the newspapers to invite witnesses is unheard of, Nyanzi’s case would be the first. Kamasanyu adjourned the matter to July 15 to give her ruling.

Am not sure if any one would volunteer to testify im a case they have no idea about..
Report to administrator
+1 #2 kabayekka 2019-07-12 12:45
Indeed witness demand should be upheld and advertised. It will help the court in its deliberation to produce this controversial poem to the World Media so that the witness interested can get on the plane or trains to come to Uganda and defend the modern beauty of international communication that has befallen our planet earth.

Where in this modern communicative world one can now watch the moon and our planets in the sky on You tube with the best expensive telescope in the world.
Report to administrator
0 #3 kabayekka 2019-07-12 12:50
Please Mr Semakadde, can you make a print out of this poem so that many interested parties can read and understand it?

One wants to believe that this poem is not as yet banned in this country?
Report to administrator
+2 #4 Lakwena 2019-07-12 13:51
In other words, Dr. Stella Nyanzi is being martyred on the Alter of Mr. M7's Greed and Dictatorship.

E.g., backed by the Chief Priest, incompetent Rabbi and Pharisees; Jesus was martyred by the Herodian court because, he told them off that they were good for nothing, stiff-necked hypocrites and cursed them in Matt 23:1-14. Woe unto you ...
Report to administrator
+2 #5 Concerned Ugandan 2019-07-12 15:57
Sorry but there is no other way to put it. This is plain and simple mismanagement of Nyanzi's case by her lawyers.

It appears that they selected witnesses without ever meeting with the witnesses to confer about the case!

This is amateurish legal practice. How do you propose to court that an advert be placed for willing witnesses?? It is the responsibility of counsel to trace the witnesses beforehand!
Report to administrator
+3 #6 Wooden K. 2019-07-12 17:36
Ssebo Ssemakadde , you are wasting time for nothing .

We know the TRUTH . Nyanzi is a politcal prisoner , period ,

No expert is going be witness and legimitize a persecution that is openly disguised as a prosecution.
Your own wise ancestors lold you this " eyasuzeeyo , nebwakeera …"

For Lakweana and Co , this saying means ; if you have already( mistakenly/ wrongly) spent the night out , it matters less if you return home early

Nyanzi has already unfairlyand illegally been in prison for 9 months , let the Kamasanyu do whatever she wants with Nyanzi .

Lock her up in a bottle if that will please Museveni.
Report to administrator
+2 #7 Wooden K. 2019-07-12 17:52
Lakwena , there is no question that Nyanzi is in prison illegally . The tribalist system is sitting on her rights. Semakadde should stick on this point

They say that Nyanzi has been on remand for so long because SHE refused to apply for bail .

The Court can force or instruct the defence lawyer to "protect" their client. No suspect should stay in prison just because that is what the choose .

A competent Magistrate or a Judge can rule that a suspect be bailed out of custody even if he/ she has not applied for it.

No one is guilty until they are proven so , says the law . This means that no suspect can choose to say in jail because they are not interested in the options that the law provides for them

In USA , they even have the 5th Ammendment . A suspect can be exempted/ protected from incriminating themselves.
Report to administrator
0 #8 Akot 2019-07-13 20:29
kabayekka, agreed, but,

As long as Ugandans maintain the tribalistic system, no outsider, especially not UN-EU, will say a word against Museveni!

How canMuseveni who has no tribal land in the country terrorise Ugandans so & for 33++++++years?

Why is UNITY, if only to throw Museveni out, not coming, when after, tribal leaders can go back to their posts, but without Museveni around & tribes mind their business & make their triballands what they want?

Dr. Stella Nyanzi is being martyred on the Alter of Mr. M7's Greed and Dictatorship.

backed by the Chief Priest, incompetent Rabbi and Pharisees; Jesus was martyred by the Herodian court because, he told them off that they were good for nothing, stiff-necked hypocrites and cursed them Woe unto you...

Ugandans have no choice but to bring down the tribalistic system, if they still consider themselves HUMANS!

What Ugandans are doing to themselves to please Museveni is beyong common sense; so what's in Ugandans brains?
Report to administrator
0 #10 Zulu 2019-07-15 20:03
You are a fake newspaper. You only publish comments from yourselves/

Why did you refuse to publish my comments? Not once not twice
Report to administrator