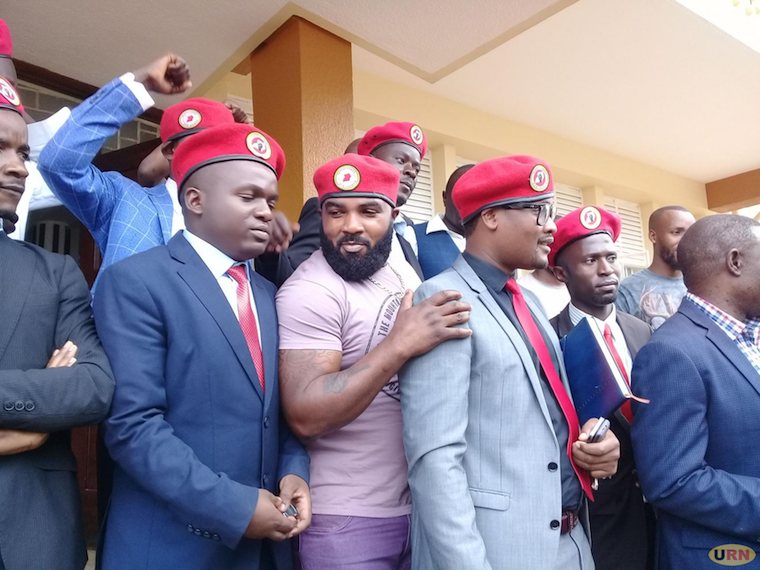 Some of the other suspects at court

Presiding magistrate Stella Kamasanyu also issued criminal summons to David Lule after the two failed to turn up in court on Wednesday for the second time. Kyagulanyi and four others; Julius Katongole, Nyanzi Fred Ssentamu, and Edward Ssebufu aka Eddie Mutwe are charged with disobedience of statutory duty.

The suspects allegedly held a public meeting in 2018 to protest against the introduction of the mobile money and social media tax, without notifying police contrary to provisions of the Public Order Management Act.

Prosecution led by Janet Kitimbo argued that the absence of the two was stalling the trial. Kyagulanyi's lawyer, Abdallah Kiwanuka told court that the two accused were travelling from up-country and could not make it on time.

"Our two clients have not been able to attend court because they have been traveling from a distant place but the next time and will be here to defend them." said Kiwanuka.

Prosecution told court that they had finalized with inquiries and were ready to for disclosure. Another lawyer Nalukoola Luyimbazi hopes that prosecution would share their evidence such that they can review it before hearing of the case resumes.

"State was previously directed to avail us with all the necessary documents and statements which they are intending to rely on in prosecuting this case. But by this morning, the same order had not been complied so in those circumstances the case could not take off. The case has been adjourned for some time till to 12th August."

+3 #1 WADADA roger 2019-07-12 08:07
No wonder Bobi has expressed desire to quit politics after 2021, pressure from courts is too much
Report to administrator
+2 #2 Zaitun 2019-07-12 18:52
Holding a public meeting, as far as I know, is not a criminal offence unless our learned Presiding magistrate Stella Kamasanyu and her learned friends have written a new law or developped a new interpretation to that effect.

These magistrates have found themselves so implicated in making easy money by corruption that they have now forgotten about interpretation and application of law in its absolute sense.

They should better be recalled to Law Development Center for further studies, otherwise they have become a disgrace and a nuissance to the country.

No wonder many a Ugandan doubt their academic backgrounds as well as their real intentions- like that of their master!
Report to administrator
0 #3 Akot 2019-07-14 19:20
WADADA roger, agreed.

UNITED peoples of Algeria/Sudan are without leadership, while Bobi is alone without UNITED people of Uganda - how can there be change of ruler in this situations?

Would Acholi have stood down without the rest of Uganda UNITED for Museveni?

Would Amin have been thrown out if Ugandans were tribalistically divided & ruled as with Museveni?

With such dark future & Museveni the only ruler, why has not even Acholi, formed Independent Tribal State instead of their tribal leader comfortably helping Museveni stay on?

Acholi was/is NOTHING since Museveni came on, yet they go along trembling thanking the demon for having killed them, made UN confine them in refugee camps & Acholi are waiting for Museveni to own & develop their land!

Why do Ugandans prefer Museveni to their own FREDOM to govern themselves as they wish?
Report to administrator
0 #4 Akot 2019-07-14 19:28
Zaitun, thanks.

Magistrates, police, army know Museveni will rule till he drops dead of old age & his military son will take over. So they are ensuring they are in good standing with the demon!

Yet, just tribal leaders standing/forced to stand down & UNITY of ALL will leave Museveni landless, not even State House will be home he can remain in!

How much longer are Ugandans going to keep Museveni on through the tribalistic system?