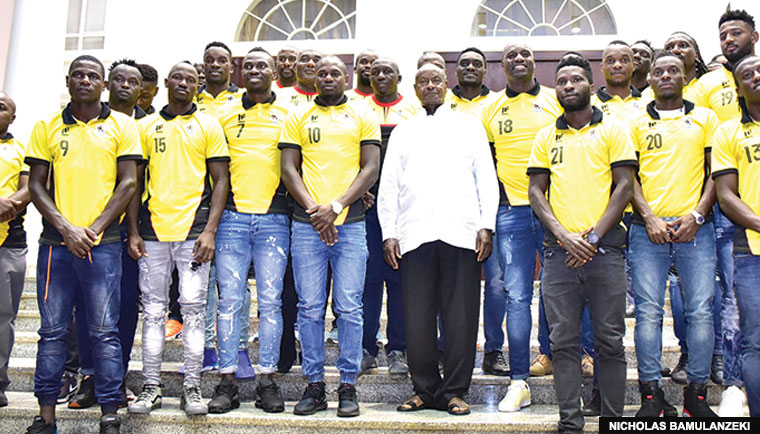 When the country was gripped last week with the unthinkable oddity of a national football players strike in the middle of Afcon, a continental football showpiece in Egypt, President Museveni, sources said, sent emissaries with a persuasive message.

To end the impasse that threatened our second round tie with Senegal, the president, through his emissaries, assured the Cranes players that he would pay all their bonuses when they returned to Kampala.

And indeed he met and spoke to them on Monday during a luncheon at State House, Entebbe. When they walked out of State House, the 42-man contingent of Uganda Cranes players, technical and support staff were assured they will share a whopping $1 million or Shs 3.7 billion from the president as a token of appreciation for their impressive performance at the continental tournament.

The Cranes bowed out of the event after losing 0-1 to Senegal in the second round. They had beaten DR Congo (2-0), drawn one-all with Zimbabwe and lost 0-2 to Egypt in the group stage.

In a veiled swipe at local football governing body, Fufa, the president at State House assured the players they will get the money (at least Shs 88 million each) in their bank accounts, and not through the national football federation.

Before playing Senegal last week, the players staged a sit-down strike, protesting what they called Fufa’s failure to pay their bonuses. The strike was called off after two days but Uganda’s image had already taken a battering. Through interviews with players, football and government officials, we managed to get a behind-the-scenes look at how the strike came about.

According to interviewed players who asked to speak anonymously for fear of reprisal action, the Cranes camp had for long been a ticking time bomb. During the 2017 Afcon qualifiers, Fufa president Moses Magogo reportedly pledged in the week of the ultimate game with Comoros that each player would get US$10,000 if they won and secured qualification.

And after the 1-0 victory over Comoros, Fufa didn’t deliver on that pledge, sources claim. Instead, according to sources, Magogo told players, then, that the money ($10,000) they received from State House (Museveni’s kitty to them) covered his earlier pledge. The players took it on the chin and lay low.

Then at the start of the 2019 Afcon qualifiers in June 2017, Fufa again promised a US$10,000 reward for each player if they qualified, according to one interviewed player. And again Fufa didn’t deliver.

But however, some players like team captain Denis Onyango received a winning bonus of at least $8000 (Shs 25 million). The bonus was for featuring in six qualifying games. Each player received $2,000 (Shs 7 million) for an away win; $1,500 for a home win and $500 for a draw at home.

In November last year, Museveni doled out another Shs 3.7 billion in cash awards to the Cranes for a good qualification campaign. Onyango distributed the money, and the least paid player bagged Shs 40 million.

But even with that cash package, the players remained unhappy going to Egypt. There was a hard feeling among players that Fufa always latched on State House’s goodwill cash to deny them their promised bonuses.

It is on that premise that the players felt cheated and grabbed the ideal moment to strike back at a very critical moment during the Afcon finals in Egypt. Before the tournament started, the players signed a code of conduct, in which they were offered bonuses; $4,000 and $2,000 for a win and draw respectively during the group stages.

So, after the group ‘A’ fixtures, they were owed $6,000. While the players waited for the aforementioned sum to be cleared, another problem came up. The players expected that qualification to the round-of-16 would earn them US$5,000.

Instead, Fufa said that the $5,000 would only be paid if they beat Senegal, quite an uphill task. The players accused Fufa of going back on the agreement. According to players, the $5,000 was supposed to be a reward for making it out of the group phase.

Could it have been a misinterpretation on the part of the players? In a statement posted on its website, Fufa said each player would receive $5,000 after winning the round-of-16 tie with Senegal.

With such escalating tensions, a player mutiny was inevitable. And for the players, there was no better timing for their labour action than the run up to the Senegal tie to force Fufa’s hand given the pile of enthusiasm in the team’s potential.

Considering, that before Afcon, Fufa received over Shs 4 billion to cater for all logistics related to Uganda’s camp from government, this would not paint them in good light, especially as far as his Excellency was concerned.

In fact, at the time, when all players resolved to hang up their boots, the State Minister of Sports Charles Bakkabulindi, and other top government officials intervened at the urging of President Museveni.

Sources said the Head of State sent a message through his emissaries to the players’ camp, assuring them that he would sort them out with a big kitty upon their return from Afcon. But, in the same breath, he reportedly urged them to return to the training ground, and prepare for Senegal.

Apparently, upon hearing that assuring message from State House, the players ended their strike. And fittingly so, the President came good on his pledge. But before the players met the president on Monday, Fufa paid them $6,000 before they went for the State dinner. That is on top of the earlier bonus of $6,000 paid for the win and draw against DR Congo and Zimbabwe respectively.

That said, Fufa spokesman Ahmed Hussein said there is a misconception among our players.

“When Fufa promises to reward them for qualification, we do that in anticipation of the money coming from government to support our activities,” he said.

He added that whenever Magogo made a pledge, it was hinged on government funding. Asked why State House chooses to pay the president’s cash directly to the players’ accounts and not through Fufa, Hussein said that is the prerogative of the Head of State.

They lost to Senegal , lost to Egypr , drew with Zimbabwe and beat Congo.
That is only one win

How then can one continue to write that theirs was an "impressive performance" !!!! ???

Of course . Museveni has become so weak that any fool can manipulate and black-mail him.

This is a sad story
Report to administrator
+3 #2 WADADA roger 2019-07-11 00:20
The strike was inevitable, the cranes knew that they would not progress beyond that stage and the couch must have warned them of his intended departure and there was fear that their money was already and used
Report to administrator
0 #3 The Ugandan... 2019-07-11 23:19
FUFA should not make any more promises based on statehouse funding!

They should have MOU with each player and stick to it.

As limited in talent as this team is, they still could have beaten Senegal if they were focused and won more money in the end.

Opponents could even have sowed this seed of dissatisfaction in the team and the clueless players gobbled it up.

When you play at a high level you should be aware of such shenanigans to sabotage you at every level.

FUFA should pay the players what they promised them, on time, otherwise, don't make the promises in order to avoid such scenarios.
Report to administrator