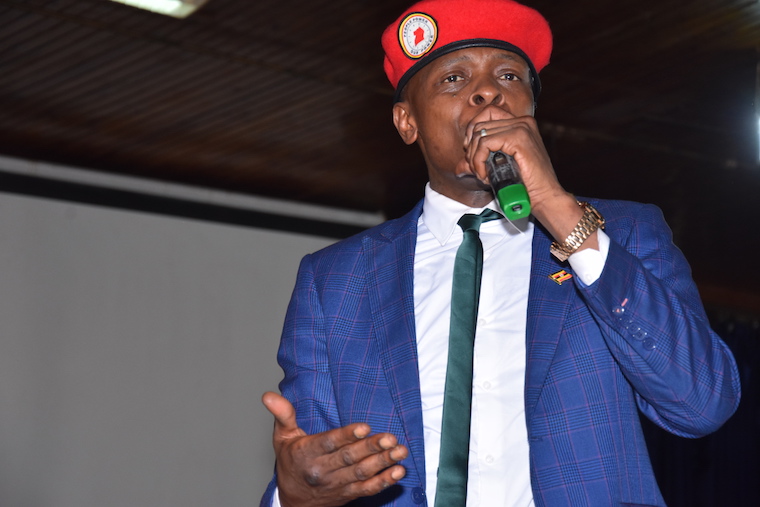 Before an ecstatic crowd on July 3, singer Joseph Mayanja better known as Jose Chameleone was formally inducted into the Democratic Party (DP) at the Youth Sharing Hall Nsambya in the capital Kampala.

Chameleone joined Uganda’s oldest political party with his brothers; Pius Mayanja aka Pallaso and Douglas Mayanja (Weasel). Mayanja joined DP to promote his 2021 Kampala mayorship ambitions but to the DP leadership, they see a magical wand in Chameleone, which can be put to good use in attracting the much-needed support for the party.

Immediately he signed on to the dummy membership card, DP president-general Norbert Mao declared Mayanja the party’s chief mobiliser. “My goal is to make the party more attractive,” Mao told The Observer.

“Musicians are a very good way of packaging a party, this is a global phenomenon; I saw Alicia Keys with Hillary Clinton, Kanye West with Donald Trump because the world has become so dynamic,” the DP leader said of Mayanja who weeks before July 3 had declared he would run for mayor of Kampala as an independent candidate.

As a chief mobiliser, Mao said, Mayanja will work directly under the office of the DP president-general to spearhead a countrywide massive recruitment of party supporters but with special focus on Kampala.

“We realised that we have to reach out to certain musicians and make sure they become part of our mobilisation strategy,” Mao said. The success of last week’s event at Nsambya gave Mao confidence that the strategy might work for the opposition party and is already thinking of a supporters recruitment slogan that goes, “Be like Chameleone, be part of DP.”

The Nsambya event was skipped by DP MPs except for Joseph Ssewungu. (Kalungu West) and Florence Namayanja (Bukoto East). Apparently, some of the MPs don’t believe Mayanja is a good catch for the party.

“You can’t give somebody the role of a chief mobiliser when he himself is not well mobilised,” a DP MP who declined to be named said.

Some members in the party are wondering why Mao rushed to appoint Mayanja as chief mobiliser but has persistently defied calls to fill many vacant positions on the party’s national executive committee.

Since the death of Mathias Nsubuga Birekeraawo (Secretary General), Issa Kikungwe (National Treasurer), Susan Namaganda (deputy national women leader) and the defection to NRM of Muhammad Baswali Kezaala (National chairman), none of their positions has been filled.

Mao, however, told The Observer that Mayanja’s appointment was discussed and approved by the party organs.

“He is not the first person I have appointed to the position; previously I had Ali Mulyanyama [Mayor, Makindye division] who I authorised to go to the radios to speak for the party. Other party officials have their constitutional duties yet a chief mobiliser is like on special operation,” Mao said.

But Mayanja has to do more to shake off his past ties with the ruling NRM. Some in DP view him as an NRM mole. At his induction in Nsambya, some in the audience tried to loudly remind the singer about his active role in the 2016 President Museveni re-election campaign song titled Tubonga Nawe.

A humbled Mayanja knelt down and offered an apology.

“I have never been an NRM supporter, I was hired as a musician to offer a service just like the other service providers but I want to apologise for having joined Museveni’s campaign in 2016; it is time now for us to work together and take the struggle forward,” the musician said.

Earlier speakers like Ssewungu had tried to convince the audience to forget Mayanja’s past and focus on how they can push DP’s agenda forward.

“Recruitment is about getting new members, you don’t recruit from within, we are targeting those in NRM – people like Justine Kasule Lumumba (NRM secretary general), Tanga Odoi (NRM Electoral Commission chairman), Ofwono Opondo (executive director of Uganda Media Centre) and others. Chameleone is a big brand, we should be celebrating his coming because he is going to get us more members,” the Kalungu West MP said.

Mayanja’s arrival at Nsambya in the company of singer Eddie Yawe, an elder brother to Kyadondo East MP Robert Kyagulanyi (Bobi Wine) did little to convince skeptics who hold a view that he is part of a government project to create a new force to neutralize the Kyagulanyi-led People Power’s rising influence.

Mayanja wore the People Power movement red beret and consistently told the audience that he was fully behind Kyagulanyi’s presidential bid.

“I support Bobi Wine 100%, we had our fights as young musicians but we have since grown into responsible adults; he is my brother and we move along well,” Mayanja said.

Mayanja declared his alignment with Uganda’s oldest political party during its reunion meeting in Jinja last month as he also launched his aspirations for the Kampala Lord Mayoral seat.

By DP giving him a soft landing, some view it as part of Mao’s plan to dispossess his nemesis, the current Kampala lord mayor Erias Lukwago. Mao, however, says he is not fighting Lukwago. He also hit back at critics of his marriage to Mayanja.

“I have been opposing Museveni from day one; I come from a place which has suffered most at the hands of Museveni. Those people you call opposition; Col Kizza Besigye [FDC] was part of the army, which slaughtered our people, the same with Gen Mugisha Muntu [of the Alliance for National Transformation]. So, nobody can lecture me on how to be opposition, that nonsense I will not tolerate,” Mao said.

Also at Nsambya was former Mukono South MP Rev Peter Bakaluba Mukasa who said that he decision to quit the ruling party followed the 2017 amendment of the constitution to remove presidential age limits.

0 #1 Ugthinker 2019-07-10 09:39
By now any Ugandan of sound mind knows who Norbert Mao is. Any one going into alliance with him therefore must be in agreement with Mao’s line of chameleon politics!

They don't stick to one position and defend it for example. Chameleon is looking for food. The other day he knelt B4 kaguta. What a joke.
Report to administrator
0 #3 PaulK 2019-07-11 07:36
Chameleon cannot fool us. He is an NRM mole. There are credible allegations that the house he bought in US was part for he deal.