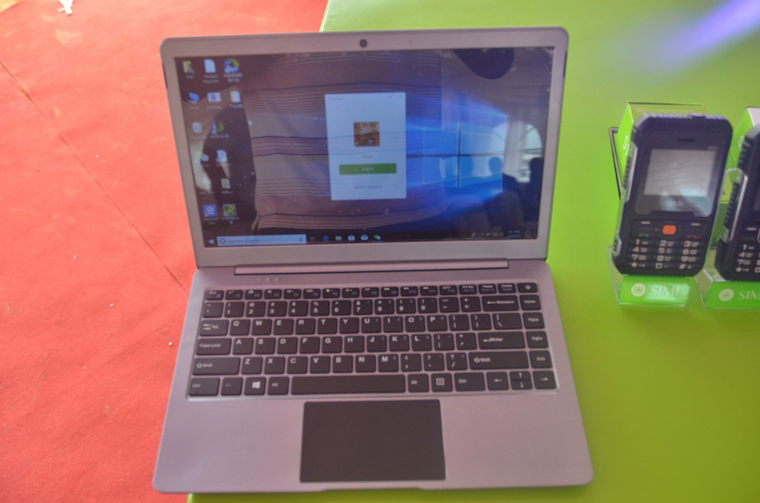 The Simi laptop that are set to be assembled in Uganda

The firm is setting up its plant in Namanve, Uganda’s flagship industrial park. The construction works expected to last six months commenced this morning with a groundbreaking ceremony presided over by state minister for Investment Evelyn Anite and the minister of Information, Communication and Technology (ICT) Frank Tumwebaze.

Ares Chow Yu Qing, the executive director ENGO Holdings Limited says the firm will unveil the first generation of products manufactured and assembled from the plant to the market before close of 2019.

Yu says the plant will rely on Chinese imported motherboards, screens, touch panels, batteries, cameras and speaker receivers and vibrators as well as circuits for the domestic manufacture of the phones until qualified workers have been trained to undertake the commercial process from Uganda.

According to Yu, the firm will invest $15 million (approx. Shs 55.6 billion) over five years to increase the production capacity from initial 1 million mobile phone gadgets a year to its maximum. The firm’s trademark is known as Simi Mobile and will produce both cheap analogue and smartphones.

Yu says “We will do this step by step. We will use experienced Ethiopians until we have trained our own workforce. So we will start will 100,000 gadgets per month. For computers, the target computers is one million a year – depending on demands. But we will bring more machines if the demands are high.”

Dr Emily Kugonza, the chairman of the board of Uganda Investment Authority (UIA) says he is confident the company will revolutionize the ICT sector in Uganda. He said the development is coming at a time when Africa is the next frontier of development.

"We wish to congratulate ENGO Holdings for this great milestone. I got the opportunity of visiting your assembly plant in Ethiopia and I got convinced that you’re the right people to come to Uganda and help us take off in the ICT sector the way we’re witnessing today." Kugonza said.

Tumwebaze said the development is a huge milestone for the country. He urged the franchise to explore the use of Uganda’s manufactured software in their manufacturing value chain. Minister Anite said it is wonderful that Uganda will reduce on its import bills on computers and mobile phones.

"It is such wonderful news that for the first time we’re not going to be importing these computers from China, from Europe, from allover the world. We’ll be buying them from Namanve industrial park. What a wonderful news. It is very expensive to import these computers because it increases on our import bill but also by having them here it is going to increase our export bill because they are going to manufacture them here not only for the Ugandan population but also for the neighbouring countries." Anite said.

Anite says some of the gadgets will come with self-charging solar units making them ideal for rural communities.

"We still have issues of blackouts which were still working hard to ensure it is solved, but now to have a solar powered mobile phone, that is good news for the people in the villages like Koboko…I will not now have to struggle to go and power my phone in the trading centre, I will just wait to power my phone by putting it under the sun. " she added.

"In the past year, there has been an increase in the national budget expenditure allocation by 43% from Shs 104bn in 2017/18 to Shs 146bn in 2019/20. A significant allocation of the ICT budget is spent on imported ICT goods such as software and hardware. This is why the commencement of this factory will give Ugandans an opportunity to replace foreign software and hardware with local innovations thereby spurring development." said Ssaka.

According to NITA, there are 22 million mobile phone subscribers in Uganda. It says the sector is growing at 27 per cent per annum.

+2 #1 Karemire 2019-07-05 00:50
I welcome this development and I hope that fellow Ugandans will realize tat the important thing in this (in the long-term) is NOT the "products" out of the Chines factory BUT the flow of industrial knowledge (& skills) from the Chinese to Ugandans.
Report to administrator
+1 #2 kabayekka 2019-07-05 08:40
One remembers well that picture around 1990s when the NRM leadership held a mobile phone to the public as the new technology that was being imported into Uganda.

29 years ago, that is when this Simi electronics factory should have been constructed with the help of UTL.

Now one can only watch out how the Uganda Revenue Authority TV import policies are working out so that only the rich can afford a digital TV in their house in this country!
Report to administrator
+2 #3 Jamori jude 2019-07-05 13:48
In fact we r much ashamed by our leaders instead of empowering Ugandans to advance in technological activities you are busy empowering foreigners to expand their companies.

This will only hold back the Ugandan knowledge base as a country. Please we as Ugandans together with the government can create a knowledge based economy for our country. We as Ugandans we need to start producing what we consume.
Report to administrator
0 #4 Kelly 2019-07-05 15:29
I don’t know why the pessimism in me doesn’t believe this is real. May be it is because of my so many years of being hoodwinked by these NRM cabals (read M7-Kutesa-Muhwezi trident) that I have become vexed in believing whatever they say or do.

Haven’t we just heard of a certain Nigerian firm, Taleology Holdings GIB Ltd that “bought” UTL for Ush260 billion, Anite ululating as usual and just 9 months down the road here we are with UTL!

Who still remembers Kananathan-yes, he of the AGOA fame and our AGOA girls; given that vast land and building at Coffee (Bugolobi) plus a bounty of USD $6M? (I believe Kananathan was just a red herring).

How about Kingdom hotel, AYA hotel that were all meant for CHOGM in 2007 and just being completed now? Anyone still remembers OPEC Prime and Nakawa-Naguru debacle?
Report to administrator