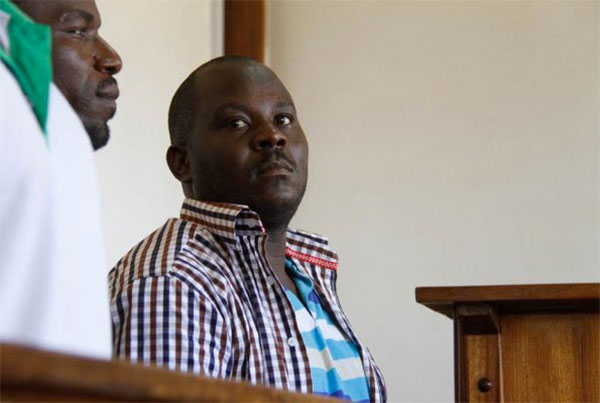 A humbled Muhammad Ssebuwufu together with his gang of seven were on Monday found guilty of murder.. DERRICK KIYONGA breaks down how the notorious car dealer was brought to his knees.

By the time the 26 prosecution witnesses assembled to pin Ssebuwufu were through with their testimonies, the media attention had diminished. The trial had dragged on for far too long and the witnesses, who were mainly policemen, were considered not newsworthy.

The latter parts of the trial had largely been ignored by both the media and the public and Ssebuwufu seemed confident he would walk free. He had hired two of the best criminal lawyers in town: Caleb Alaka and Evans Ochieng. What could go wrong? The high-profile trial got underway on February, 28, 2018 after stalling for two years.

In the initial stages, the director of public prosecutions Mike Chibita, was determined to pursue Baguma as an accused. Chibita through various dossiers leaked to the media, insisted he had evidence to tie Baguma and Ssebuwufu to the murder. But when the elusive police officer finally capitulated, appeared before a lower court, and later was committed to the High court for trial, the DPP developed cold feet.

Once Baguma was let off the hook, the public interpreted that as another doomed trial; the big fish would ultimately be exonerated. There were many theories argued to support why Baguma should have remained on the charged sheet.

He was the boss of the Kampala Central Police Station (CPS), which is a stone’s throw away from the Pine car bond, owned by Ssebuwufu, where Katusabe met her death. It was suggested that Baguma had covered up for Ssebuwufu.

But nonetheless, Justice Flavia Anglin Senoga had no option but to discharge Baguma at the urging of the DPP and remained with Ssebuwufu and seven others.

They were represented by Peter Tumusiime, a legal assistant at the law firm. In his testimony, he recounted how he came to know that Ssebuwufu was superintending over Katusabe’s torture and eventual murder.

In the August of 2015, Tumusiime said his boss Annet Kobusingye dispatched him to Ssebuwufu’s Pine car bond to find out if indeed their client Katusabe had been kidnapped and tortured from there. Ssebuwufu accused Katusabe of purchasing a car and failing to clear a balance of Shs 9 million.

When he reached Amamu house, now renamed Georgian house, which is near Pine Car bond, Tumusiime said he called Katusabe’s phone. “She picked and subsequently confirmed that she was “still in the custody of my kidnappers,” Tumusiime said.

Following this brief communication with Katusabe, Tumusiime said he dashed to the car bond.
Tumusiime said he found many people gathered outside including Ssebuwufu who he asked where Katusabe was. A flamboyant Ssebuwufu apparently led Tumusiime to a certain room within a house at Pine.

Here, Tumusiime found Katusabe barefoot, alive, but fragile and with many bruises allover her body.

“She appeared to be so weak and bruised,” Tumusiime said, adding that the deceased was surrounded by approximately seven beefy men commonly known as ‘kanyama.’

According to Tumusiime, Katusabe told him that she had been kidnapped from her home. Katusabe’s story was cut short by Ssebuwufu who kicked her all over the body, Tumusiime said.

“He kicked her in the breasts,” Tumusiime explained, “…and later instructed the other men to start kicking her too, which they did.”

Taken aback by the ugly sight, Tumusiime asked Ssebuwufu to explain why he was battering Katusabe. “Ssebuwufu told me he had sold Katusabe a car but she hadn’t completed the balance,” Tumusiime said.

As prosecution witnesses continued to pin Ssebuwufu, his lawyers Alaka and Ochieng tried to buy time by asking for numerous inexplicable adjournments.

They not only succeeded in unsettling the trial judge with the persistent demands for adjournments but they also angered Ssebuwufu’s co-accused who were on remand. Stephen Lwanga, who got off lightly for being an accessory to the murder, didn’t buy into the strategy of seeking adjournments. During one of the many court sessions, he dramatically told a poorly attended court that the adjournments were prolonging his suffering.

He insisted he wanted this trial to end quickly since he is an HIV sufferer. Taken aback by Lwanga’s outspokenness in court, Alaka and Ochieng asked the judge to talk privately with the ailing prisoner.

Though police officers were accused of trying to bungle up the case, the evidence of Francis Amanzuruka, an Assistant Superintendent of Police, proved crucial to Justice Senoga’s judgment.

Amanzuruka said that on October 21, 2015, he received a phone call from one Mugabi, the officer- in- Charge (O/C) of Central Police Station (CPS).

Mugabi told Amanzuruka to go to pine (Car bond). Before he left, Mugabi first asked Amanzuruka if he knew the place called “pine”.  “I told him [Mugabi] that the only pine I know is the tree,” Amanzuruka said sending court goers into a bout of laughter.

Mugabi told Amanzuruka that pine was a Car bond and apparently he wanted him to rescue a woman who had been held hostage therein. Upon reaching pine, Amanzuruka said, he found a group of people standing near the cars including Ssebuwufu who introduced himself as the owner of the place.

The police officer said that as soon as he arrived, another man dressed in a black suit also arrived. Introducing himself as Katusabe’s lawyer, Amanzuruka said the man who he later came to know as Amon, brandished his Identity card, which had his photo and law firm name. But this, Amanzuruka said, didn’t sway Ssebuwufu and company who reacted by telling the man to get lost since they weren’t ready to let him see Katusabe.

Ssebuwufu, he said, called out loudly to someone nicknamed “Golola” who was holed up in another house at Pine. Amanzuruka said two “Gololas” who were both tall and beefy emerged from the house.

“I don’t want this man here [pointing to Katusabe’s lawyer],” Ssebuwufu barked orders to the two beefy men, according to Amanzuruka. As Ssebuwufu’s men were getting ready to physically drag Amon off the premises, Amanzuruka said, he intervened and told them that all they wanted was to see Katusabe. Ssebuwufu, Amanzuruka said, mellowed and allowed them in but sent his henchmen to monitor what they were doing. Inside the house, he said, they found Katusabe in a chair looking weak and out of shape.

“She was very dirty, her body had soil, she had swollen hands, and was barefoot,” Amanzuruka recalled. Amanzuruka said he asked Katusabe if at all she had been beaten but the businesswoman kept quiet. He   asked her again if she had been battered and she said “yes.” But she declined to pinpoint who had beaten her when asked.

Outside, he said “the Gololas grabbed Katusabe’s lawyer by the waist and neck in an apparent attempt to drag him out of the place as Ssebuwufu had explicitly ordered.

Still for the umpteenth time Amanzuruka saved the lawyer from the angry men by telling them “stop it.” He asked to take Katusabe out of the car bond. While outside, Amanzuruka said he asked Ssebwufu what exactly had happened to Katusabe since she was clearly in a sorry state.

“He [Ssebuwufu] told me the woman is drunk,” Amanzuruka said, “He said she had taken too much waragi. Afande [Amanzuruka] can’t you smell alcohol. That’s waragi.”

Amanzuruka said that after much haggling and pleading, Ssebuwufu gave the policemen a Toyota Premio which they used to take a weak Katusabe to CPS, Kampala.

He said on reaching the police station, the driver of the car, who was Ssebuwufu’s employee, refused to enter the gate.   According to Amanzuruka, this forced him and another police officer to get out, purposely to seek for reinforcements.

As soon as they were out of the car, he said, Ssebuwufu’s driver drove off with Katusabe still in the car. Later that day, with the help of a police truck, they went back to Pine and retrieved Katusabe whom they found in a car park in the Pine court yard. Amanzuruka said that though Katusabe was rushed to the national referral hospital Mulago, he learnt on October, 23, 2015, that she had passed away.

Ask the Kadogos whom Mr. M7 turned into organized killers/murderer, during his carnage in Luweero and thereafter in Northern Uganda.

These are haunted souls. It would have been better if they were not born.
Report to administrator
+1 #4 Lakwena 2019-06-26 14:44
I am sure Katusabe was not the first and last victim of Ssebuwufu Mobster. Before they tortured Katusabe unto death (masters of violence), they might have practiced and done it to many other Ugandans.

In other words, the Ssebuwufu of this country adopted and inherited the art of terror, torture, extortion and killing from the Masters of Violence: Gen M7 and Gen Kayihura of this cursed country.

They became rich not from honest hard work and saving, but thru lies deception, intimidation, murder grabbing (booty and pariah capitalism) vandalism and terrorism.

But because they have caused so much suffering to millions of Ugandans, curse be unto them and their families too.
Report to administrator
+1 #5 Karemire 2019-06-27 00:29
Quoting zzungulu zungulu:

May revenge be left to the mighty God, her death will not be in vain!

They all deserve the maximum penalty, and failing that, each (excluding their boss) should get "one Ug expected life span" in jail at the minimum.

Their boss' fate should have Zero degree of freedom - only DEATH by hanging can do justice.
Report to administrator
+1 #6 WADADA roger 2019-06-27 13:32
I hear.................But nonetheless, Justice Flavia Anglin Senoga had no option but to discharge Baguma at the urging of the DPP and remained with Ssebuwufu and seven others.................." Some animals are more equal and indeed that is what happened.
Report to administrator
0 #7 WADADA roger 2019-06-27 13:35
Be that as it may, be rest assured that Sebuwufu will soon bounce back on bail pending appeal while the others will wait longer, the appeal will overturn both the sentence and the conviction and these guys will be let off the hook or they will find somebody to sacrifice but not Sebuwufu.

The High Court judgment is intended to please the General public that was now looking at the Courts as conduits of injustice
Report to administrator
+1 #8 fkyyyyyy 2019-06-27 13:37
They should be thrown to hungry lions.

That is exactly what they put Katusabe through. She was entirely defenceless against these goons. May their souls burn in hell.
Report to administrator
0 #9 WADADA roger 2019-06-27 13:42
The actual truth has been hidden from the public, those who are going to heaven may have a chance of watching the real video
Report to administrator
0 #10 kabayekka 2019-06-27 14:39
Interesting indeed that the citizens of the religion of Islam are culprits in many of the atrocities being committed by the so called born again Christians of Uganda that are in government leadership.

Many African Christians are very much in the habit of faith to blame muslim believers as the worst in committing sin on our planet earth.
Report to administrator