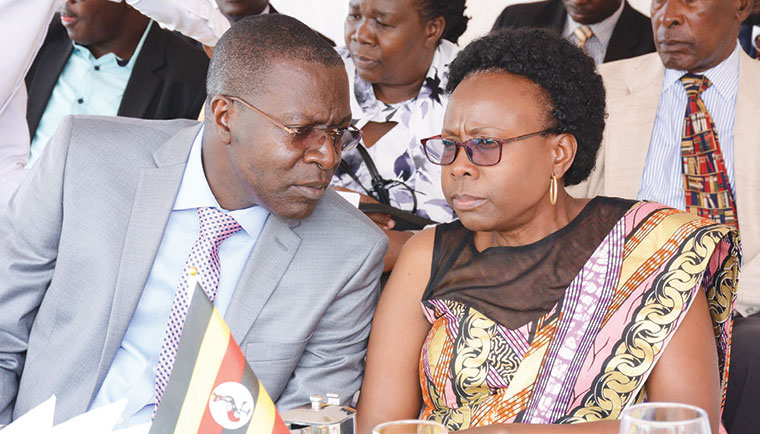 Dr Medard Bitekyerezo has been board chairman for National Drug Authority since February 2017.

He is happy about developments he has brought about and achievements made so far. Among a long litany is purchase of 15 new double-cabin pickup vehicles to traverse the country; setting aside Shs 30 billion for construction of a new 10-floor building to house state-of-the art laboratory complex in Kampala and procuring a contractor; and training board members in management issues.  The laboratory will be popularly known as the NDA Towers.

Bitekyerezo told The Observer on Monday that this laboratory complex will change everything in the country. “We will send our staff abroad to train to handle sophisticated equipment.”

“I decided as chairman that the lab should be put up first, not office headquarters. This was a reversal of decisions of earlier boards. In fact, second to be done will be construction of seven regional offices with wonderful storage and mini laboratory facilities, before we can think of building national office headquarters with air conditioner,” he emphasized.

Other feats the chairman mentions include improvement of communication with the mother ministry, improvement of relationship between the authority and the pharmaceutical industry and with all other stakeholders, putting up a streamlined organogram and polishing the human resource manual, and opening up a food desk at NDA in preparation for future expanded mandate of the authority.

Bitekyerezo is pleased that the directorate of enforcement has been strengthened to the extent of employing people trained in law and police work, pharmacists and veterinary doctors to boost drug regulation. The directorate works 24 hours a day “because thieves prefer to do their work during night”. The authority has recruited more veterinary doctors into its systems to close the gap regarding veterinary drugs.

The National Drug Authority does not get any financial allocation from government, not even for its staff salaries. Bitekyerezo said their entire budget is funded by their legal sources of revenue. He said the authority recently put up Shs I billion that was used to incinerate a lot of expired drugs that health facilities were stranded with.

“We have incinerated 910 tonnes of expired drugs in the last two years. We moved 20 lorries of expired rugs from one hospital in Kampala that I am not ready to disclose.” He blamed the problem of expired drugs largely on various donors who give drugs with a short shelf life.

On the long 25-year journey of the authority, the chairman said it’s a wonderful landmark that NDA, as a government body, had evolved from nowhere into one of the most recognized drug authorities in Africa, with many global certificates of accolades. Whereas before creation of NDA drugs just entered the country like any other commodity, today there is a strict regimen of inspection and certification in place, and this saves people from several risks.

However, Bitekyerezo is bitter with some government employees that smuggle drugs, vaccines and equipment from the country. “There is no gainsaying that this government buys a lot of drugs, but some few people with bad hearts are smuggling them out. Our 26th year is going to make the stealing of drugs very risky business. It is going to be a year of serious vigilance, to see that drugs coming or made in Uganda are used properly.”

He pledged that encouragement of investment in local pharmaceutical industry is going to be heightened. He said NDA already sticks to the policy of Buy Uganda, Build Uganda (BUBU); while it charges a tax of 12 per cent on drugs from outside the country, the same drug manufactured here is taxed at only two per cent.

He pledged that once the national airline (Uganda Airlines) is operational, he will lobby the board to pass policy that its staff on foreign duty always uses the national airline. He explained that delays in certifying or licensing drugs and medical devices is neither deliberate nor accidental, but necessitated by the rigours of good manufacturing practice (GMP) inspection, verification of dossiers on clinical trials and other factors.

He said NDA in conjunction with Uganda Revenue Authority regulates all medical devices in the country as a form of helping the government although the act setting up NDA did not mention that duty.

“We also have a window for co-opting experts in different technologies to be on our boards or teams,” he added.

He pinpointed the challenge of counterfeit drugs which he said is not limited to Uganda but global. He said vigilance against counterfeits must be heightened to protect the health of our people and animals.

+1 #1 Mubiru 2019-06-26 15:15
The investigating tv journalist (Serwanja) who with his wife who happens to work for the health ministry narrowly escaped imprisonment for their diligent research in exposing the vagabonds who steal drugs.

In fact the man was mistreated as a suspect instead of giving him and his wife all the due credit they deserved for risking exposing the scam.

We are now told that NDA is going to make stealing drags a risky business. What a contradiction.?

What happened to those caught red handed with stolen govt drugs as the images filmed by the producers of the programme Serwanja introduced were clearly visible on the screens ?NDA must tell us what happened to the thieves before promising us "air" as if we are all idiots.
Report to administrator