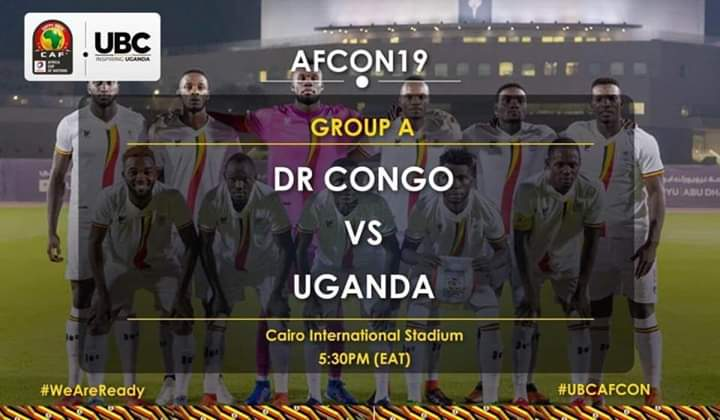 UBC broadcast the games only for 3 days

The national broadcaster, Uganda Broadcasting Corporation (UBC) is negotiating with the Confederation of African Football (CAF) to broadcast the 2019 African Cup of Nations (AFCON) tournament on credit.

The tournament, currently being held in Egypt, began on Friday last week and UBC was able to broadcast the games for the first three days before it suddenly stopped.

In a statement, UBC said it had temporarily stopped the broadcast and that the matter would be resolved soon. URN has since established that UBC began broadcasting the tournament under the assumption that government would release the money for the broadcast rights.

UBC, which has been struggling to secure the AFCON broadcasting rights, recently wrote to parliament seeking Shs 1 billion so they can telecast the tournament since Uganda Cranes is also featuring after a 41-year absence. Cranes began the 2019 edition with a 2-0 game win against DR Congo.

In the letter, UBC managing director Winston Agaba, explained that UBC had engaged the African Union of Broadcasting (AUB), which gave a final offer of Euros 350,000 (about Shs 1.4 billion) which was a 53 per cent discount from their initial offer.

AUB is a professional body composed of the national radio and television organizations of the African states involved in the exchange of indigenous programming. Now, URN has learnt that UBC is negotiating with CAF and AUB to permit them to show the games and pay them later when the Ugandan government releases the money.

Agaba said that they are negotiating to show the games on credit and pay later when government eventually releases the money in the first quarter of next financial year.

“They wanted us to pay upfront, which we can’t because government can only release money in the first quarter of next financial year” Agaba said.

FUFA had signed an agreement with AUB guaranteeing payment of the funds to enable UBC broadcast the first games. He said they are in touch with FUFA and are hopeful that the remaining games will be broadcast.

Agaba says there hope is that they will broadcast, the Uganda Cranes game against Zimbabwe on Wednesday at 8.00pm EAT. CAF has reportedly demanded that during the games broadcast, the UBC feed be off all Pay TV platforms.

Uganda is currently top of Group A ahead of Egypt on goal difference.

+1 #1 Kelly 2019-06-26 08:22
I said it and will repeat it over and over. Every time a money spending venture is brought as an emergency in Uganda, know that the NRM cabals are gleaning around the carcass called Uganda to scavenge on the little they can lay their ugly and withered corruption laden hands on.

I wish all these thugs' children and grandchildren get to pay for the sins of their forefathers!!!!
Report to administrator
0 #2 kibedi nkuutu 2019-06-26 11:30
Kadaga stated recently in parliament about this issue that 1 bn is little money. Much as this is true, considering the amount of money allocated to all the thieves in NRM, doubt still lingers as to whether AUB will grant Uganda this credit line.

You see, Uganda does not pay its debts! Unless someone is going to get some kickbacks and benefit from that payment.

And our records are well known to ALL African countries, especially bodies like AUB! It will be short of a miracle for them to agree to such a request.

Ugandans should embrace themselves to NOT seeing the African Cup this time round. The Ugandan govt. by the way has other priorities, like financing the State House! Football....give us a break!
Report to administrator
0 #3 WADADA roger 2019-06-27 13:48
On credit, wonders never cease. Government should have negotiated to broadcast the match through a more sensible channel such as NBS with a clear picture, not UBC that some times shows the picture without the sound and some times the sound without the picture, UBC has largely remained UTV
Report to administrator
-1 #4 waiswa muzawalu 2019-06-27 17:58
Uganda has better priorities on which to spend 1 billion shillings.

There are alternative TVs Ugandans can use to watch AFCON live. Please do not waste that money.
Report to administrator
0 #5 Harold kajunga 2019-06-28 00:54
It’s quit embarrassing to have a nation that can’t pay for tv rights.

This is no surprise to most Ugandans,the rate at which Govt institutions countinue to underplay is worry,we have reached an extent we choose to ignore.for God and my country.
Report to administrator