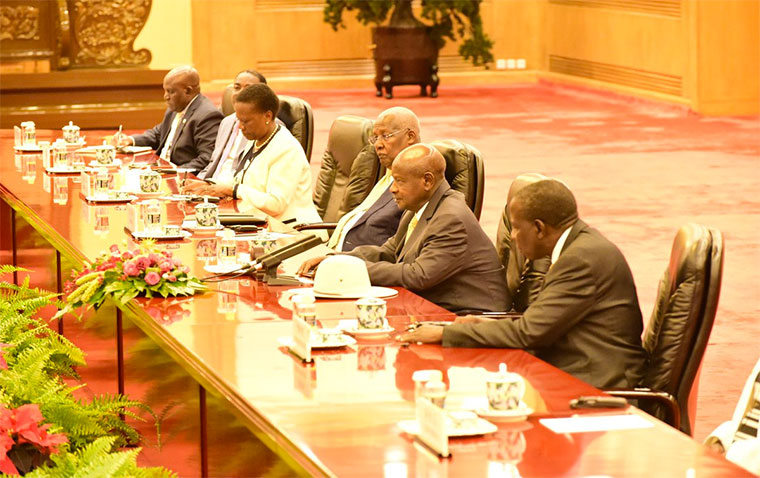 President Yoweri Museveni has lashed at the World Bank for refusing to lend Uganda money to build a railway network. Museveni revealed that the World Bank told off Uganda when it sought for funds, that countries that “build railways use own money.”

He said that such a statement from an economist purports to support Africa’s transformation through private-sector led growth shows that some actors are not serious.

Museveni, who is in China for a four-day visit, told a meeting in Beijing today that Uganda Railways tried to get money to fund railway construction from the World Bank but in vain. The World Bank is one of the multilateral lenders has supported many of Uganda's projects - from schools to roads.

“One of our engineers recently told me that the Uganda Railways tried in vain to get support from the World Bank until one official told them that countries that build railways do so with “their own money," Museveni said.

“How will the private-sector grow if it is bedevilled with expensive transport costs, expensive electricity costs or no electricity at all, expensive cost of money, etc.? It is against that negativity, that China’s solidarity should be measured.”

Government has for the last 10-15 years been in love with financial support from Beijing. Museveni’s speech was at the coordinators' meeting on the implementation of the Follow-up Actions of the Beijing Summit of the China-Africa Cooperation (FOCAC).

This is a follow up on the pledges made by China’s President Xi Jinping to African presidents last September. China pledged, among other things, to offer Africa about $60 billion in financial support. Museveni also praised China and Russia for the role they played in the independence struggles of African countries.

“As we gather here, therefore, we cannot forget to salute the Communist parties of China, the USSR, Cuba and the other socialist countries that constituted the third factor in our emancipation,” he said.

Uganda seeks to construct the Standard Gauge Railway (SGR) from Busia border to Kampala – the first leg of the line. However, government hopes that China can provide money for the project. On the other hand, Beijing is reluctant to commit now because it wants assurance from Kenya that its leg of the line will reach the Busia border to make business sense.

Uganda needs up to $3.2 billion (about Shs 11 trillion) for the SGR to Kampala. As part of the visit, Museveni is expected to preside over the opening of the first ever China-Africa Economic and Trade Expo, which will be held in Hunan Province.

Several Ugandan manufacturers will have their products on display at the Expo which will also be characterized by seminars, presentations and business match-making.

These men feel no shame at all. With a bloated cabinet, stinking corruption, decaying morals, collapsing institutions etc they fly to China to beg (mortgage Uganda) for more money for them to steal.

By the time they leave Uganda, it will take a generation of many years to recover. It is so sickening!

Thank you so much, but,

Why are Ugandans keeping Musevnei on through the tribalistic system that locks them with the demon but, locks them out of the rest of the world?
Report to administrator
0 #22 rubangakene 2019-06-26 22:29
Did you know that the World Bank ( the executors of the defunct East African Community assets) actually paid Uganda Government money for the EAC workers?

Up to now, these people have to beg that money from Uganda government.
Report to administrator
123