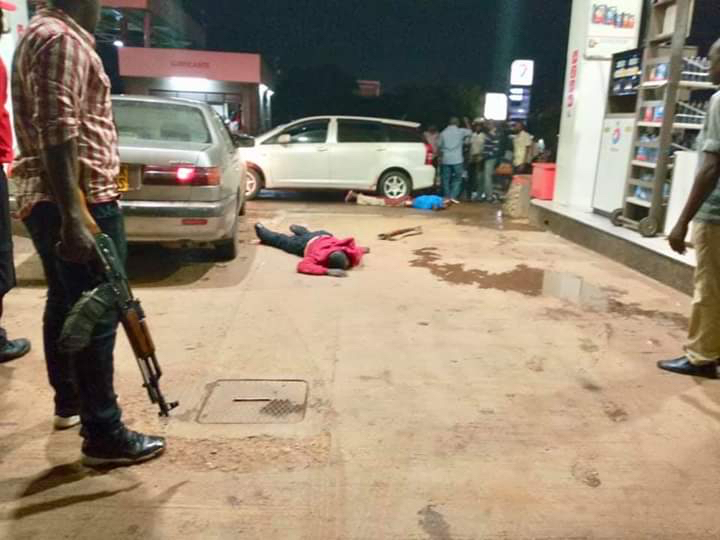 The suspects thugs were gunned down yesterday

The operatives claim they trailed the thugs following a tip-off about a plan to rob the fuel station on Saturday evening. Deputy Kampala Metropolitan police spokesperson, Luke Owoyesigyire, said a gun was also recovered from the thugs.

However, Owoyesigyire said details on their identification and how the robbery was foiled shall be availed later. Dr Besigye drove to the scene as bodies of the suspected robbers lay in a pool of blood.

A gun suspected to have been in possession of thugs was found laying in a pool of blood. Bullet cell casings were also many at the scene. This was going to be the fifth armed robbery in a space of three weeks in Kampala.

Last week two mobile money operators were killed by thugs moving on three motorcycles in Zzana along Entebbe road. Victims of Zzana incident were identified as Harriet Nalwadda and her worker Moreen Nakabubi.

Five days ago police foiled another armed robbery in Kawempe even though the suspects were arrested without fire exchange.

Chieftaincy of Military Intelligence (CMI) and Uganda Police Force arrested three Uganda People's Defence Forces deserters. They include Stanley Muluuta who reportedly killed a UPDF Lieutenant before he deserted. Muluuta was arrested in Masanafu in an operation conducted by FSU and two guns were recovered.

Other ex-soldiers in custody over armed robbery include David Onenchan and Andrew Miguso.

now Ofwono Ofwondo is going to say like this : this robber is People Power because of the red shirt .
Ofwono Ofwondo told the whole nation that the Police has a habit of telling lies .

Why then shall the Ofwono Nation believe the same Police that the dead men were actually robbers ?

Oh yes , there was a robber`s gun in the pool of blood . HaveN´t we heard that Bobi Wine had guns and 16 mobile phones in a Hotel room where he was arrested in Arua ?

Last week , they said that if there was 90 billion legal bu not official money on BoU chartered plane , this must be money put their by the opposition.

Ggwe Remase , you should find a job in NRM . You are also full of STUDIP theories like Ofwono Ofwono
.PP
Report to administrator
-1 #2 Lysol 2019-06-24 00:08
These people seemed to have been shot in the back while fleeing, base on their positions. Why shoot anyone in the back?

Could it have been a set-up and staged to send a message to BK? Anyone's guess.
Report to administrator
0 #3 Odongkara 2019-06-24 10:07
Going by Ofwono Opondo warning on the police for telling lies, I and the nation shouldn't not be fooled into believing these are "robbers" because it is a police lie as usual.

Secondly, what evidence do the police have to prove beyond reasonable doubt that they're robbers?

Thirdly, did the "robbers" engage the police in a gun fight to warrant the fatal shooting of the suspects?

Fourth, can I think this is a repeat of the Kayunga Nantaba saga, to conceal further truth?

The "robbers" could be accomplishes with the police so the need to swiftly put them out of action, silenced forever!

Finally, I think wearing anything red is becoming dangerous as one is summarily executed and the police court judges you a "dangerous robber" post humously.

And we are yet to witness more of these. Exactly doing what Idi Amin's did on the streets of Kampala to rid them of "Kondos" or "armed robbers" and what is the difference then?
Report to administrator
0 #4 kabayekka 2019-06-24 15:35
Too bad for this African government of armed struggles.

Trigger happy murders are now on the increase in this country as more questions are asked than answered!
Report to administrator
+1 #5 Lakwena 2019-06-24 16:24
In other words, a life that is not well observed is not worth living. Pity the parents, wives, children, brothers and sisters of these thugs.

These people seemed to have been shot in the back while fleeing, base on their positions. Why shoot anyone in the back?

Could it have been a set-up and staged to send a message to BK? Anyone's guess.

who is BK actually? It would be ridiculous to assume that to be a reference to the Buganda Kingdom, wouldn't it?
Report to administrator