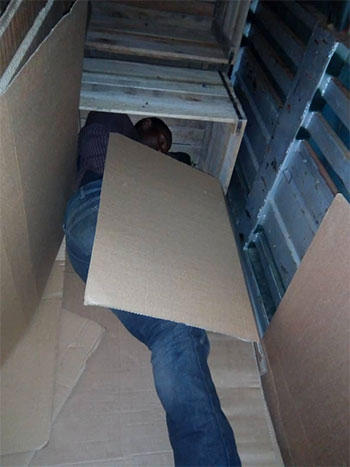 One of the trafficked men

“On scanning the truck, the image showed wooden boxes packed in the truck. However, the officer at the scanner proceeded to the truck with policemen and had the truck opened. As the image revealed, two individuals were found concealed in the boxes,” the tax body said in a statement.

The tax body has not revealed the nationalities of the individuals found in boxes but said they would be handed over to the Internal Security Organisation (ISO) and to the immigration department.

The smuggling of human beings, while not new, calls for increased security risk alertness for the country. The individuals found in the truck have not said where they were heading and what they wanted. But their arrest comes just a day after the US embassy in Uganda issued a security alert to its USA citizens in Uganda, noting that there were rumours of planned attacks.

“There are rumours of impending attacks in areas frequented by expats within East Africa, including Uganda.  The embassy has no substantiating evidence of the threat or information on the timing, but nonetheless warns citizens to take the precaution,” the embassy said.

+5 #1 Lysol 2019-06-21 20:50
Uganda has always been infiltrated by illegal foreigners. Even though Yoweri always brags of being a master security expert in the region.

What a joker! There are many illegal aliens (pretending to be investors) in Uganda than some of it's neighbors.
Report to administrator
0 #2 WADADA roger 2019-06-21 21:32
Unless these guys were fugitives and or terrorists, Uganda is the last place any one would want to go to for greener pasture.

Imagine being transported in a container to Uganda.
Report to administrator
+2 #3 rubangakene 2019-06-21 21:54
What do you expect? This government has made Uganda an 'attractive' ground for all and sundry; people take exceptional risks for the easy-picking, low hanging fruits while the others 'slip in' because we have had our "snouts" in their countries' internal affairs and they want to have their "revenge".

BE VIGILANT, IDENTIFY ALL THESE UNDESIRABLES NOW AND DEPORT THEM IMMEDIATELY!
Report to administrator
0 #4 Zaitun 2019-06-25 09:45
Uganda has already been infiltrated by aliens. Even the top govt. officials are part of that.

It is no longer a question of getting infiltrated, but a composite group of aliens wanting to grab the country out of the hands of Ugandans at all cost.

The day we Ugandans will wake up, it will be too late to be considered true citizens of Uganda but second class citizens. After all they are now so many in every town, controlling commerce and finance, while sending Ugandans to live in down towns.
Report to administrator